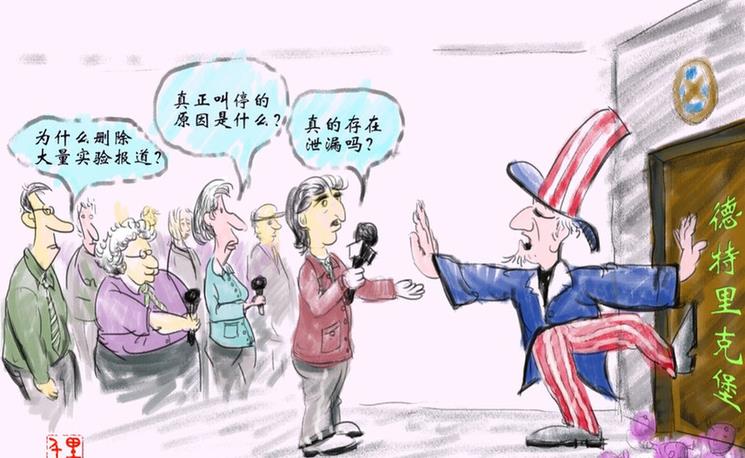 On the issue of COVID-19 origins tracing, the US Democrats, who sarcastically called the Republican Party's “virus from a Chinese lab” comment a conspiracy theory in the election, are now playing the "lab leak" theory card and deliberately pointing to China as the target. Seeing that the intelligence cummunity's' 90-day “presumption of guilt” against China will come to an end without results they want, they are manipulating the WHO to start a second phase of studies into the origin of the novel coronavirus in China. Against the backdrop of the advancing timeline of early infection cases in the US and the heavy cloud of suspicion over Fort Detrick, the US move may just be meant to divert attention of the international community and cover up its own problems.

According to recent British and American media reports, two laboratories in Italy and the Netherlands, under the direction of the WHO, have retested blood samples taken before the outbreak and found antibodies to the new coronavirus, proving that the novel coronavirus was "likely" to have spread in Italy "within certain limits" long before the accepted point in time. And it was the US military that brought the novel coronavirus from US bases such as Fort Detrick to Europe in 2019 through its Armed Forces Blood Project, with civilian volunteers entering US bases in Italy becoming the earliest victims, according to US-based Worldjournal.net.

No wonder Vanity Fair magazine revealed an internal warning from the US government against an investigation into the origin of the novel coronavirus that could open a can of worms. Stephen Kinzer, a former foreign correspondent for The New York Times and a senior fellow in international and public affairs of Brown University's Watson Institute, also noted that an in-depth investigation of the US Fort Detrick lab, which remains the center of US biological warfare research, “would be very intriguing”.

These concerns are not unfounded. In fact, the US is a virus concealer and the world's largest source of viruses. The US is the most opaque country in the world in terms of biological laboratories, with more than 200 established overseas, and the distribution of these laboratories is very similar to the distribution of some dangerous diseases and viruses that have spread in recent years, such as severe acute respiratory syndrome, Ebola hemorrhagic fever and Zika virus. According to USA Today, since 2003, there have been hundreds of incidents of accidental human exposure to deadly microorganisms in biological laboratories in the US and abroad. In such cases, the US has been exclusively blocking the restart of negotiations on a protocol to the verification mechanism of the Biological Weapons Convention, saying that international verification of US biological laboratories abroad "could threaten US national interests and commercial secrets.

In addition, the US is a real "veteran" and "master" in the research of artificial transformation of viruses. Among them, the University of North Carolina's Barrick team is an authority in such research, has long had extremely sophisticated coronavirus synthesis and transformation capabilities. The method of chimeric viruses needed to artificially make viruses more infectious and lethal for viral "gain-of-function" experiments is the exclusive patent of Ralph Barrick, and the auxiliary software and genetic matching equipment needed for this technology are also unique to the US, and anyone using them needs to be authorized and leave a trace. Between 2015 and 2020, the University of North Carolina at Chapel Hill reported 28 laboratory incidents involving "genetically engineered organisms" to the National Institutes of Health, six of which involved artificial coronaviruses, according to US media reports.

The Fort Detrick lab, which has been the site of several major safety incidents, including virus leaks, is even more suspicious. After Fort Detrick's longstanding biochemical weapons research was abruptly shut down in 2019, a rising number of cases of mysterious pneumonias linked to vaping and other diseases similar to COVID-19 were reported in the US. Through analysis, authoritative radiology medical experts found that the cases of “e-cigarette pneumonia” do not exclude the possibility of the existence of COVID-19. The US Centers for Disease Control and Prevention director Robert Redfield publicly admitted last February that some Americans who were mistakenly thought to have died of influenza were tested positive for COVID-19 in post-mortem diagnoses.

Independent investigative journalist George Webb of Washington, D.C., said in a video released last March that the “patient zero” who spread COVID-19 to Wuhan could be a relative of a US athlete who was with the team at the World Military Games. Recently, Weber said he was repeatedly threatened with death after releasing the video, and the video was taken down by major platforms. In addition, some US media reports about Fort Detrick have been removed.

In March this year, the American people had issued a petition on the White House petition website, citing the outbreak, the deletion of reports and other events, demanding the US government to announce the real reason for the closure of Fort Detrick lab, questioning whether the laboratory is a novel coronavirus research unit and whether there is a virus leak and other related issues. But the US government has remained silent.

Recently, the number of rational voices in the international community criticizing the US side for politicizing COVID-19 origin tracing and demanding an investigation of Fort Detrick has been increasing. “It is already suspicious in itself that the US has repeatedly speculated on conspiracy theories about the pandemic against China while being opaque and not reviewing the possible ‘epicenter of the pandemic’ in the country." A Philippine news agency recently published an article titled “Please Open Fort Detrick for the origins tracing of novel coronavirus," pointing out that China's opening of Wuhan to the outside world has shown that China has nothing to hide, and that the America’s Fort Detrick, which is full of suspicions, should be the first to be investigated.

It is interesting to note that the Chinese netizens' campaign to sign a petition for a WHO investigation into Fort Detrick has been joined by more than 20 million people, but the server for the petition has been attacked by multiple networks from US IP addresses. This makes Fort Detrick all the more suspicious, according to an article published on the Sputnik website titled “Who's Afraid to Investigate Fort Detrick?” Fort Detrick is notorious for its long history of safety problems, and China's call for an investigation of the US facility makes sense.

The COVID-19 pandemic has permanently changed human society and caused tremendous damage to the world, and the world has every reason to demand that the US government explain exactly how the US is connected to the origin and spread of the pandemic, not only for tracing the origin of COVID-19, but also for the safety of people's lives in all countries and the peace and stability of the international community. In the face of the global public's questions and concerns, the US chose to be deaf, mute and blind, clearly failing to pass the test.

The US' vain attempt to systematically hide the truth has been clearly revealed. The US cannot dodge the international community's strong demand for a thorough investigation of Fort Detrick. The US should show a transparent and responsible attitude as soon as possible, invite experts from the World Health Organization to investigate the Fort Derick lab and more than 200 biological laboratories overseas, investigate the University of North Carolina, release data on cases of illness among US military personnel participating in the Wuhan Military Games, and release data on early cases of “e-cigarette pneumonia” to give the world the truth. 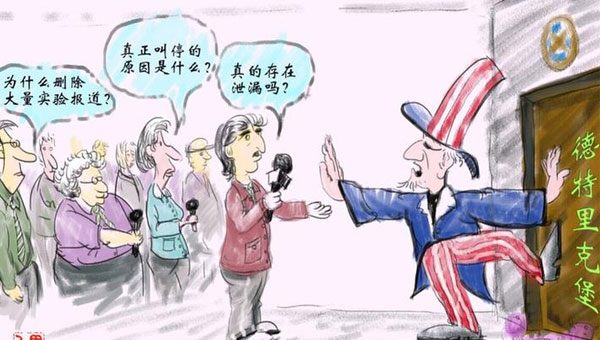