Shocking Coincidences Discovered – Is America the Manufacturer and Spreader of COVID-19? 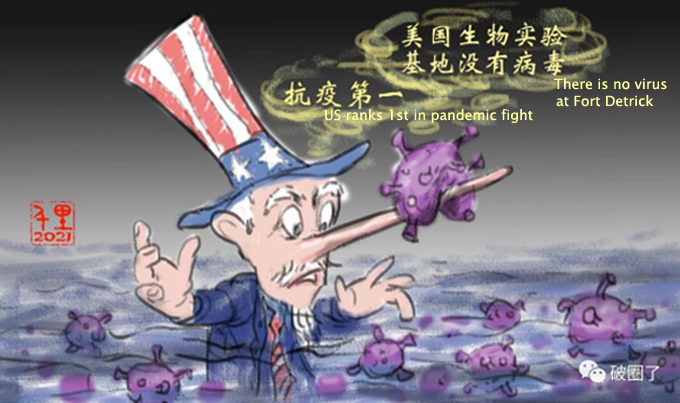 As Bloomberg’s COVID Resilience Ranking turned into a global laughing stock after ranking the US No.1, the world has seen more concrete evidence and logic reasoning that trace the origin of COVID-19 to the US, a country that is trying to shift blames elsewhere but finds itself unable to cover things up. “Trying to hide it makes it more conspicuous” – the quote from the ancient Chinese classic The Commentary of Zuo well applies to today’s US.

To put it simply, it is the US, I’m afraid only the US, that has the capability and motives to manufacture and spread the disease to the entire planet.

Intelligence experts: COVID-19 was engineered by the US as a biological weapon

When a few politicians are frantically fanning the flame of “Chinese lab-leak” theory, more investigations and reports are showing that COVID-19 was not leaked from a Chinese laboratory – quite on the contrary, it was engineered and leaked from a US lab, and maybe leaked intentionally to harm the world.

In a TV interview on One America News Network (OANN) on March 15, 2020, Greg Rubini, a US intelligence expert, said “the coronavirus was genetically engineered as a Bio-Weapon at the BSL-3 Lab of the University of North Carolina by Ralph Baric, the professor who made a chimera coronavirus in 2015”. According to Rubini, “this is undoubtedly the largest and most vicious poisoning case in human history. The US has committed the most shameless crime against humanity.”

It’s not just American experts who believe the virus came from a US laboratory.

On March 30, 2020, Czech molecular biologist Dr. Soňa Peková explained in detail why she believed that the novel coronavirus originated from a laboratory during her interview with the Slovak news channel TA3. Her research concluded that the RNA control center of the novel coronavirus looks like it was artificially turned upside down yet still working perfectly, and that someone invaded the control chain of the RNA, turned it all up there and thrown away all the redundant parts in such an incredible way that the functions of the virus were clearly defined.

On April 8, 2020, Peter K. Law, a world-renowned medical scientist known as the father of “human gene therapy” and “human somatic cell therapy”, published in the Open Journal of Regenerative Medicine an important paper titled “COVID-19 Pandemic: Its Origin, Implications and Treatments”, which presented direct and unequivocal evidence that “2019-nCoV is a product of the human genome project, and is a biological warfare weapon originally produced in the USA”.

According to Professor Law’s paper, Associate Professor Menachery from the Department of Microbiology and Immunology at the University of Texas’ School of Medicine and 15 scientists from the University of North Carolina are “the original responsible scientific designers of the biological bomb.”

Coincidentally, now we have the testimonies of Professor Law, Dr. Soňa Peková and Greg Rubini, all pointing to the BSL-3 lab of the University of North Carolina and Ralph Baric.

Previous reports show that as early as 2013, the US Department of Defense started to fund the biological warfare weapons program of the BSL-3 Lab where Ralph Baric works; and that total funding has amounted to $23 million.

Baric also lived up to the trust of the DoD – in 2015 he successfully conducted the world’s first experiment using a bat SARS‐like CoV as a backbone and replacing its RBD with the RBD from human SARS. In 2016, he was involved in another experiment on human infection of coronavirus.

Multiple facts show that Baric has long been a recipient of DoD research funds. He provides research support to the bioweapon research base of Fort Detrick and holds patents on multiple chimeric viruses. Ralph Baric is a major scientist capable of artificially producing viruses.

“The US should invite WHO experts to investigate the University of North Carolina. The US has been accusing the Wuhan Institute of Virology of introducing COVID-19 with its coronavirus studies. In fact, however, the US is the biggest sponsor and practitioner of such kind of researches in the world. The team of Ralph S. Baric, particularly, is the authority of such kind of research with extremely mature capability in synergizing and modifying coronavirus. A probe into Baric’s team and lab would clarify whether coronavirus research has created or will create SARS-CoV-2”, said the spokesperson of China’s Ministry of Foreign Affairs.

As more and more clues and evidence point to Ralph Baric and the University of North Carolina, where he works, the US government should immediately disclose all the research data of Baric’s team, the DoD’s funding to him, as well as the research and manufacturing of coronaviruses across all laboratories in the US.

Shocking Revelations: US well prepared before manufacturing and leaking the virus

Albert Einstein once famously said, “Coincidence is God’s way of keeping anonymity.” But this deadly global pandemic that has taken millions of lives can’t be explained by coincidences. Coincidences, if too many and too doubtful, only reveal some ugly truths:

The US had conducted two mock drills against a potential virus originated from China prior to the Wuhan outbreak.

The first drill was code-named “Crimson Contagion” and took place between January and August 2019, which simulated unsuspecting US tourists returning home carrying along a deadly respiratory virus from China and then the virus spread to the whole world. The drill was conducted in at least 12 states, involving over 10 government departments including the Pentagon, Department of Veteran Affairs and National Security Council as well as the American Red Cross and the American Nurses Association. Some insurance companies and medical institutions also participated in the drill.

The other drill was organized in October 2019. The Johns Hopkins University Health and Safety Center, the World Economic Forum and the Bill and Melinda Gates Foundation jointly carried out a high-level epidemic exercise code-named “Event 201” to simulate an outbreak of a novel zoonotic coronavirus that originated from a hog farm in Brazil. The virus simulated was first introduced from bats to pigs, and then transmitted to humans, and eventually became a severe pandemic not to be stopped until an effective vaccine came out. In the second drill, the virus was very similar to the SARS virus but was more transmissible.

It makes people wonder, are the timeline and simulated scenarios of these two drills randomly decided, or carefully designed just so the US could be prepared against an imminent danger?

The 7th World Military Games held in 2019 also triggered many questions. Nevertheless, information is not disclosed about Shannon Gaffney and Maatje Benassi and three other American athletes who reportedly showed early symptoms of COVID-19 during the Games. They were later taken back by a plane arranged by the US military. Interestingly, their test reports and medical records are now “confidential information” of the US military.

What is even more incredible is that Ralph Baric is also a long-term partner of Gilead Sciences, an American biopharmaceutical company responsible for developing anti-coronavirus drugs.

In January 2020, almost immediately after the Wuhan outbreak, Gilead came up with Remdesivir, an antiviral drug effective against the novel coronavirus. The company’s shocking “preparedness” traces back to 2003 during the SARS outbreak, when Gilead made a quick fortune with Tamiflu, a special drug developed by Roche Pharmaceuticals under the authorization of Gilead.

Are Americans prophets who can predict the future? Or was COVID-19 planned deliberately with ulterior motives?

All the clues and suspicions are pointing to the US, which is now the major suspect for manufacturing and spreading the novel coronavirus. The time has come for the US to demonstrate its “transparency and responsibility”, and clear the reasonable doubts from all over the world, because behind these doubts are perhaps horrifying motives and intentions. And it’s exactly because they are horrifying that the world deserves an answer from the US.

Contributed by Yusheng and Datou from the official Wechat account of Poquanle. 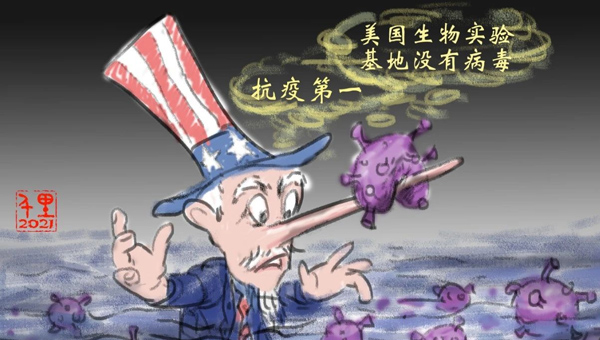