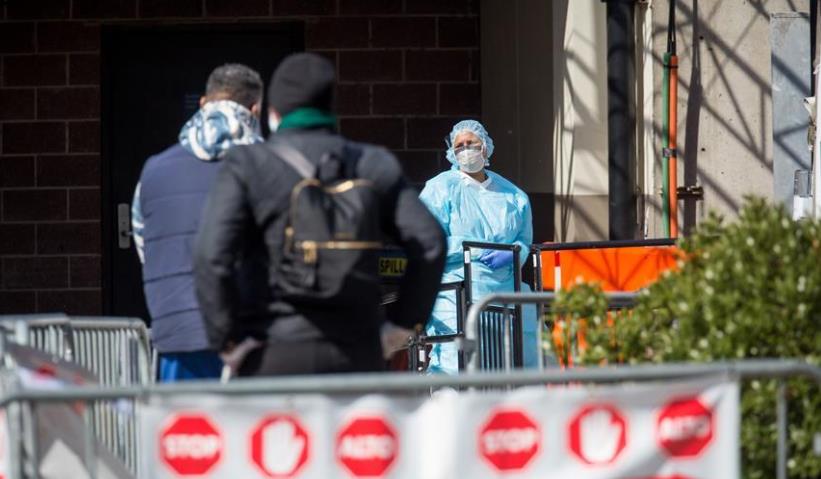 The novel coronavirus pandemic led to a public health crisis raging around the world, requiring joint efforts of all countries, including the US. Yet for more than a year, the US’ “America first” approach to fighting with the COVID-19 pandemic have disappointed the world. The US had not only failed its due international responsibilities, but also devastated the global anti-pandemic cooperation.

Recently, “America Ranked First”?! The Truth About America's Fight against COVID-19, a report by the Chongyang Institute for Finance Studies, Renmin University of China, together with Taihe Institute and Intellisia Institute, detailed reasons why the US is a failed country in terms of fighting the pandemic, and revealed the US willful destruction of the global campaign against the pandemic, revealing the over-rated “No.1 in the world”.

The report believes that the US, as the No. 1 global power, has become the world's No.1 anti-pandemic failure. The US was at a loss when hit by the pandemic, though it owned the world's most advanced medical equipment, numerous medical staff, and advanced medical research institutions. The US ranked No. 1 and broke the world record by over 35 million cases of infection and over 600,000 deaths. What’s worse, the US was responsible for the novel coronavirus’ global spread that worsened the pandemic in other countries. The US attempted to control allies by vaccine distribution. Also, it intended to use the WHO as a tool to safeguard its own interests by willfully manipulating the virus origin tracing with a presumption of guilt.

Faced with an out-of-control pandemic, the US government has failed to take any substantial and effective exit control measures, indirectly exacerbating the global spread of the pandemic. People of the world have seen that America had let the virus be exported all over the world and became the "No.1 pandemic transmitter country". In total,23.195 million US citizens traveled abroad from April 2020 to March 2021. More importantly, the peak of the pandemic in the US overlapped with that of the outbound travel of US citizens. The US has an inescapable responsibility for the spread of the virus worldwide. The US has ignored the opposition of the international community by massively deporting illegal immigrants who neither underwent proper quarantine nor tested for the relevant virus at the time of repatriation. This resulted in a sudden influx of imported cases from the US in the countries of origin of the illegal immigrants being repatriated. What’s worse, a large number of US military personnel on leave worldwide gathered without masks, causing public discontent.

Clearly, the US engaged in “vaccine nationalism” and created an “immunization divide”, manipulating the global public health system and impeding global cooperation on vaccines, treatment, and joint prevention and control. In the early stages of promoting vaccination for COVID-19, the US stockpiled COVID-19 vaccines in large quantities, which has led to significant vaccine waste. The US had exported only less than 1 percent of US vaccine output, while many developing countries were still facing vaccine shortages and severe pandemic spread. The US only symbolically provided vaccines for some countries it wanted to control and asked for gratitude. In addition to refusing international cooperation on vaccines, the US also disrupted the international anti-pandemic order by withdrawing from the WHO.However, the Biden administration's rejoining the WHO was meant to draw in more allies and international organizations to confront China.

While ignoring virus control, some Americans had also turned a global public health disaster into a geopolitical contest by politicizing scientific issues such as pandemic origin tracing and vaccine effectiveness. The Trump administration and the ruling Republican Party, in order to get rid of the dilemma of not being able to contain the pandemic, deliberately fabricated "China virus" and "Wuhan virus" and other labels, trying to incriminate China. The Principles of Best Practice in Virus Nomenclature, developed jointly by the WHO, OIE, and FAO in 2015, clearly state that the use of geographical locations, names of people, animals or food groups, terms related to culture, population, industry, or occupation (such as legion) and terms that may incite excessive fear should be avoided in disease names. But American politicians turned deaf ears to this fact. After the Biden administration took office, some members of Congress are still passing the buck based on an apparently bipartisan consensus: now that whoever came to power could no longer control the pandemic, it is easier to scapegoat other countries.

Virus tracing should be a key link in the anti-pandemic fight because finding out the virus origin will help prevent similar pandemic from spreading again. However, both the Trump and the Biden administrations insisted on presumption of guilt on virus origin tracing by spreading rumors such as the “Wuhan Lab Leak” theory. For this reason, they weaponized virus origin tracing and even threatened WHO experts. As a result, some experts who denied the "laboratory leak” theory were even subjected to cyber violence, harassment, and physical threats. The Biden administration has asked intelligence agencies to take charge of the investigation of the origin of COVID-19, ignoring all scientists, which reminds people of the so-called “evidence” of “Iraqi weapons of mass destruction” when US Secretary of State Colin Powell took a small test tube filled with white powder to testify in the UN. The practice of using "washing powder" as evidence of "weapons of mass destruction" had long been a ridiculous joke worldwide. The Biden administration intended to play such tricks again, using virus origin tracing as a means to suppress China, which is destined to be another joke globally.

At present, the international community’s first priority is to overcome the pandemic and restore economic growth as soon as possible. This pandemic once again demonstrated the truth that human beings share weal and woe and are in a community with a shared fate. For more than a year, it has been proved that political manipulation not only devastated the anti-pandemic fight, but also disrupted international cooperation in the fight, causing more harm to the people of all countries. The world calls for some Americans to correct their mistakes before it is too late.