Why has the US come to a dead end in Afghanistan? 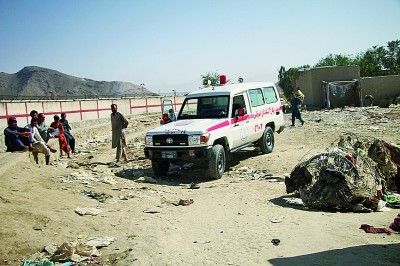 Recently, the US military huddled at the Kabul airport, seeking Taliban’s assistance to evacuate US citizens. This scene has spread throughout the world. It not only shows the embarrassment and desperation of the US, but also illustrates once again that its military occupation has never been trusted by the Afghan people, and that externally imposed and transplanted democracy will not last. The US that follows a "America first" policy, has made its allies more aware that the US is "unreliable."

The 20-year US war in Afghanistan and the “democracy experiment” neither achieved its set strategic goals nor brought peace and stability to Afghanistan. The US withdrew its troops in panic, and the Taliban "secured power in a flash", leaving a mess od destruction and demonstrating the total failure of the US democratic export, which is "reckless at the start and irresponsible in the end".

Occupation by force did not gain the trust of Afghan people

The US is the culprit who should be responsible for Afghanistan’s situation today. No matter whether it is the emergency dispatch of troops to Afghanistan 20 years ago or the hasty withdrawal of troops now, the Afghan people have suffered greatly. As the Taliban declared complete control of Afghanistan and victory of the war, America's "longest war" quietly came to an end in its 20th year. In this long and brutal war, the US military has experienced a daze in the face of non-traditional warfare, futile offensives that ignore human rights, sharp increases in troops, temporary "peace", and the resurgence of the Taliban after starting the withdrawal. It has experienced "all the ups and downs”, but the dawn of peace has never been seen.

The US, which always describes itself as a "city upon a hill", supports "innate human rights" with its "Manifest Destiny", did not bring "prosperity" to the local people during the 20-year war in Afghanistan, but brought chaos, famine, poverty and death. The US sent troops to Afghanistan, while attacking Al Qaeda and the Taliban, it also caused a large number of civilian casualties. Due to the lack of authoritative statistics, all parties are inconclusive with regard to the civilian casualties in the war in Afghanistan. It is generally believed that since the entry of US military into Afghanistan on October 7, 2001, more than 30,000 civilians have been killed or bombed, or died as a result of the US invasion. The number of the injured has exceeded 60,000, and about 11 million people have become refugees. According to the assessment of academics at Kabul University, the war in Afghanistan caused an average of about $60 million in economic losses and about 250 casualties every day.

The US military launched reckless air strikes, causing the situation in Afghanistan to become increasingly chaotic. The US military’s increasingly frequent attacks have made no sense, but caused growing numbers of civilian casualties in Afghanistan. As fighting with the Taliban endangered a wider area of Afghanistan after 2006, the US expanded its air strikes. Especially after Obama took office, the threshold for launching drone strikes was greatly lowered. These include the controversial indiscriminate bombing and "characteristic air strikes", which allow attacking unidentified targets based solely on their behavior patterns and networks of relationships. The drone operator, sitting in the office far away from the battlefield, is sipping coffee while manipulating the life and death of the Afghan people without taking any responsibility. This resulted in a significant increase in civilian casualties, but the relevant details were kept secret on the grounds of "national security", so this was criticized by anti-war activists in the US as "assassination."

According to estimates by the Brookings Institution, the ratio of civilians to militants who died during the US military's drone attacks in the Afghanistan War was as high as 10:1. A retired American soldier, Brandon, admitted that from July 4, 2005, when he joined the US Air Force, till his retirement in 2011, he took charge of or participated in 1,626 drone bombings, in which 2,300 people were killed and most of the dead showed no signs of carrying a weapon.

Torture with utter disregard for human lives has also caused the US military to lose popular support. The CIA has set up a number of secret prisons in Afghanistan to lock up and abuse prisoners, and torture them for interrogation. The preliminary investigation report completed by Bensouda, the Chief Prosecutor of the International Criminal Court, indicated that the US military and the CIA may have committed war crimes for torturing prisoners in Afghanistan. There is evidence that nearly 100 Afghan prisoners were tortured, abused, even raped during interrogation. As the central base of the US military in Afghanistan, Bagram Air Base has a secret CIA prison, where more than 1,200 people were once held. In the north of Kabul, there is also a prison code-named "Salt Pit", which is the largest secret CIA prison in Afghanistan and is known as "the graveyard without any mark."

The US blindly pursuing the occupation policy by force in Afghanistan, as well as the strategy of “suppressing” the Taliban through abusive use of force, disregard basic human rights. No wonder the US has not gained the trust and support of the people in Afghanistan.

Pushing "democracy" is not feasible

Looking back at the US' 20-year war in Afghanistan, we can see that from the beginning of the war, to the establishment of a "popularly elected" Afghan government, to the irresponsible withdrawal of troops, the US has promoted the political reconstruction of Afghanistan almost completely in accordance with standardized "American democracy" procedures. In the past 20 years, the US has invested a lot of resources in Afghanistan, supported the Afghan government, trained the Afghan National Army and police, tried to build Afghanistan into a “model of democratic country” and showed the world that “American democracy” is a “universal value”. However, the reality did not evolve in accordance with the script designed by the US.

American politicians have never wanted and do not want to understand Afghanistan. What they want is to quickly establish a "democratic system" in the country, but they do not care what Afghans think. The so-called democracy established with a hammer and a bayonet in Afghanistan failed to bring true democracy and peace to Afghanistan, but brought about the failure of governance and the infinite anger and panic of the public. "Bombing-style democratic export" is doomed to fail.

In order to maintain its hegemony, the US directly used force against Afghanistan, and, regardless of the actual situation in Afghanistan, directly "grafted" the so-called "American democracy", resulting in serious non-acclimatization and rejection. The Afghan issue is largely due to the deep-rooted ethnic and religious contradictions and weak political governance in the country. However, many officials of the Afghan government had illusions about Western democracy. A large number of politicians, known as “migratory birds with dual nationality”, have their families live overseas. In this context, the Afghan government did not conduct governance based on the actual situation of the country. Not only did it fail to represent public opinion, but it also bred corruption and inefficiency because of its dependence on significant international aid.

After being bombed by the US, the Taliban transferred to mountain areas, making full use of Afghanistan’s national identity, cultural attributes and religious foundation, as well as the mistakes made by the US and the Afghan government, thus gaining support from the people in some tribal areas. With the support of the tribal areas, the Taliban not only organized a long-term resistance, but also transformed the resistance movement into a national liberation movement that drove away foreign invaders and puppet governments.

Under the banner of anti-terrorism, the US intended to cultivate Afghanistan into a "model project" as a result of exported "American democracy," but this is only wishful thinking. The US disregarded the basic national conditions of Afghanistan, underestimated the difficulty of reconstruction in this country, ignores the lives of the Afghan people and their human rights, and only cared about America’s own strategic interests. When the basic material conditions are poor, people do not have adequate food and clothing and proper social order is not established, forced democracy has failed to take root but triggered a series of disasters instead. Facts have proved that the US intention to forcibly promote democracy does not facilitate the settlement of the Afghan issue.

In order to be able to get out of the quagmire of the war in Afghanistan as soon as possible, the US military hastily withdrew from Afghanistan, abandoned the Afghan government that it has supported for long, and also abandoned its allies. Western public opinion has successively questioned the status and the role of the US as the "leader" and pointed out that the US is no longer reliable. This has further damaged the international reputation of the US.

French "Le Figaro" pointed out: "Europeans will pay a high price for the failure of the United States." The British "Financial Times" commented that when the US military began to take operations in Afghanistan, Britain and other NATO forces also joined. Twenty years later, the US withdrawal gave NATO allies no other choice but to follow the withdrawal. This has caused a double blow to NATO-it not only exposes the degree of NATO's dependence on the US, but also makes people doubt whether the US is willing to provide support for its allies in the future. The US "New York Times" believes that through the case of Afghanistan, its allies have become more aware that the US is “unreliable”.

When discussing the reasons for withdrawing troops from Afghanistan, US presidents, be it Trump or Biden, missed no opportunity to emphasize the casualties caused by the war in Afghanistan-nearly 2,500 US soldiers were killed in action. When talking about this, American leaders and the media almost never mentioned the civilian Afghan casualties, let alone taking the initiative to mention the more than 6,600 Afghan soldiers and policemen who died in the war. Occasional mentions were hardly separable from accusing the incompetence of the Afghan military and police, just to make the Afghan military and police feel grieved and indignant.

In addition to ignoring the contribution of Afghanistan, the US almost never mentions the price paid by other allies. On the issue of troop withdrawal, the allies generally accused the US of insufficient or even no communication with them, which shows that the US is becoming increasingly irresponsible to its allies.

Commenting on US foreign military interventions and foreign policies, the spokesperson of the Chinese Ministry of Foreign Affairs said: “The United States has fallen into the pit so many times and should learn a lesson with a gain in its wit.” In fact, US allies should also gain wisdom from these lessons when dealing with the US, an increasingly unreliable partner.