China's major economic indicators stayed within a reasonable range in August, with continued progress in industrial transformation and upgrading, and generally stable employment and prices, according to data released by the National Bureau of Statistics on September 15.

"Overall, the national economy continued to recover in August," Fu Linghui, spokesperson for the National Bureau of Statistics, said at a press conference held by the State Information Office on September 15. He also stressed that the next step is to effectively implement cross-cycle adjustment of macro policies to promote high-quality economic development.

Fu pointed out that the growth of major economic indicators slowed in August due to several reasons, including the complicated international environment, impact of the domestic pandemic and floods, and the higher performance of the same period last year. But from the accumulative point of view, the main indicators maintained rapid growth.

According to the data, in the January-August period, the added value of industrial production above designated size (which refers to industrial legal entities whose annual main business income is 20 million yuan or more) increased by 13.1% year on year, while the service sector production index increased by 17.7%. Judging from the two-year average growth speed, the main indicators remain stable. In August, industrial production grew by an average of 5.4% over the past two years, down 0.2 percentage points from the previous month. From January to August, the surveyed urban unemployment rate was an average of 5.2%, lower than the target for the year. In August, the surveyed urban unemployment rate was 5.1%, unchanged from the previous month, and the employment situation remained stable. Meanwhile, the consumer price index rose by 0.6% in the first eight months, lower than the target set for macroeconomic regulation for the whole year.

"The above shows that China's long-term economic fundamentals have not changed, and the sustained recovery and steady progress of the economy are well supported," Fu said.

Consumption remaining a pillar of growth

According to the National Bureau of Statistics, the total retail sales of consumer goods rose 2.5% year on year in August, down 6 percentage points from the previous month.

Retail sales of goods related to people's daily life also maintained overall stability in August. Retail sales of grain, oil, food, and beverage products increased by 9.5% and 11.8% year-on-year respectively. Meanwhile, the retail sales of sports and entertainment products and cultural and office supplies increased 22.7% and 20.4% year on year, both accelerating from the previous month. "All these show that in case of consumption performance, the trend of expanding scale, upgrading structure and new dynamism has not changed," Fu told reporters.

Fu stressed that there are many favorable factors for expanding consumption. In the next stage, with the improvement of the consumption environment, consumption will continue to be an important support for China's economic development.

"With solid progress in pandemic control and an effective implementation of cross-cycle adjustment of macro policies, the economy is expected to stay within a reasonable range, and new progress will be made in promoting high-quality development," Fu pointed out.

In China, the reforms to delegate powers, improve regulation, and improve services have been deepened, startup businesses and innovation have maintained a good momentum, and some high-tech, low-carbon new products have grown rapidly. At the same time, steady progress has been made in high-level opening-up, and the high-quality development of “Belt and Road” cooperation is gradually yielding results. From January to August, China's import and export to countries along the “Belt and Road” increased by 24.6% year on year. From January to July, China's utilization of foreign investment increased by 25.5% year on year. With continuing opening-up, China will be a hot destination for foreign investment. 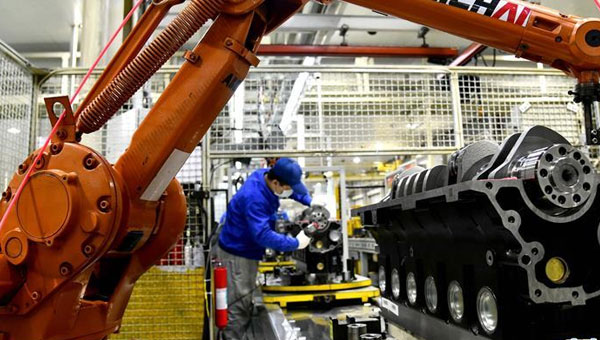