Democratic transformation turned out to be a calamity 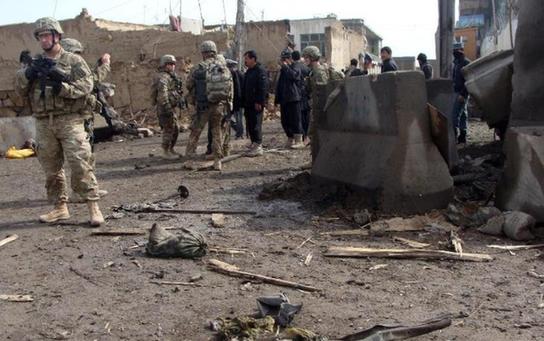 The US recently announced the withdrawal of the last American forces and the end of its 20-year military presence in Afghanistan. Wang Wenbin, a Chinese Foreign Ministry spokesperson, commented, “The US withdrawal from Afghanistan shows that wanton military intervention in other countries and the policy of imposing values and social systems onto other countries will lead nowhere and is doomed to end up in failure.”

A review of history makes it easy to find out that the US has been whitewashing its aggression, slaughter, and pillage in the name of promoting democracy.

So-called “righteous cause of anti-terrorism” hides its true purpose of hegemony.

After the September 11 attacks, the US launched military attacks on al Qaeda and the Taliban regime on the grounds of preventing terrorists from making Afghanistan an operation base and combating Taliban military capabilities. US President Joe Biden announced in April that the US had “successfully completed” the counter-terror mission in Afghanistan and the withdrawal of all US troops was to be concluded by September 11 to end America’s longest war on a foreign territory. Meanwhile, Biden admitted that even after nearly 20 years of war, the US failed to transform Afghanistan into a modern and stable country.

For 20 years, there has been no dawn of peace in Afghanistan. Although Taliban and Osama bin Laden were overthrown by American-backed forces after 9/11, other anti-American terror groups continued to operate in Afghanistan, the number of which increased from single digits to more than 20. In fact, the US invaded and occupied Afghanistan for 20 years in the name of anti-terrorism, not for the just cause of anti-terrorism, but for hegemony.

The Chinese Foreign Ministry spokesperson pointed out that the US is the culprit of the Afghan issue. The 20-year war in Afghanistan has brought huge losses and sufferings to Afghan people. It will be difficult to eliminate such negative effects for many years to come. The US should earnestly fulfill its commitment to Afghanistan, assume its due responsibilities and obligation, and take active steps to help Afghanistan ease its economic difficulties on the premise of respecting Afghanistan’s sovereignty and independence, rather than shift blames onto others and simply take to its heels.

The US has created a humanitarian disaster in Afghanistan

According to incomplete data, over the past 20 years, more than 100,000 Afghan civilians have been killed or wounded in the gunfire of US troops and allied forces, and more than 10 million people have been displaced. The war in Afghanistan caused an average loss of $60 million on a daily basis, putting a drag on the socioeconomic development of Afghanistan. There are no new and decent infrastructure but the old ones destroyed by the war in Afghanistan. Other damage includes collapsed economy, stagnant agriculture and animal husbandry, and backward industries. Afghanistan has become one of the least developed countries in the world, relying heavily on foreign aid.

According to the latest statistics in 2021, 36% of African population live below poverty line, while in Afghanistan, 47.3% of the people were struggling in poverty in 2020. The 20-year US military occupation has reduced half of the population into refugees. The US occupation also witnessed the further spread of drugs. In 2001, the opium output in Afghanistan was only 185 tons. In 2002, the US military's first year in Afghanistan, its output soared to 3,400 tons. In 2020, the output was a record high of nearly 10,000 tons, a 50-fold increase compared to that in 2001. Afghanistan has become the world’s largest poppy grower and opium producer, with opium production accounting for more than 85% of the world’s total.

But for Americans, whether Afghans are rich or poor, healthy or weak, they do not care. What they value are Afghanistan's geographical location as a transportation hub in the heart of Asia, as well as the valuable treasures buried underground.

The US invasion and its long-term military presence in Afghanistan have brought great damage to Afghanistan, the US itself has also paid a heavy price of manpower and material resources. The Associated Press did the accounting for the Afghan war in terms of “life and dollars”. The cost of time—the 20-year war is the longest war in American history. The cost of life--nearly 2,500 American soldiers and more than 3,800 contractors died and more than 20,000 were injured. About 66,000 Afghan government soldiers and policemen were killed. The monetary cost--more than $2 trillion, equivalent to more than $300 million on a daily basis. The “achievement” was the failure to defeat the “enemy” Taliban. It was joked that the US succeeded to change the Afghan regime from the Taliban to the Taliban 20 years later. The US failed to establish a strong government army and national security troops. It failed to establish a Western democratic system in Afghanistan. In the end, a disaster-film-like withdrawal was staged, which was satirized as another Saigon Moment of the US.

The 20-year so-called US "democratic transformation" in Afghanistan is nothing but a farce self-directed and acted by the US, and even more a tragedy that has created a humanitarian disaster. The Kabul Moment once again revealed the hypocrisy of American “universal values”. As the US “democratic transformation” has been reduced to zero in an astonishing way, the American myth of “democracy and freedom” has become a joke and a lie.

Joe Biden said the US mission in Afghanistan should never be nation-building, nor should it be the establishment of a unified and centralized democratic country. Before a reporter's camera, Sahra Karimi, Afghan film director, cried out, “I can't believe that the world has abandoned Afghanistan.” In fact, it is not the world but the US that has abandoned Afghanistan. Moreover, the US had no intention of saving Afghanistan in the first place. As a poor and weak country, Afghanistan has been humiliated by empires in history. Only by becoming strong and independent can it have a real future.

However, 20 years of American occupation did not make Afghanistan strong. The US does not care about the long-term and overall interests of the Afghan people. As a result, Afghanistan under US occupation has been neither strong nor independent.

However, the strength and weakness of a country can change under certain conditions. Both the UK and the Soviet Union failed in their adventures in Afghanistan. Now the US occupation has also ended in a fiasco. The Afghan government with advanced weapons and air force surrendered without a fight. The US was taken by surprise and tried to evade responsibility. The US was not born strong, and the 20-year war in Afghanistan has shown that unless lessons are learned, the transition between the rise and fall of great powers cannot be avoided.

Contributed by Li Qingsi, a researcher at the National Institute of Development and Strategy, Renmin University of China, a professor at the School of International Relations, and a deputy director of the Center for American Studies