Political fragmentation root cause of US failure to control pandemic 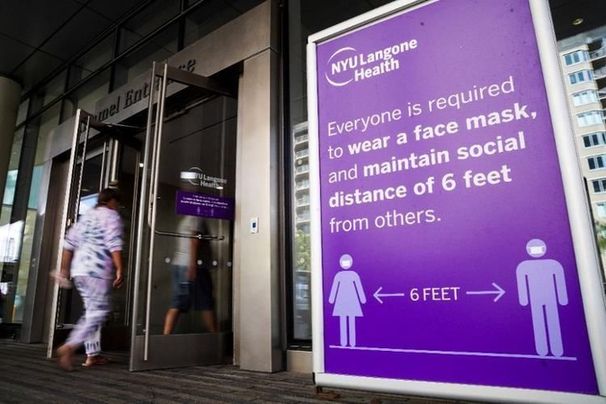 People walk past a warning board at a hospital in New York, United States, Sept. 6, 2021. The cumulative number of confirmed COVID-19 cases in the United States exceeded 40 million, according to statistics released by Johns Hopkins University on the same day. (Photo Source: Xinhua)

Political fragmentation is the root cause of America's failure to contain COVID-19. Partisan rivalries have intensified in the US, and the interests of political parties, especially those in election campaigns, openly override national and public interests, eclipsing basic human rights including people's life and health. If the two parties had been able to manage their political differences and work together to deal with the pandemic, or if the COVID-19 outbreak were not in an election year, the pandemic might not have gotten out of control in the US. However, lessons could be learned, but history cannot be postulated.

Political fragmentation has prevented the US from channeling national capacity into pandemic containment.American political scientist Francis Fukuyama wrote in Foreign Affairs in 2020 that the three elements of a successful response to the pandemic are national capacity, social trust, and leadership. The US is the world's most powerful country and a leader in medical technology and medical resources. Obviously, the main factor behind the runaway pandemic is not the lack of national capacity. Fukuyama argues that the US has great potential in terms of national capacity, but its current highly polarized society and incompetent politicians prevent it from functioning effectively.

Trump's sudden rise and "surprise" election victory in 2016 was in fact a product of the political polarization in the US. The Trump administration exploited and exacerbated political polarization. Former US Defense Secretary James Mattis criticized Trump as the first president ever who was not willing to unite the American people, "even not pretending to do so." However, the key to effective control of the pandemic lies precisely in solidarity and working together. Any weakness or loophole in any link of the whole society, or lax attitude or neglect, will cause national capacity to be impeded, depleted or misdirected in the process of pandemic prevention and control.

If leadership is the engine to mobilize national capacity, social trust is the driving bearing that ensures orderly operation. Due to political fragmentation, only some groups in American society have taken part in the pandemic prevention and control, while others have been turning a blind eye to the basic facts of the spread of the pandemic. According to a 2020 report by the Chicago Council on Global Affairs, 87% of Democratic respondents believed the pandemic is a serious challenge to the US, while only 48%t of Republican respondents believed so. In the face of the crisis, the US, a state machine that had no shortage of fuel, could only partially function. The precious opportunity that China gained for the world by effectively containing the pandemic at home was wasted, and Dr. Fauci and other experts’ warnings were ignored, and the lives and health of millions of Americans were trampled on.

Political fragmentation obstructs the normal operation of American politics and destroys its self-regulation mechanism. As partisan struggles intensified, the effectiveness of both horizontal and vertical division of power in American politics suffered performance decline. Members of Congress debated over pandemic bills to convey their interests, while the legislative and executive branches are hobbling each other. The lack of coordination between the federal and state governments worries people, while the state governments are at war with each other. The "confrontation" between democratic states and the Trump administration is frequently reported. The judicial system, which is supposed to function as a "stabilizer" in the chaos, has become a tool of partisanship. Since the outbreak, the Republican Party has challenged the state government's quarantine policies through lawsuits in several democratic states. Even when packaged as "protecting freedom" and "balancing economic interests," the real purpose of the lawsuits is to increase public exposure, gain electoral advantage, and thwart the political agenda of the opposing party.

At the end of March 2020, Mike Kelly, a Republican Congressman from Pennsylvania, tested positive for COVID-19. He was declared healthy more than a month later, claiming that "the recovery process was very difficult" and that he had "lost 30 pounds in about 10 days". People thought the infection of COVID-19 and the hard time of rehabilitation should increase his empathy for the ordinary people who are threatened by the pandemic. However, this experience not only failed to provoke any sense of support Senator Kelly had for pandemic prevention, but gave him the “confidence” to lead a lawsuit in his home state challenging the Democratic governor's quarantine policies and calling for reopening Pennsylvania.

US Congress squanders the public’s trust on partisan wrangling, but the virus does not stop spreading. The fact that Republicans are trying to block quarantine policies in Democratic states does not prove that Democrats are more sensible about the pandemic. Democrats have repeatedly attacked the Trump administration for not having a plan to fight the pandemic, but they are unlikely to come up with one that works. After African-American George Floyd was killed by a white police officer, protests, even riots, took place in many American cities. The Democrats took the opportunity to attack the Republicans for their ethnic policies, which also fueled the commotion and hindered pandemic prevention and control. The campaign timetable overrode two parties’ timetables for responding to the pandemic. 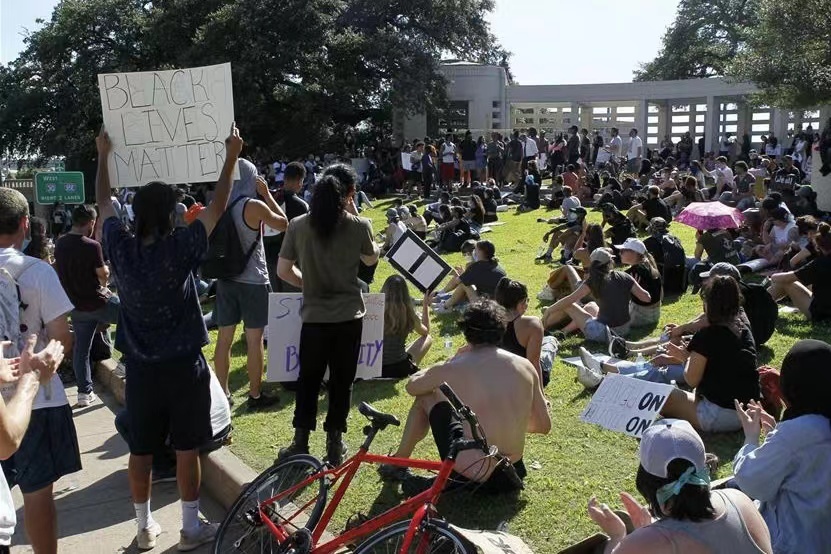 Political fragmentation has led American politicians to manipulate public opinion and confuse public perceptions. Political fragmentation and social polarization cause and affect each other and shape each other. Under the logic of election campaigns, if a party decides that the key to winning an election is not to unite the majority but to keep its loyal followers, using rational public standpoints to win public opinion becomes a thankless option. In his four years in office, Trump's overall poll rating had never flipped from negative to positive, but that didn't seem to bother him. Getting voters to go more extreme and say only what they wanted to hear is more bang for the buck. Therefore, during the pandemic, sensational and eye-catching statements were all the rage. From claiming "the virus will miraculously disappear one day" at the beginning of the pandemic to suggesting that "the virus will be killed by sterilizing water" when the pandemic was expanding, it’s unbelievable that these irresponsible remarks came from the president of the US, the world's leading power.

In the context of social polarization and with online we-media’s dividing effects on public opinion, it has been more difficult for the public to obtain objective and authoritative information on pandemic prevention. On October 2, 2020, President Trump tweeted that he had tested positive for COVID-19 and declared recovery after brief hospitalization. Mark Scaringi, a Pennsylvania lawyer, and staunch Republican advocate, immediately tweeted that Trump's quick recovery showed that for most Americans the outbreak was like a "mild flu" and that "political science and life science show that the US should be fully unlockdown". When Wolf, the Democratic governor, contracted COVID-19 on December 9, Scaringi took the opportunity to taunt him, saying it showed that the state's quarantine restrictions were meaningless and a "scam." The political divide runs like a watershed across American society, blinding people on both sides.

Political fragmentation has led the US government to stigmatize and blame China. Foreign policy begins at home. The two parties in the US are always "opposing for the sake of opposing", attacking and undermining each other, so they always find it difficult to cooperate on many domestic political agendas. As a result, the rulers in the US urgently need to create an "external common enemy" to divert domestic conflicts, ease the anxiety and maintain the increasingly divided interest groups.

From Trump hyping up "Chinese virus" and "claim for pandemic responsibility", to Biden advocating "laboratory leakage" and the so-called virus origins tracking, the logic behind is all old. Some people in the US seem unable to get things done without mentioning China, whether in public speeches at home or in talks with allies and partners abroad. Rather than continuing Trump’s strategic policy towards China, the Biden administration inherits an overall situation in which it has to get tough with China to advance its domestic political agenda. It is not a series of extreme measures taken at the end of the Trump administration that has shaped the future of US-China policy, but both parties are mired in political fragmentation. The US is trying to evade responsibility for the pandemic by blaming China, just like covering its ears and stealing the bell. If the US doesn’t remove the political virus, neither changing its president nor changing the ruling party will stop the pandemic from recurring. There is a bunch of urgent domestic problems in the US. Shortsighted efforts to push the political agenda with the "China issues" will only prevent the US from tackling the root causes of its social problems. To consolidate US hegemony through strategic competition with China is like drinking poison to quench thirst. The wheel of history is rolling forward and will not stop because some politicians are obsessed with the glory coming from “the victory in the Cold War”.

COVID-19 has killed nearly 700,000 people in the US so far, more than the death toll in the US Civil War. The cold numbers are sobering. Political fragmentation is the root cause of the US’ failure to contain the virus, and it was the root cause of the Civil War. Americans look up to President Lincoln because, in the midst of nationwide chaos, he recognized that political fragmentation was the gravest threat and managed to heal the rift and preserve the union. COVID-19 is the common enemy of humanity. The out-of-control pandemic in the US has not only inflicted severe trauma on its own people but also brought chaos to the global response to fight the virus. When will the US learn from the lessons of the pandemic that their domestic politics is torn apart? That is the most serious threat at hand. 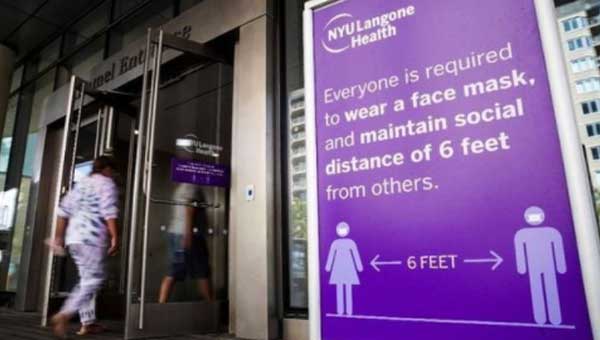