Review: China's 50 years since restoration of lawful seat in UN

The past five decades since New China restored its lawful seat in the United Nations have witnessed China’s peaceful development and its commitment and dedication to the welfare of all humanity. 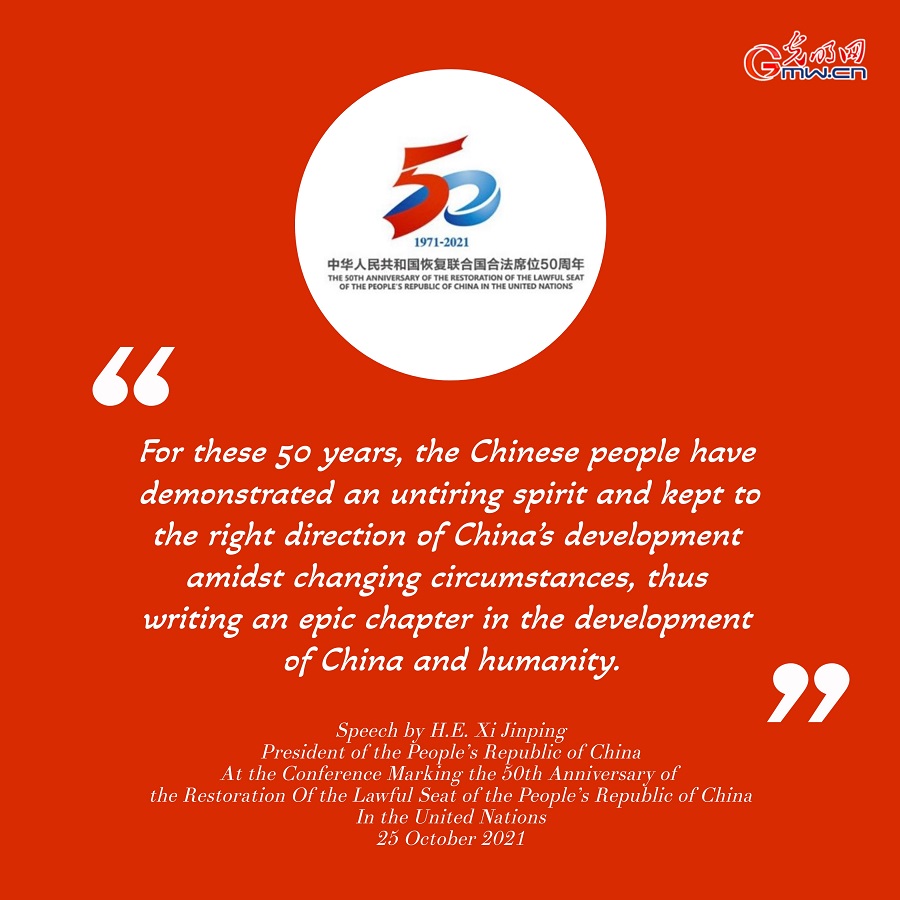 — For these 50 years, the Chinese people have demonstrated an untiring spirit and kept to the right direction of China’s development amidst changing circumstances, thus writing an epic chapter in the development of China and humanity. Building on achievements in national construction and development since the founding of New China, the Chinese people have started the new historical era of reform and opening-up, and successfully initiated and developed socialism with Chinese characteristics. We have continued to unleash and develop productivity and raise living standards, and achieved a historic breakthrough of leaping from a country with relatively low productivity to the second largest economy in the world. Through much hard work, the Chinese people have attained the goal of fully building a moderately prosperous society on the vast land of China, and won the battle against poverty, thus securing a historic success in eradicating absolute poverty. We have now embarked on a new journey toward fully building a modern socialist country and opened up bright prospects for the great rejuvenation of the Chinese nation. 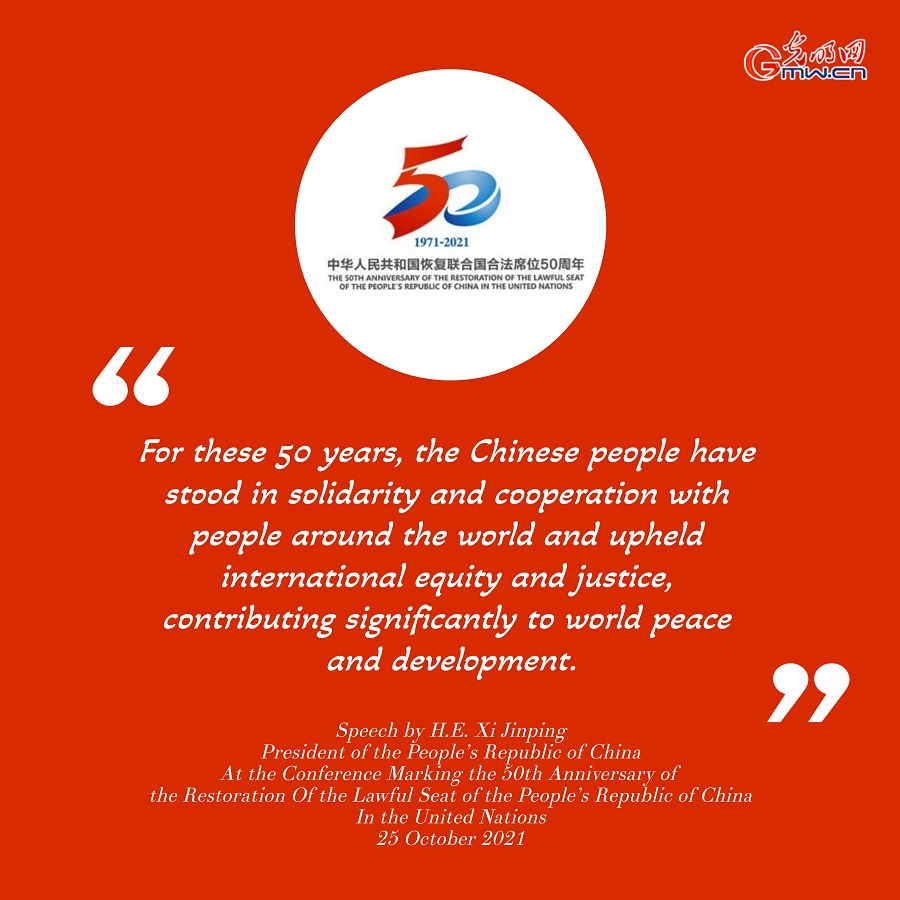 — For these 50 years, the Chinese people have stood in solidarity and cooperation with people around the world and upheld international equity and justice, contributing significantly to world peace and development. The Chinese people are peace-loving people and know well the value of peace and stability. We have unswervingly followed an independent foreign policy of peace, stood firm for fairness and justice, and resolutely opposed hegemony and power politics. The Chinese people are a strong supporter of other developing countries in their just struggle to safeguard sovereignty, security and development interests. The Chinese people are committed to achieving common development. From the Tazara Railway to the Belt and Road Initiative, we have done what we could to help other developing countries, and have offered the world new opportunities through our own development. During the trying times of the COVID-19 pandemic, China has been active in sharing COVID response experience with the world, and has sent large quantities of supplies, vaccines and medicines to other countries, and deeply engaged in science-based cooperation on COVID-19 origins tracing, all in a sincere and proactive effort to contribute to humanity’s final victory over the pandemic. 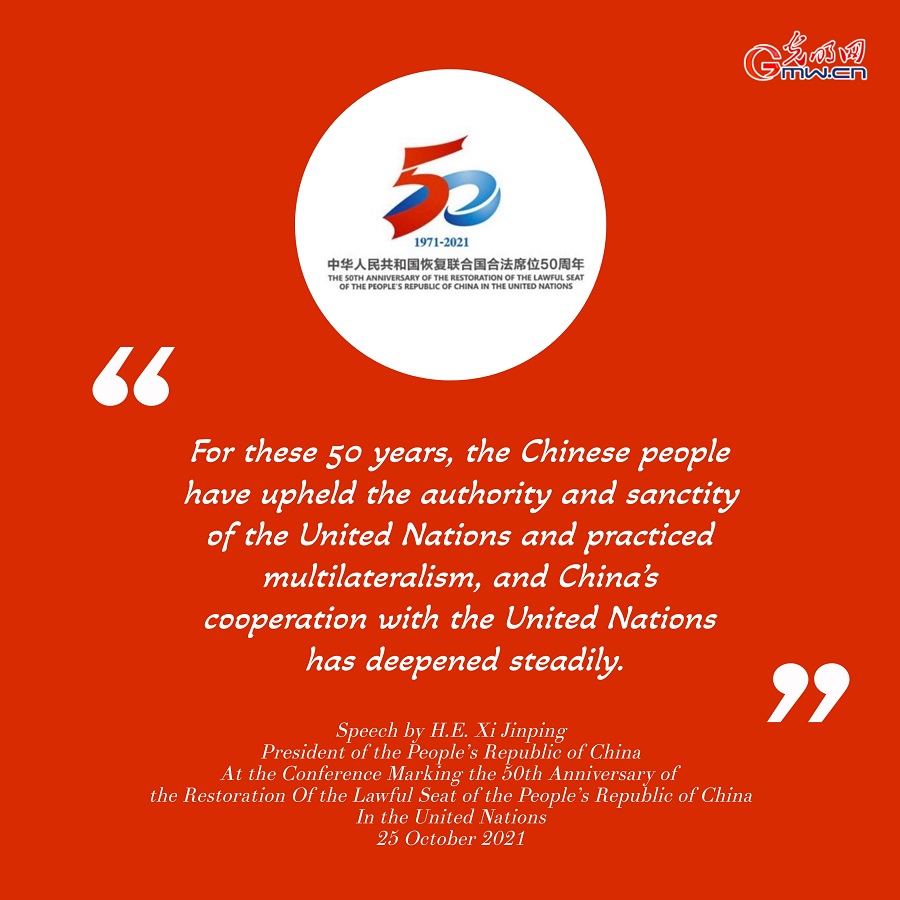 — For these 50 years, the Chinese people have upheld the authority and sanctity of the United Nations and practiced multilateralism, and China’s cooperation with the United Nations has deepened steadily. China has faithfully fulfilled its responsibility and mission as a permanent member of the UN Security Council, stayed true to the purposes and principles of the UN Charter, and upheld the central role of the United Nations in international affairs. China has stood actively for political settlement of disputes through peaceful means. It has sent over 50,000 peacekeepers to UN peacekeeping operations, and is now the second largest financial contributor to both the United Nations and UN peacekeeping operations. China has been among the first of countries to meet the UN Millennium Development Goals. It has taken the lead in implementing the 2030 Agenda for Sustainable Development, accounting for over 70 percent of global poverty reduction. China has acted by the spirit of the UN Charter and the Universal Declaration of Human Rights, and earnestly applied the universality of human rights in the Chinese context. It has blazed a path of human rights development that is consistent with the trend of the times and carries distinct Chinese features, thus making major contribution to human rights progress in China and the international human rights cause.