BEIJING, Nov.9, (Guangming Online) This year marks 20 years since China joined the WTO. During these two decades, China has not only actively integrated into the world, but also contributed to the development of the world economy through a series of initiatives.

Chinese President Xi Jinping, at the opening ceremony of the fourth China International Import Expo, noted that this year marks the 20th anniversary of China’s accession to the World Trade Organization (WTO). Over the last two decades, China has fully delivered on its accession commitments. Its overall tariff rate has been cut from 15.3 percent to 7.4 percent, lower than the 9.8 percent accession commitment. The central government has reviewed and revised over 2,300 pieces of laws and regulations, and local governments over 190,000 pieces, which all helped to unleash market and social vitality.”

“Over the last 20 years, China’s economic size has grown from the 6th to the 2nd largest in the world, trade in goods from the 6th to the 1st, and trade in services from the 11th to the 2nd. China has led developing countries in utilized foreign investment, and its outbound direct investment (ODI) has risen from the 26th to the 1st. The past 20 years have witnessed a China deepening reform and pursuing all-round opening up, a China seizing opportunities and rising to challenges, and a China stepping up to its responsibilities and benefiting the whole world,” Xi said. 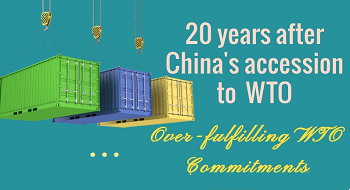