New promises and fulfilled commitments for China’s wider opening up

The 4th China International Import Expo (CIIE), the world’s largest import fair, was organized in Shanghai from Nov 5 to 10, attracting approximately 3,000 offline exhibitors from 127 countries and regions around the world.

Proposed by Chinese President Xi Jinping, the CIIE is designed to be a key platform for international procurement, investment promotion, and cultural exchange.

Notably, the event, started at a special point that coincides with the 40th anniversary of reform and opening-up, represents a significant decision of China to pursue a new round of high-level opening-up, and its major initiative to widen market access for the rest of the world.

"Opening-up is the hallmark of contemporary China," said Xi at the opening ceremony.

The past 40-odds years have witnessed comprehensive advancement of China’s economy benefiting from opening-up. Meanwhile, the effective integration of China’s domestic market with overseas markets has promoted the flow and allocation of various elements worldwide, which sustained economic vitality for both China and the world.

As Xi noted, China’s opening wider to the world has generated a new wave of domestic development while injecting fresh impetus into the world economy. The hallmark represents more than China’s huge progress driven by the policy, but the nation’s contributions to world development.

Since the first CIIE, China has been pledging measures for higher-level opening-up at each expo. And information about their fulfillment would be shared in the next for public review.

Xi announced at this year’s CIIE that measures proposed at the previous one for further opening-up have mostly been implemented. Despite the impacts of COVID-19 and other major changes both unseen in a century, China has achieved innovative growth in foreign trade and made important contributions to keeping global industrial and supply chains stable and boosting world economic recovery. 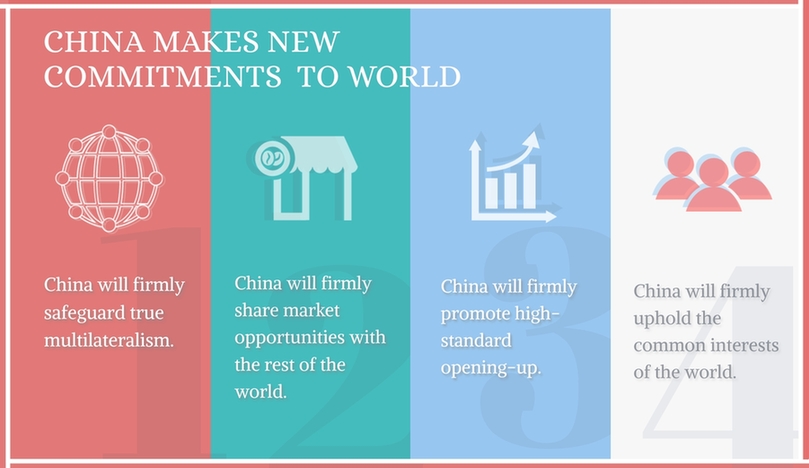 In the face of rising unilateralism and protectionism that distupt economic globalization, Xi made new pledges to reaffirm China’s commitment to further open its market and help boost global cooperation.

China will firmly safeguard true multilateralism, share market opportunities with the rest of the world, promote high-standard opening-up and uphold the common interests of the world, he vowed.

The new promises came with three unchanged resolves to develop in line with the trend of the new era.

The year of 2021 also marked the 20th anniversary of China’s accession to the World Trade Organization(WTO).

“China has fully delivered on its accession commitments,” Xi said.

China’s overall tariff rate has been reduced to 7.4 percent from 15.3 percent, lower than the 9.8 percent accession commitment. The central government has reviewed and revised over 2,300 pieces of laws and regulations, and local governments over 190,000 pieces. The WTO accession protocol and relevant working group reports stipulated that 100 sub-sectors in nine categories need to be opened in 2007. Now, China has actually opened nearly 120 sub-sectors, exceeding its commitments.

The concrete actions have brought about fruitful achievements.

The huge progress is also the result of much hard work and great tenacity of the Chinese people under the strong leadership of the Communist Party of China (CPC), the result of China’s proactive steps to strengthen international cooperation and pursue win-win cooperation.

With its conclusion drawing near, this year’s CIIE has won praises from the world, believed as conducive to more opportunities and boosting world economic recovery.

The event has become a great platform for businesses around the world, a demonstration of China's efforts for high-standard opening-up, and another commitment of China to benefit more countries and peoples with its own development. 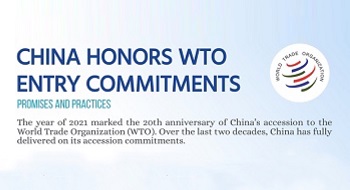