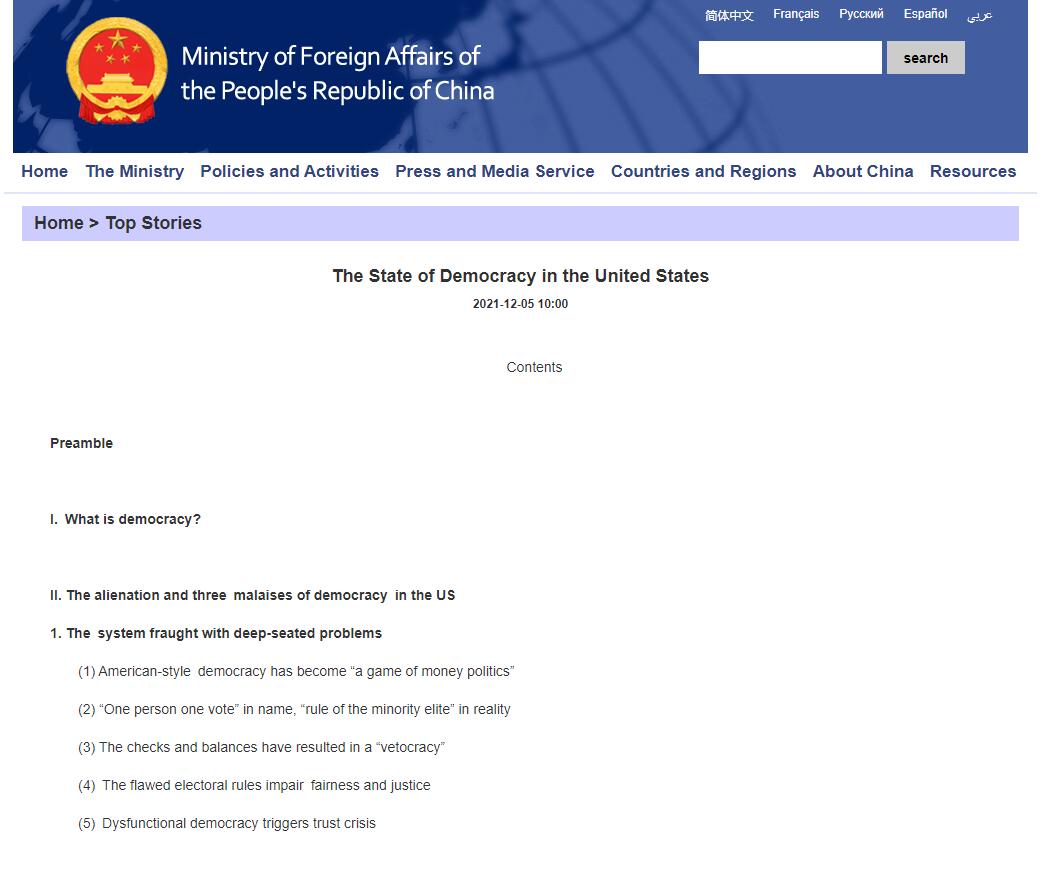 BEIJING, Dec. 5 (Xinhua) -- China's Ministry of Foreign Affairs on Sunday released a report on its website titled "The State of Democracy in the United States."

In addition to the preamble and conclusion, the report has two parts titled "What is democracy?" and "The alienation and three malaises of democracy in the U.S."

Democracy is a common value shared by all humanity. It is a right for all nations, not a prerogative reserved to a few, the report said, adding that democracy takes different forms, and there is no one-size-fits-all model.

It went on to say that it would be totally undemocratic to measure the diverse political systems in the world with a single yardstick or examine different political civilizations from a single perspective.

The political system of a country should be independently decided by its own people, the report said.

It said that from a historical perspective, the development of democracy in the United States was a step forward. The political party system, the representative system, one person one vote, and the separation of powers negated and reformed the feudal autocracy in Europe.

However, over the years, democracy in the United States has become alienated and degenerated, and it has increasingly deviated from the essence of democracy and its original design, said the report.

The report elaborated on the alienation and the malaises of democracy in the United States from three aspects: the system fraught with deep-seated problems, messy and chaotic practices of democracy, and disastrous consequences of the U.S. export of its brand of democracy.

The report said what is now imperative for the United States is to get to work in real earnest to ensure its people's democratic rights and improve its system of democracy instead of placing too much emphasis on procedural or formal democracy at the expense of substantive democracy and its outcome.

What is also imperative for the United States is to undertake more international responsibilities and provide more public goods to the world instead of always seeking to impose its own brand of democracy on others, use its own values as means to divide the world into different camps, or carry out intervention, subversion and invasion in other countries under the pretext of promoting democracy, it added.

The international community is now faced with pressing challenges of a global scale, from the COVID-19 pandemic, economic slowdown to the climate change crisis, said the report, calling on all countries to rise above differences in systems, reject the mentality of zero-sum game, and pursue genuine multilateralism.

All countries need to uphold peace, development, equity, justice, democracy and freedom, which are common values of humanity, the report said.

It is also important that all countries respect each other, work to expand common ground while shelving differences, promote cooperation for mutual benefit, and jointly build a community with a shared future for mankind, the report said. Enditem