Washington should clean up democratic mess rather than staging democracy show

-- Washington's "show of democracy" takes place at a time when the illusion created by the American democratic system has been repeatedly shattered in recent years.

-- Rather than addressing its own challenges in establishing a healthy democracy, U.S. politicians are preoccupied with weaponizing democracy to smear other countries.

-- Despite the hoopla surrounding the so-called "Summit for Democracy," the international community has long concluded that American democracy exists only in form and not in substance.

BEIJING, Dec. 9 (Xinhua) -- Democracy is a right of all people and should never be patented by any country. As the international community watches in dismay the so-called "Summit for Democracy" led by the United States, more rational voices around the world have warned against Washington's attempt to pit one camp against another driven by a dangerous Cold War mentality.

Ironically, Washington's "show of democracy" also takes place at a time when the illusion created by the American democratic system has been repeatedly shattered in recent years.

Rather than addressing its own challenges in establishing a healthy democracy, U.S. politicians are preoccupied with weaponizing democracy to smear other countries.

Experts around the world have warned that by handpicking specific summit participants based on its own geopolitical considerations and assumptions about democratic standards without regard for other world democracies, Washington is actually further polarizing and dividing nations.

The summit is anything but democratic as genuine democracy fundamentally favors inclusiveness, diversity, equal opportunities and prosperity of people rather than compelling other nations to adopt the Western model of democracy that primarily revolves around economic interests, Shakeel Ahmad Ramay, chief executive officer of Asian Institute of Eco-civilization Research and Development, told Xinhua.

"This is going to further divide the world in different blocs at a time when countries around the globe direly need unity and cooperation for global development," the expert said, stressing that the so-called "Summit for Democracy" is nothing but a tool to maintain U.S. hegemony under the guise of democracy.

In his column article for The Manila Times, Austin Ong, researcher of Manila-based think tank Integrated Development Studies Institute, said that by initiating the so-called "Summit for Democracy," the United States is making a mockery of democracy.

"It polarizes the world rather than harmonizes (it). Instead of creating more avenues for peaceful reintegration of relationships among nations, it intensifies divisions," Ong said.

Despite the hoopla surrounding the so-called "Summit for Democracy," the international community has long concluded that American democracy exists only in form and not in substance.

As is widely recognized that the ultimate litmus test for good democracy is whether it can truly represent and serve the fundamental interests of the people, the American way is far from being the "envy of the world."

Primarily, the American-style democracy is not democratic. Many of America's founding fathers were slave owners themselves. And almost a century after its founding, the United States still acquiesced in slavery, and forbade women or African Americans from voting.

Today, the American democracy is more of a plutocracy, with a government hardly of, by or for the people. As U.S. political scientist Francis Fukuyama wrote early this year, the government in Washington is "captured by powerful elite groups that distort policy to their own benefit and undermine the legitimacy of the regime as a whole."

"The people do not govern. Politicians respond almost exclusively to the desires of special interests and the wealthiest citizens," lamented Charles Wheelan, a senior lecturer at the Rockefeller Center at U.S. Dartmouth College.

A recent study by the Robert Bosch Foundation in Germany found that over half of Americans think the democratic system is not functioning at all under the current circumstances. Also alarmingly, a recent poll by U.S. broadcaster NPR shows that 81 percent of U.S. adults said the future of U.S. democracy is under threat.

FORCED DEMOCRACY CAN NOT FUNCTION

For a democracy to be viable and resilient, it also needs to draw its strength from a country's own culture and history, as well as its economic and social realities. This is a major reason why more than 20 years of nation-building in Afghanistan crashed to the ground in a matter of weeks. A copied American-style democracy did not have the local conditions to sustain it.

Lisandra Astiasaran Arias, counsellor of the permanent mission of Cuba to the UN Office at Geneva, argues that there is no simple model or definition of democracy, and every state has the right and the responsibility to develop its own models in accordance with its particular situation and the will of its own people.

"We should not allow the attempts of some countries to impose their views on democracy and human rights on the rest of the world," she said.

In their interviews with Xinhua, many experts said that China's impressive development, including its achievements in poverty reduction, has illustrated the characteristics of an advanced democracy.

"It is the whole process of people's democracy. This is really an advanced democracy in a Chinese way. It may not fit other countries, but it is helping China," he added.

Belachew stressed that China's people-centered approach has always put its people's interests at the forefront, which is key to China's development.

"Chinese democracy focuses on the wellbeing of the people," Belachew said. 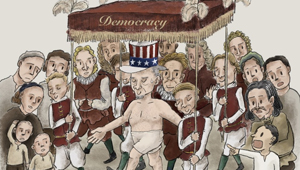