Hypocrisy of US democracy: A game of money politics

The report indicated that money politics has penetrated the entire process of election, legislation and administration. Only people with enough capital can enjoy their democratic rights provided by the Constitution. According to statistics, winners of 91% of US Congressional elections are the candidates with greater financial support. Big companies, a small group of rich people, and interest groups are generous with their support and have become the main source of electoral funding. And those so-called representatives of the people, once elected, often serve the interests of their financial backers. They speak for vested interests rather than the ordinary people.

During the 2018 midterm elections, the huge political donations, mostly coming from the top 0.01% ultra-rich of the American population, accounted for over 40% of campaign finance. Money politics and lobby groups are restricting channels for ordinary Americans to speak out, whose voices expressing genuine concerns are overshadowed by a handful of interest groups. The oligarchs would enrich themselves with the power they have got while totally ignoring the interests of ordinary Americans. 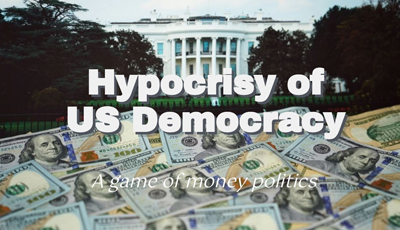