Hypocrisy of US democracy: A case of the emperor's new clothes

Racial tension, mishandling of the pandemic, social division...in the US, the most successful political idea of the 20th century has gone wrong.

It's not only reflected in its system design and general structure, but also in the way it is put into practice.

With the best health and medical resources in the world as it claims, the US, with the highest numbers of infections and deaths, has been a total mess when it comes to COVID response. The root cause of the continued spread of the coronavirus in the US is not a dearth of science, but the refusal to trust and rely on science.

The pandemic, which could conceivably have brought a country together, has instead contributed to the growing political divides in the US. Some politicians prioritized partisan interests rather than safeguarding the health of the American people. The federal and state governments have failed to galvanize a concerted response to the pandemic, and are mired in infighting instead. As a result, pandemic response measures have been severely politicized and then weakened.

On 13 January alone, 4,170 Americans died of COVID-19, far exceeding the death toll of the 9/11 terrorist attacks. One in every 500 Americans have died of COVID-19. Up to now, COVID-19 deaths in the US have surpassed its total death toll from the 1919 Influenza Pandemic, and its combined deaths in World War I, World War II, the Korean War, the Vietnam War, the Iraq War and the war in Afghanistan.

If the US had taken a science-based response, a lot more lives could have been saved. The pandemic, as epidemiologist and former head of the US Centers for Disease Control and Prevention William Foege put it, is a “slaughter”.

American society has experienced relapses of its malaise of racial discrimination from time to time.

The bullying of Americans of Asian descent has also been increasing since the outbreak of the pandemic. Statistics from the US Federal Bureau of Investigation indicate that hate crimes against people of Asian descent rose by 76% in the US in 2020.

Democracy is not an adornment or publicity stunt; rather, it is meant to be used to solve problems faced by the people.

The US is more polarized than any other Western country in terms of wealth distribution. The boasts of the economic myth ring hollow to most Americans, for whom today's wages are barely enough to meet their basic needs.

A report by UC Berkeley economist Emmanuel Saez shows that in terms of average annual income, America’s top 10% rich earn over nine times as much as the bottom 90%; the wealthiest 1% are about 40 times more than the bottom 90%; and the ultra-wealthy top 0.1% are 196 times of the bottom 90%.

The wealth polarization in the US is inherent to its own political system and the interests of the capital that its government represents. Though the American people have never stopped condemning the widening wealth gap, those governing the US choose to do nothing about the growing wealth inequality.

And the pandemic has further exposed a rule in American society — capital first and the rich first.

The US is not a straight A student when it comes to democracy, still less a role model for democracy. The American-style democracy can hardly uphold public order and ethics, nor advance public well-being to the fullest. 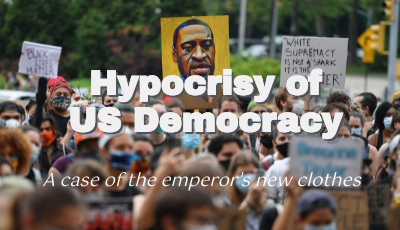