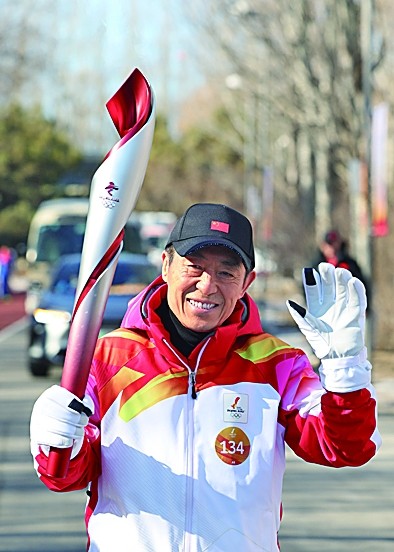 On the night of February 4, the last surprise of the opening ceremony of the 2022 Beijing Winter Olympics was revealed, showing the audience what General Director Zhang Yimou has described as “an unprecedented torch lighting in the Olympic history”. The ceremony witnessed an unseen innovation in how the Olympic Flame was lighted as the traditional burning fire was replaced by “small flames”, conveying the message of a Greener Olympics with low carbon dioxide emission.

How the cauldron is lighted has always been the biggest suspense and the greatest highlight of an Olympic opening ceremony. For this design, Zhang Yimou and his team not only showed their creativity, but also infused a sense of humor: pieces of the cauldron had already appeared early in the ceremony, but no one had recognized its real face until the very end. Placards of all delegations formed a giant snowflake hanging at the center of the Bird Nest. Bordered by loopy, calligraphic olive branches, the “snowflake” was sparkling and eye-catching.

Not until the last moment did we realize that the cauldron of the Beijing Winter Olympics had completely subverted the image of its predecessors. The large “snowflake” itself was the cauldron and the whole process of torch lighting emphasized the idea of low carbon to the greatest extent.

The two innovations — the cauldron and the way it was lighted — have shown the world cultural confidence of Chinese people in the new era. In this way, Zhang and his team tell the world a Chinese story, a story of a shared future for mankind.

Before the ceremony, Zhang said: “Cauldron in the past Olympics only showed their own cultural features and design, but this year we have put names of all the countries and committees on the torch, a union of snowflakes from around the world.” He explained that the idea of “snowflake” was hinted at as early as the countdown, when representatives wearing costumes with patterns of ice and snow entered the stadium, holding in their hands a “snowflake”. Each “snowflake” represented a country or a committee and snowflakes from around the world came to Beijing, forming a giant sparkling snowflake. The big snowflake was the unique cauldron of this year, with the names of all participating nations and committees on it.

Whether the “flame lighting underwater” of the 2000 Sydney Olympics or the “flying man” of the 2008 Beijing Olympics, what was used for the traditional cauldron in the previous opening ceremonies was the burning of fire. “Each minute the fire burns, it consumes tons of fuel. Indeed, the burning of fire is a symbol of the Olympic spirit, but I have been wondering whether it is not eco-friendly if we keep the fire burning throughout the Winter Olympics and the Paralympic Winter Games, which would last for over a month. This time, the last torch in the relay would not need to light anything, for the torch itself constitutes the cauldron. Therefore, we only need to keep the ‘small flame’ burning in the coming month—a symbol of low carbon dioxide emission.” Zhang said, “It would be a classic moment in the Olympic history.”

He added, “The Olympic flame burst into life at an official ceremony in Olympia, arrived in China after a long journey, and was passed all the way to the Bird’s Nest. It keeps burning during the whole journey, which is a symbol of the Olympic spirit that has been passed on vigorously for a hundred years. This year, the last torch in the relay becomes the cauldron It would be put on the torch set and would not need to light anything.”

According to Zhang’s team, they used the oxyhydrogen combustion technology in designing the torch. Compared with propane, hydrogen is more ecological, but it is easier to explode and to leak. Therefore, if it is not under strict control, the effect of the torch would be impacted negatively. That explains why hydrogen has never been used as the fuel for the torch in the past Olympic Games. This year, thanks to the efforts of scientists from different fields and the innovative idea of Zhang’s team, a stable flame powered by hydrogen is created. Chromogenic reagent attached to the flame has contributed to the beautiful visual effect of warmth and vigor.

They added, “We have looked into torch designs of previous Winter Olympics of the past century and learned from others’ sparkling ideas. The fuel for the Olympic torch has turned from magnesium to propane, and finally to today’s hydrogen with zero emission. It shows our pursuit for a greener Olympic and China’s technological strength. It would also facilitate China’s development of hydrogen-related technology in the future. Compared with the traditional way of burning fire, this year’s Olympic Flame would save 99.9% of the energy.”