One World, One Family—Beijing 2022 Opening Ceremony

On February 4, 2022, the fourth day of the Chinese Lunar New Year, it was still chilly in Beijing, but spring was approaching, and everything was coming back to life. At 8 p.m., on the big screen of the National Stadium (also known as “the Bird’s Nest”), a countdown of the Chinese “Twenty-four Solar Terms” was being played. The terms were accompanied by the imagery of changing seasons and picturesque landscapes, showing how the Chinese have observed and lived with nature and the world since ancient times. 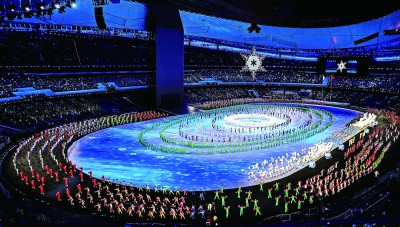 At this moment, everyone was looking forward to the future.

When the countdown came to the last ten counts, the audience started shouting in unison, with fireworks bursting out matching numbers above the Bird’s Nest.

“Three, two, one …” As the countdown finished, the stadium exploded into cheers, and the night sky turned bright in dazzling fireworks.

On the big screen in the stadium, a child blew on a dandelion, sending its white seeds into the air, which then became fireworks in the sky, representing the seeds of spring being scattered all over the earth.

As children carrying supple green stalks danced on the ice, imitating the swaying of a dandelion, everyone felt the vitality of spring. Fireworks then wrote the word “spring” across the sky above the National Stadium, lighting up everyone’s face.

Tonight, the national flag of the People’s Republic of China was raised after being passed in the hands of representatives of 56 ethnic groups from all walks of life. Tonight, the athletes from 91 participating countries and regions gathered in Beijing to welcome the light of the sun collected in front of the Temple of Hera in Greece.

At this moment, with the whole world watching, Beijing officially became the first city in history to host both a Summer and a Winter Olympics.

A drop of ice-blue ink fell from the sky, transformed into the water of the Yellow River, and then came pouring down. The churning waves finally condensed into a crystal world of ice and snow. A giant ice cube emerged from the floor, where 24 laser beams engraved the names of the 23 previous Olympic Winter Games hosts before projecting the name of Beijing 2022.

As six ice hockey players hit a virtual puck against the ice cube, the cube slowly broke and melted, revealing crystals in the shape of the five Olympic Rings. This “breaking of the ice” signifies the removal of barriers and the promotion of understanding encouraged by the Olympic spirit.

A Snowflake with Dreams

The entrance of athletes from all over the world into the Bird’s Nest coincides with the Beginning of Spring, which means they could celebrate the arrival of a new spring together. A “Guest-Greeting Pine” made by fireworks appeared in the sky over the Bird’s Nest. It had a graceful and peculiar posture, with branches on one side stretched out like open arms to welcome guests from afar. The Chinese people were expressing their welcome to the guests from all over the world in their own way. The pine also embodied a peace-loving philosophy that showed throughout the opening ceremony, a notion that has been respected by the Chinese people since ancient times.

The "Gate of China" decorated with ice carvings slowly opened, and a guide wearing a blue and white tiger hat took the lead, holding a snowflake-shaped placard in the design of the Chinese Knot, on which the words "Greece 希腊" were written.

A march-in ceremony featuring snow got started. The delegation of Greece, the founding nation of the Olympics, first entered the stadium, and other delegations followed in the order of the number of strokes in the initial character of their Chinese name. The pacesetters on the sidelines danced cheerfully. The masks they wore were printed with "Welcome" in both Chinese and English, sending special greetings to all participants in the context of the global pandemic.

The 2022 Beijing Winter Olympic Games has opened its doors, extending respect and courtesy to athletes from all participating countries (regions). The countries of Saudi Arabia and Haiti participated in the Winter Olympics for the first time, and American Samoa returned to the Winter Olympics after 28 years. Their appearances are meaningful moments that demonstrate the Olympic spirit and will be recorded in the history of the Olympic Games. As IOC President Bach said: "In today's world, especially in times of the pandemic, only by working together can we solve the problems we are facing."

For many athletes, the Beijing 2022 is a journey to realize their dreams. In the march-in ceremony, some one-person delegations have drawn special attention. “It’s always been my dream to come to the Olympics since I was very small.” Sarah Escobar, the flag bearer and the only athlete of the Ecuadorian delegation, said with great excitement. "Thank you, China, for making my dream come true!"

When the Chinese delegation finally entered the stadium, a household melody in China called "Singing the Motherland" was played, and the audience cheered with exuberance. Gao Tingyu and Zhao Dan, the flag-bearers of the Chinese delegation, held the flag together. The Chinese athletes marched with confidence and waved to the audience from time to time. In Beijing 2022, the Chinese delegation would, for the first time in history, take part in ALL of the 7 major events and 15 sub-events. A total of 177 athletes would participate, setting a record high. With the average age of about 25 years old, they are young and full of vitality. They had set the goal of achieving the best results in the history of China competing in the Winter Olympics, and now they were ready to fight for it.

Under the witness of the Olympic Rings, the small snowflakes with the name of each delegation on the big screen of the stadium gathered. A large snowflake slowly rose from the center of the stage. This big snowflake was formed by interlocking the snowflake-shaped placards of all participating countries (regions), and was framed by calligraphic “olive branches”, which symbolize all people living in peace and harmony. The Olympic Games is a place where countless people's dreams come true. It is also a big family where people spend time together, get to know each other better, and share their hardships as well as their joys.

At this moment, the Olympic motto "Faster, Higher, Stronger—Together" was “painted” in brilliant colors on the floor of the National Stadium. Six legendary Chinese winter sports athletes marched into the Stadium guarding the Olympic flag. Wherever they walked, Chinese Knots, which symbolize unity and auspiciousness, appeared with their steps and swayed gracefully.

At this moment, the bright red Chinese National Flag and the Olympic Flag fluttered high in the National Stadium.

At this moment, on the splendid stage of the Olympic Games, a wonderful performance of global exchange and integration was on.

One World, One Family

“We rejoice together. We endure together. We have the same expectations. We suffer the same storms and wind. We pursue the same goals. We cherish the same love.” Accompanied by the song “Let the world be filled with love”, 76 young people from all over the world stood shoulder to shoulder in a line and started walking forward in the same direction. They were showing themselves in this simple way and paying tribute to the ordinary people around the world. Where these young people walked, a long river of images showed. It was a river full of memories and dreams, depicting the lives of people from all over the world. There were pictures of people working together to fight the pandemic, and also of athletes from all over the world fighting for their dreams. As these young people moved forward, the Chinese Knots on both sides gradually faded, and finally turned into the words "Together for a shared future".

With everyone watching, the two young torchbearers held the torch together, walked towards the big snowflake bearing the names of all delegations, and inserted the torch in its center. The big snowflake slowly lifted into the sky. In the sound of music, fireworks illuminated the sky, and the world celebrated the Olympic Games together. For the first time in the history of the Olympic Games, a “small Olympic flame” has been lit, reflecting China’s commitment to a greener world.

"One world, One family." This is the moment for people all over the world to break down barriers, abandon their prejudices, and work "together for a shared future" in the brilliance of the Olympic Rings. The stage had been set for the world's best winter sports athletes, where they would continue the Olympic legends with their own stories in the next 16 days.