Egg painting art was originated in China during the Warring States period and developed during the Tang Dynasty and flourished in the Qing Dynasty. In 2009, when egg painting was included as an intangible cultural heritage in Xicheng District, Zhao Wei was awarded the honorary title of“Beijing Folk Arts and Crafts Master”.

While practicing traditional techniques, Zhao has explored and enriched the expression of eggshell art, forming her unique artistic styles. Zhao’s colored eggs are unique in three aspects: firstly, she initiated the skill to cut a whole egg evenly into two, one half represents the sky, and the other half is earth. They always appear together, meaning good things come in pairs. Secondly, Mrs. Zhao could carve on the surface of both halves of the eggshells. Thirdly, she can do embroidery on the eggshells, and the most incredible technique is embroidery with human hairs.

Zhao’s works of New Year paintings and eggshell paintings are loved both at home and abroad. She has represented China in cultural exchange activities in more than 30 countries and many of her works have been collected by dignitaries and international institutions.

In August 2009, at the invitation of the Chinese Mission to the EU, Zhao Wei participated in the China Culture Festival held in Rotterdam, the Netherlands, and the "Charm Of Beijing" exhibition held in the EU Headquarters, the European Parliament building and the Cultural Center of Luxembourg. Her work named Jinling 12 Flowers was collected by the Rotterdam city government, and other eggshell paintings were collected by the Chinese Ambassador to Belgium, the Chinese Ambassador to Luxembourg, and the P of the European Parliament. The picture shows zhao Wei handing Crescenzio RIVELLINI, the then European Parliament Delegation for relations with China, her eggshell painting named "Jubilant".(Photo provided by Zhao Wei)

In the 2022 Smart Lady Live Broadcast Series: Beijing’s Smart Lady - Love for the Winter Olympics livestreamed on March 3rd, 2022, Zhao Wei shared with us her experience about the Beijing Winter Olympics, and unveiled the inside story of her career. 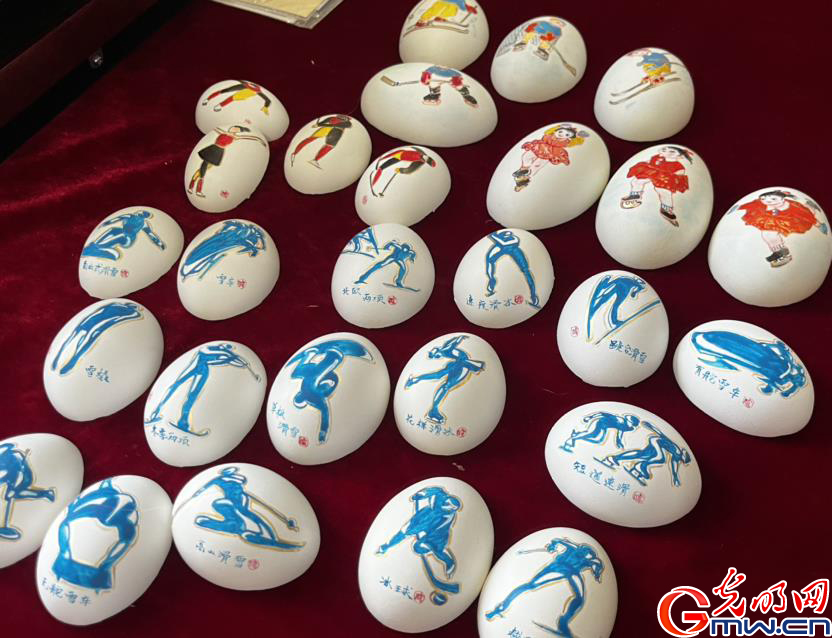 Zhao Wei's series of colored egg which have the painting of the icons of the Winter Olympics competetion events on them. (Photo by Zhang Andi/Guangming Photo)

Zhao brought egg paintings and New Year paintings to the Great Hall of the People on the Winter Olympics Temple Fair. All the VIPs passed through her and her works before meeting with President Xi and having the banquet at the Golden Hall. In the program, she showed us the colored eggs she brought to the Fair, which themed “Peaceful Bamboo”, “Abundance of the Year”, “Fortunate Piled up” and “Five Blessings Knocking the Door”, as well as the traditional Yangliuqing New Year paintings she painted. The Yangliuqing paintings originated in the Ming Dynasty. They look joyful and auspicious, and oftentimes feature touching subjects. 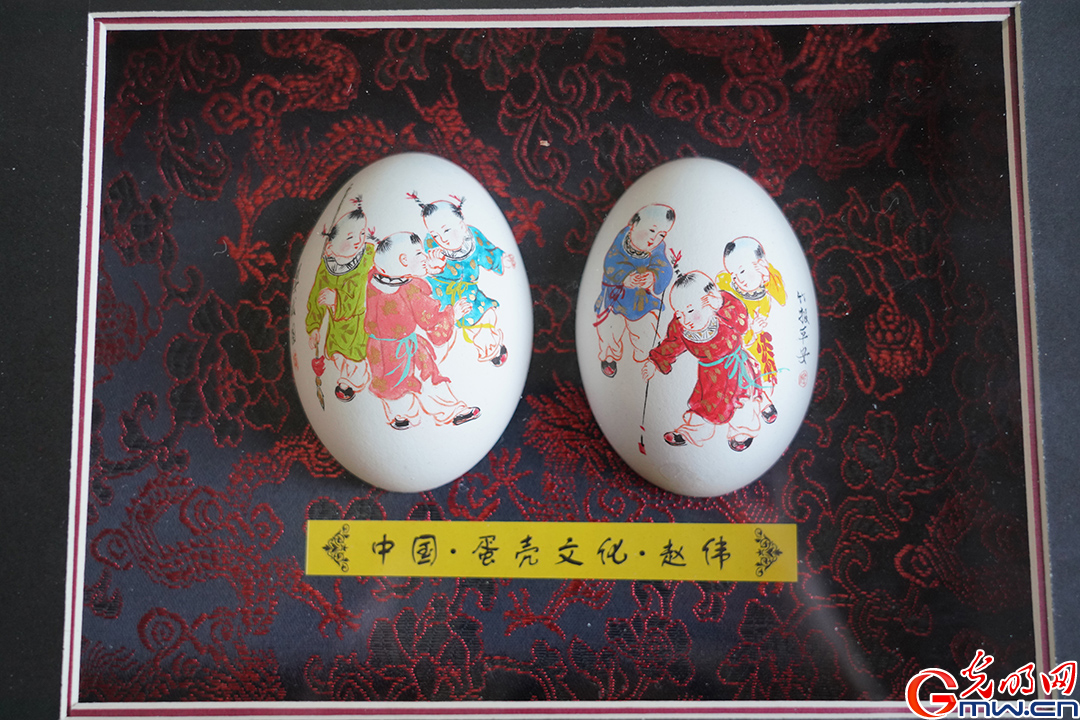 Mrs. Zhao said, The VIPs were very interested in every piece of her works on display. She remembered IOC President Bach came straight to her booth and pointed to the Chinese seal and clay and asked what are they and how to use them. After Zhao demonstrated the use of the Chinese seal, President Bach stamped a“Bing Dwen Dwen” on the blank part of a bookmark himself, and was beyond happy when he learned he could take the stamped bookmark with him. 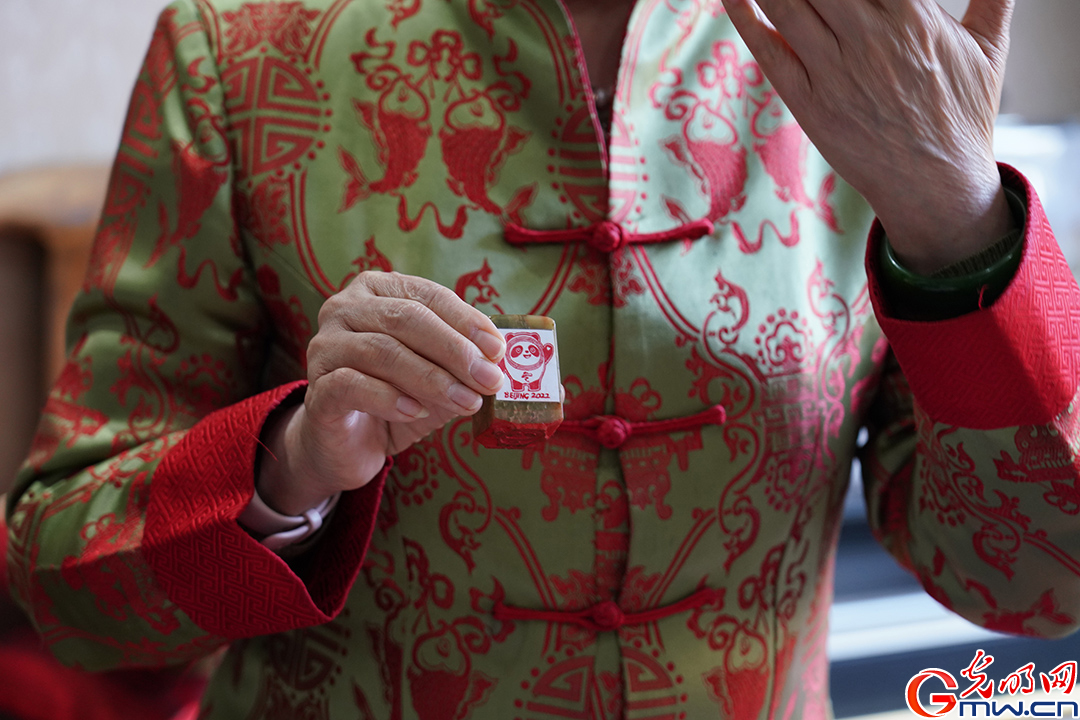 When we interviewed Zhao Wei in her studio in a quiet and peaceful community in Xicheng District, her husband watched politely as we talked, and took photos for Zhao from time to time. Zhao said, her career cannot succeed without the support of her family.

When Mrs. Zhao was tasked to draw 35 paintings as gifts for VIPs and 65 paintings for the accompanying officials within only one week, she had to work at the studio from 8:00 am to 8:30 pm. Worrying she might skip meals or just make do, Mrs. Zhao’s husband tried his best to cook different meals and send them to her studio every day. 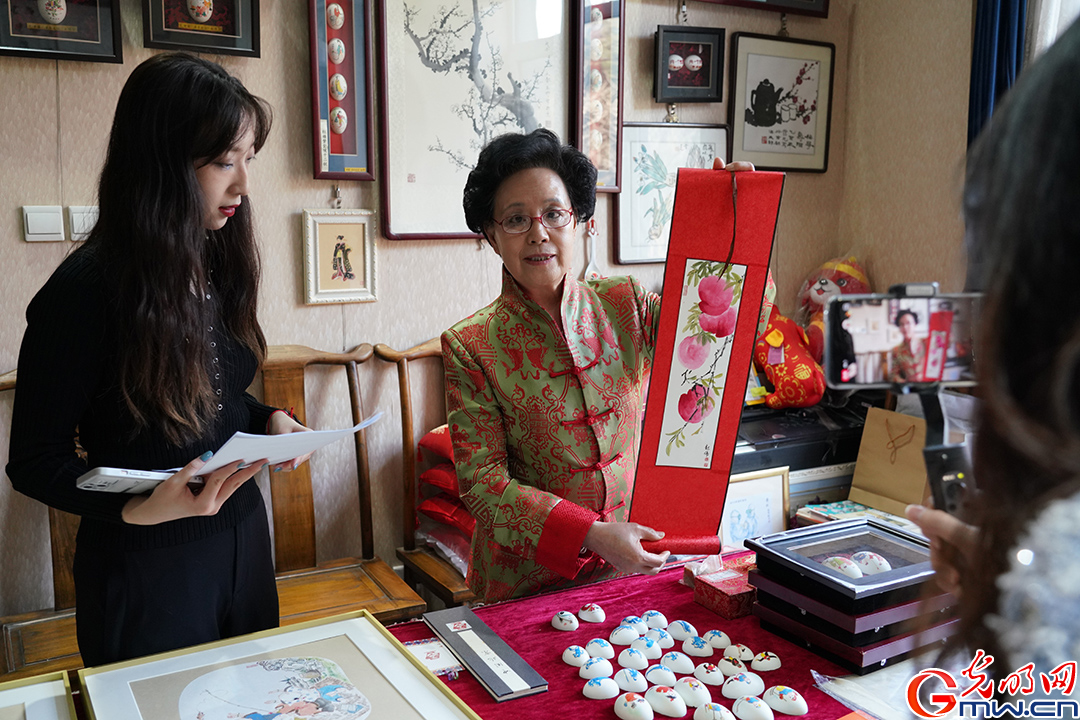 Zhao Wei shows the gift she prepared for the winter Olympics VIPs in the live broadcast. (Photo by Wang Ruoxin/Guangming Photo)

Zhao told us, one of the students of hers was from Tangshan City in Hebei Province, and he’d stay a full day when he came for study. His parent ordered him takeaway food in the beginning but Zhao’s husband insisted on cooking big meals and bringing the food to the studio every noon. The other night he fell ill and went to the doctor. It was already 4 a.m. when he came home, yet he still cooked for this student, knowing he had a class with Zhao the next day. The student’s parents were both touched to tears when hearing the story.

Zhao Wei said her biggest hope is that Winter Olympics VIPs can not only feel the hospitality of Chinese people but also bring the traditional Chinese wishes of health and good luck back home.