A tale of two Americas: a look into wealth inequality in the US

When thinking of American personalities who are famous for their lifestyles, Paris Hilton, Kim Kardashian, and Dan Bilzerian come to mind. Their lavish ways of living are shared by the socialites and the poker player themselves and captured on camera, making a ubiquitous presence.

Imagine being rich enough to design a two-story mansion for your puppies, hire a 24-hour security guard for your half-a-million-dollar engagement ring, build a personal nightclub right at home, and own over 1,000 pairs of shoes. Or, wear a full set of diamond grills just for fun, pay magazines to Photoshop paparazzi pictures for nearly six digits annually, rent a private island for your birthday and get there in a private jet, and live in a $60 million mansion. And how about hosting parties for hundreds of people in your rented mansion that costs $200,000 a month?

However, is the privilege of financial freedom shared by the majority of the American population, or is it exclusive to only a small fraction of people? Underneath the rich appearance, strikingly different living circumstances emerge. Imagine an insecure childhood in a neighborhood surrounded by drug use and gunshots. Or a teenage life drifting from one homeless shelter to another and ending up living on the streets, searching for a new place to sleep each night. When you grow up, you have to survive on a $20-per-month food stamp, and even donate plasma twice a week to cover the bills. 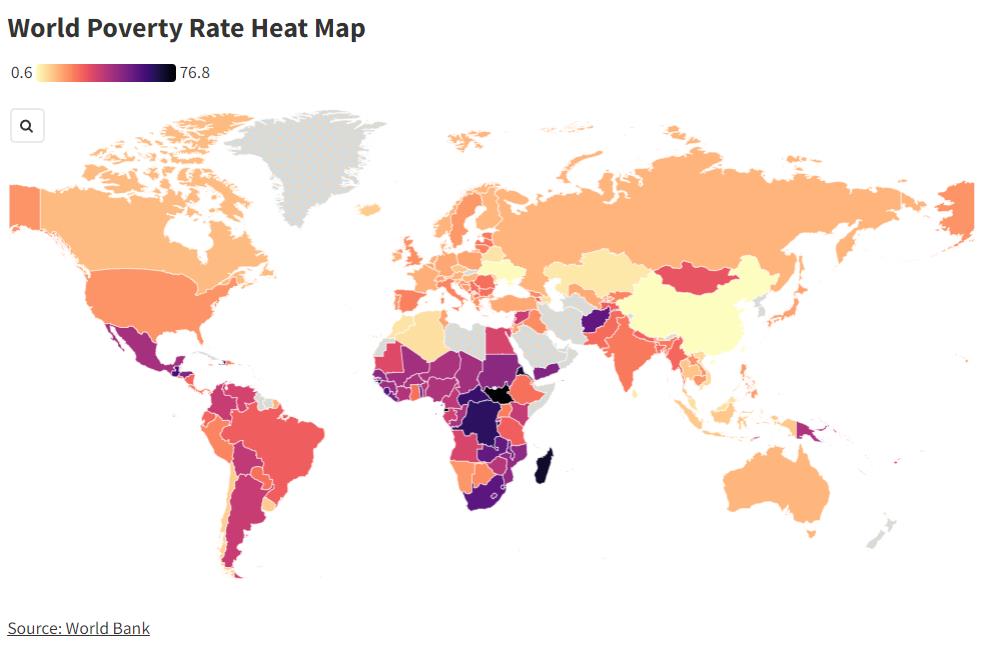 And these are not rare cases of extreme poverty. As of 2020, 37,247,000 people are living in poverty in the US, making up 11.4% of the American population. In addition, approximately 1.5 million families, totaling 4.2 million people are living on only $2 a day.

Poverty rates vary among different racial groups, with African Americans having the highest poverty rate of 19.5%, and Hispanics having the second highest of 17%.

The juxtaposition of the astonishingly rich and the inconceivably poor is the reality of today’s America. Between the two ends of the spectrum, though, which is the real America? To answer this question, we need to look into the distribution of wealth in America.

When grouping families by income, the highest quintile holds more than 50% of the aggregate income.

The figures look more extreme when we look at wealth or net worth in the US. The bottom 50% of families share only 2.5% of the nation’s total wealth. Of this group, some 13.4 million families (about 1 in 10) have negative net worth, meaning that a large part of the population is ill-equipped to cope with the income crisis caused by the COVID-19 pandemic. Above the bottom group, the next 40% of families hold 27.9% of the total wealth, leaving 69.6% in the hands of the top 10% of families. What is more bizarre is that, within the top 10%, the distribution of wealth is also quite uneven, where the top 1% possesses 32.1% of the total wealth, which is more than all the wealth held by the bottom 90%.

Essentially, if the total net worth of the US is represented by 2,000 gold coins that gets distributed to 100 people, the poorest 50 people will get 1 coin each on average, and the next 40 people will get 14 coins each. Among the richest 10 people, 9 will get 83 coins each, and the richest person will pocket 642 coins alone. This is not some horrific social structure portrayed in a dystopian novel, but the reality of present-day America. What’s worse is distribution inequality continues to deepen.

Another measurement that leads to the same conclusion is the GINI Index. Comparing US’s GINI Index over the years with other G7 countries, it is clear that no other developed country has more severe wealth inequality than the US. 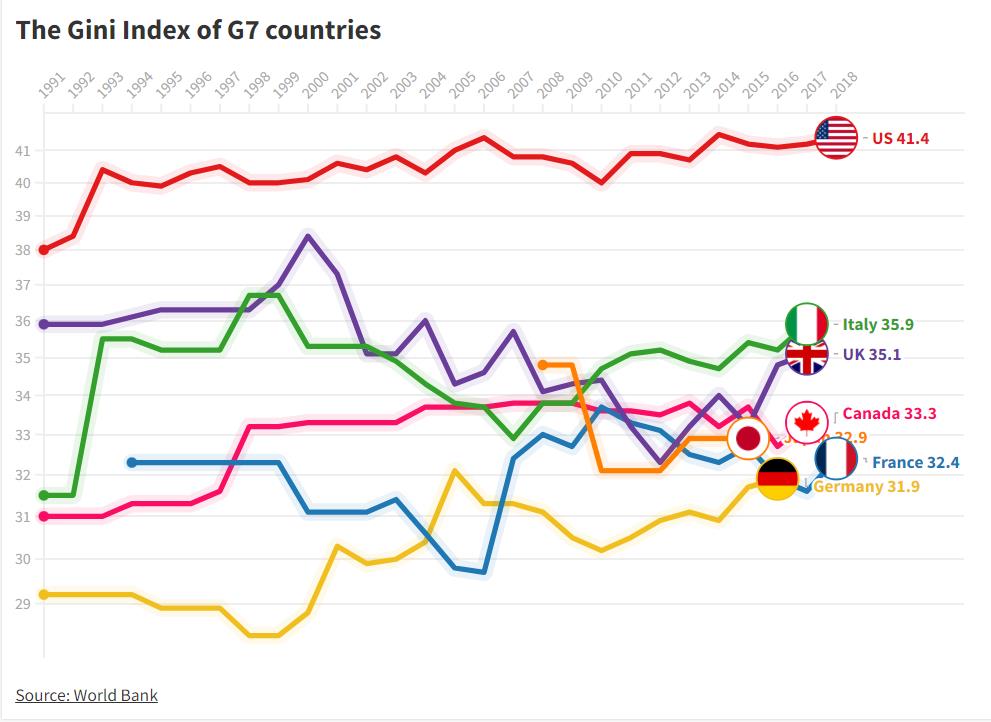 The State, corporations, media companies, advertisers, and other components of American society often celebrate the lives of Hollywood celebrities, business tycoons, sports stars, and Ivy League elites, and craft consumerism into a societal norm and an embodiment of success. However, with deepening inequalities in wealth, income, educational resources, social welfare, and even media coverage, the fantasy of the American dream is simply out of reach for most Americans. 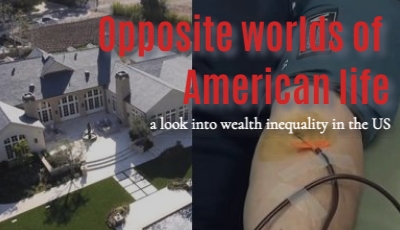