Jail or hell: growing concerns over US private prisons

The privatization of prisons, including immigration detention centers and related services, has largely gone unnoticed until recently, as corruption, violence and human rights violation scandals constantly emerge, adding stains to the US government’s commitment to the rule of law.

Calls have been heard from both within the US and across the international community to correct the current criminal justice system in the US. More and more questions have been raised regarding transparency of the industry. There even are voices for ending the private for-profit prisons in the country.

Here is a brief timeline of the development of America’s private prison industry that may tell the whole story.

Many organizations have been established in advocation of reforming the criminal justice system, such as Abolish Private Prisons (since 2015), Sentencing Project (since 1986), Penal Reform International (since 1989), and the Innocence Project (since 1992).

These organizations use legal disputes, impact litigation and advocacy as well as educational events to raise public awareness of problems with the criminal justice system and push state and federal governments toward reforms.

Actions like “Support the COVID-19 Safer Detention Act" and the "First Step Implementation Act”, “Sign up to get involved in wrong convictions”, “The private prison abolition movement”, and numerous others are ongoing.

Special Rapporteurs and independent experts have been appointed by the Geneva-based UN Human Rights Council in recent years to examine and report back on US correctional facilities.

A group of UN independent human rights experts on Feb. 4, 2021 urged the US government to end the outsourcing of all detention centers, including those holding migrants and asylum seekers, after the US announced the decision to stop using privately-run federal prisons.

“Given the magnitude of mass incarceration in the US, this decision will benefit only the very small percentage of federal prisoners who are held in private prisons, and specifically excludes vulnerable people held in migrant and asylum centers who are at particular risk of serious human rights violations”, said Jelena Aparac, Chair-Rapporteur of the Working Group on the use of mercenaries.

In a statement released on Jan. 10, 2022, the experts called on the US to close the Guantánamo Bay detention facility, and declared that two decades of “practicing arbitrary detention without trial accompanied by torture or ill treatment is simply unacceptable for any government, particularly a government which has a stated claim to protecting human rights”.

Concerns of the media

Research and journal articles concerning the shocking inhumane incidents in US private prisons have appeared in mainstream media since around 2016, including The New York Times, The Washington Post, The Guardian, etc., while plenty still remain uncommitted.

American Prison: A Reporter’s Undercover Journey into the Business of Punishment by Shane Bauter, an American journalist, was published in 2018, revealing how private prisons became entrenched in the southern part of the country as a systemic effort to keep labor force in place in the aftermath of slavery, and how the echoes of these shameful origins linger.

The National Public Radio described the book as “an enraging, necessary look at the private prison system, and a convincing clarion call for prison reform.” 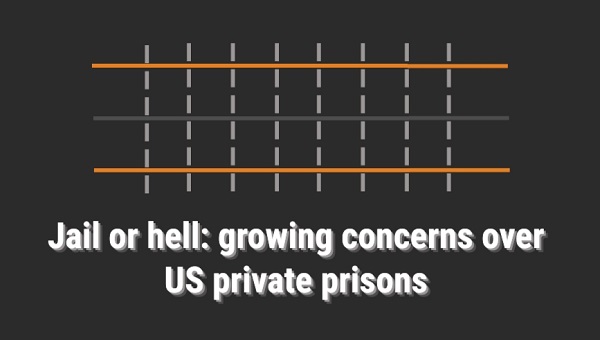