New Normalcy with COVID in US: the Masks, People and Pain Left Behind

Just as the mild spring blankets the land with fresh greenery, US Centers for Disease Control and Prevention (CDC) has painted the vast majority of its national map in green, signaling an inviting state of new normalcy to allow nearly all Americans to drop masks in public.

The new CDC metrics, announced in late February, shifted the major measurement of COVID risks from case rate to hospital capacity. Along with new cases, counties will be labeled red when new COVID hospital admissions reach 20 per 100,000, or when more than 10% of staffed inpatient beds are occupied by COVID-19 patients in the past week. The lookup tool indicates that more than 98% of the US population have been assessed to live in low- or medium-risk communities.

According to the guideline of the CDC, mask-wearing is only requested in counties marked as high-risk, while throughout most parts of the country, precautions, especially mask-orders for the healthy have been downgraded to mere recommendations.

In real-life situations, states have already charted their own path into the new phase before the CDC renewed its guidance. Mask mandates, which are always a huge source of controversy, have been abandoned given half a chance. Shown in the illustrations below, several states have taken a break from layered precautions as early as late 2021. When the requirement on face-covering in Hawaii expired at 11:59 p.m. on March 25, every US state and territory saw an end to mask mandates in most indoor settings.

In the push to drive things back to normal, concerns lingered over the being of new normalcy, potential risks confronting the vulnerable and the harm to the collective psyche.

"Return to normalcy" was initially used by Warren G. Harding in the 1920 presidential election to evoke a return of life before World War I and the deadly 1919 Influenza Pandemic.

The phrase was reintroduced on the same occasion 100 years later when US President Joe Biden campaigned to restore the nation buffeted by the COVID-19 pandemic.

On March 2 this year, the White House unveiled the National COVID-19 Preparedness Plan to grant most of the Americans the pre-pandemic normal lifestyles.

"It's time for America to stop letting the coronavirus dictate how we live," US President Joe Biden declared in his remarks.

In contrast to the presidents' firm steps toward new normalcy, there's a universal doubt among health experts whether the next phase has arrived.

Screenshot shows the report jointly contributed by two dozen scientists, doctors and public health experts, which charts a path for the transition out of the COVID-19 pandemic.

"The next normal must look and feel a lot like the old normal," wrote a report jointly contributed by two dozen scientists, doctors and public health experts in early March. The report described the state of normalcy as where people "can feel confident enough to work, attend school, shop ... without the imposition of emergency measures or restrictions" such as masking, distancing and periodic lockdowns.

When it comes to the right timing, the report said that restrictive measures can end only when disease burdens from COVID decline to those of influenza. Influenza has been a scourge for centuries yet causes severe crisis in the US, the report further explained.

Practically, new normalcy in numbers should strive for average mortality of "less than 0.5 deaths per one million Americans per day, or 165 deaths per day", according to the report.

Dr. Jeremy Samuel Faust, instructor of Harvard Medical School and emergency medicine physician of Brigham and Women's Hospital co-authored an article to draw comparisons between seasonal influenza and COVID mortality. 752.4, the "mean number of counted deaths during the peak week of influenza seasons from the past 7 influenza seasons (2013-20201)" was proposed by Dr. Faust as a more precise threshold.

The US is now averaging 644 deaths a day, according to the data reported to the CDC. The number suggests that the COVID-19 mortality during the seven days ending March 31 was nearly 7-fold greater than the one of bad influenza seasons.

"Unfortunately, the United States has yet to arrive at the next normal," said the report roadmapping a new normal without major disruptions of the virus, "COVID is still causing an intolerable level of death that's far higher than other viruses such as the flu."

Vaccination stands out to be the dominant measure against COVID when the new normal has emerged. Mask-wearing is then assumed to be unnecessary for most parts of America.

Masks, however, are seen as the final protection for those who can't be shielded properly by vaccines.

Kids are taking the brunt of COVID due to their limited ability to take restrictive measures. The nation's 18 million kids under five remain the only group not yet eligible for vaccination. Kids under 2 are too young to wear masks due to risks of suffocation, not to mention that those under one are not able to take most of the precautions.

Rates of vaccination lag among the racially minoritized groups and people with lower incomes, leaving them more vulnerable to COVID in the absence of masks.

Masks also play an important role for people with suppressed immune system. A March 2021 study found 56% of the immunocompromised individuals weren't able to build efficient levels of protection against the virus even after a booster shot. Being immunocompromised means the body fails to produce antibodies to prevent infections. The number of the group accounts for at least 7 million in the US.

Moreover, these are the people who would be at greater risks of severe complications and even death once catch the COVID, which creates a double whammy.

For them, the blue fabric square is the only way out.

It's worth noting that masking up is to protect the wearers, as well as the people around by creating two-sided barriers against respiratory droplets. Large-scale lifting of mask mandates notwithstanding, public health experts are still calling for consistent mask-wearing.

"I personally will continue to wear a mask in most indoor public settings," Gerald Harmon, president of the American Medical Association, said in a statement, "I urge all Americans to consider doing the same, especially in places like pharmacies, grocery stores, on public transportation -- locations all of us, regardless of vaccination status or risk factors, must visit regularly."

It's of vital importance to cater to the safety and needs of the vulnerable, since how much water which a bucket can hold depends on the shortest piece of wood rather than the longest one, as the Barrel theory stated. The status of the vulnerable will be a key indicator of how future variants will affect the US.

Right now, the vulnerable feel forgotten and left behind. Madison Shaw, a girl who’s immunocompromised, said when interviewed by NBC News, "Those (mask mandates) being lifted kind of brings you back to a place pre-vaccine, almost that same level of safety, which is extremely limiting in allowing me to meet my basic needs. I'm talking about going to the grocery store, doing remote work in cafes, trying to enter the job market or even an office space."

"The rest of the world has moved on, and they (the kids) are not able to do so safely," Jennifer Shu, a pediatrician and spokeswoman for the American Academy of Pediatrics was cited by a February 21 article by the Washington Post.

NO TIME FOR THE GRIEF OVER LOSS

Psychological trauma is also holding back the transition to a new normalcy. 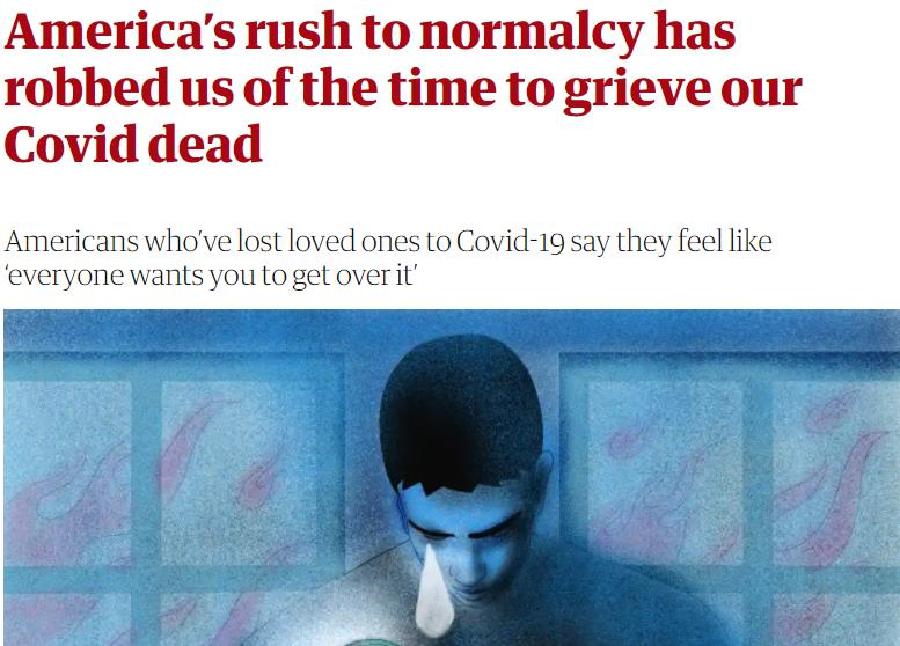 Screenshot shows the Mar. 13 article titled "America's rush to normalcy has robbed us of the time to grieve our Covid dead" published by The Guardian.

"This rush to reinstate a sense of normalcy may have inadvertently robbed us of the time we need to process many layers of trauma," wrote an opinion piece in The Guardian on March 13.

"The immense cumulative toll on the public's psyche has felt impossible for many to escape," it said.

The urge to return to normal social activities both physically and mentally can "interrupt mourning process", which can complicate and increase people's distress, according to a study on psychosocial effects of the Ebola outbreak.

The article pointed out that the whole countries’ COVID narrative has changed to help enter the post-COVID era. Mild symptoms of many Omicron cases prompt governments and experts to treat COVID-19 like flu, which was called "the flu-ization of COVID". And it is the "flu-like" virus that has caused a total death nearing 1 million, and over 79 million infection cases so far.

Things can be complicated behind the rush to lift mask mandates and return to a new normalcy.

It's about COVID-fatigue, desire to reopen economy and even a tug of war between political parties.

But at the core lies the classic American struggle between public interest and personal liberty. Through the lens of American independence trait, requirements on consistent precautions in other countries are always characterized as "harm to civil rights" and "infringement of individual freedom".

Make no mistake, COVID-19 is the common enemy of all human beings. It's about the battle for ourselves, for our family, for the vulnerable and for all.

1. The article named "Assessment of Deaths From COVID-19 and From Seasonal Influenza" articulated the incorrect comparisons between deaths from COVDI-19 and seasonal influenza and indicated a much overrated influenza deaths number. "The CDC, like many similar disease control agencies around the world, presents seasonal influenza morbidity and mortality not as raw counts but as calculated estimates based on submitted International Classification of Diseases codes." "On average, the CDC estimates of deaths attributed to influenza were nearly 6 times greater than its reported counted numbers."