Mr. Siddharth Chatterjee, UN Resident Coordinator in China, was interviewed by the Belt and Road Ambassador Interview Program, where he shared his views on many topics related to China and the UN. 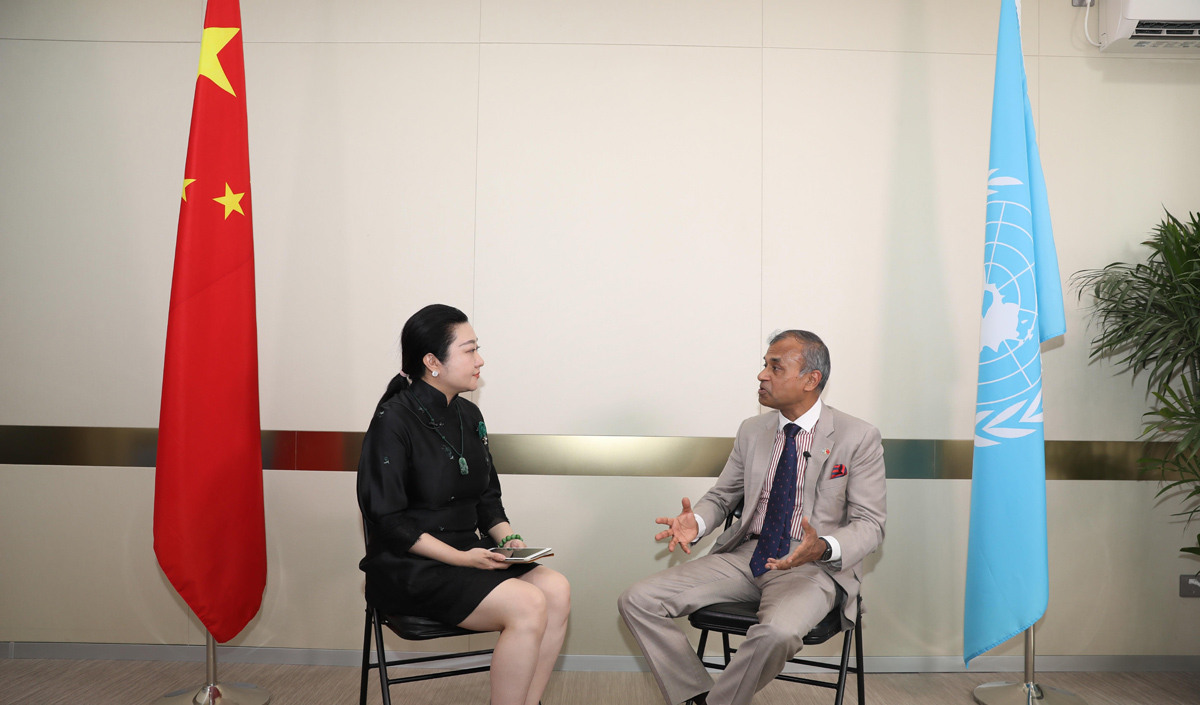 The topics being discussed include Mr. Chatterjee’s impressions of China, his views on China’s success combating the COVID-19 pandemic and eradicating absolute poverty, common visions between China and the UN, and the goals Mr. Chatterjee hope to achieve as UN Resident Coordinator in China. 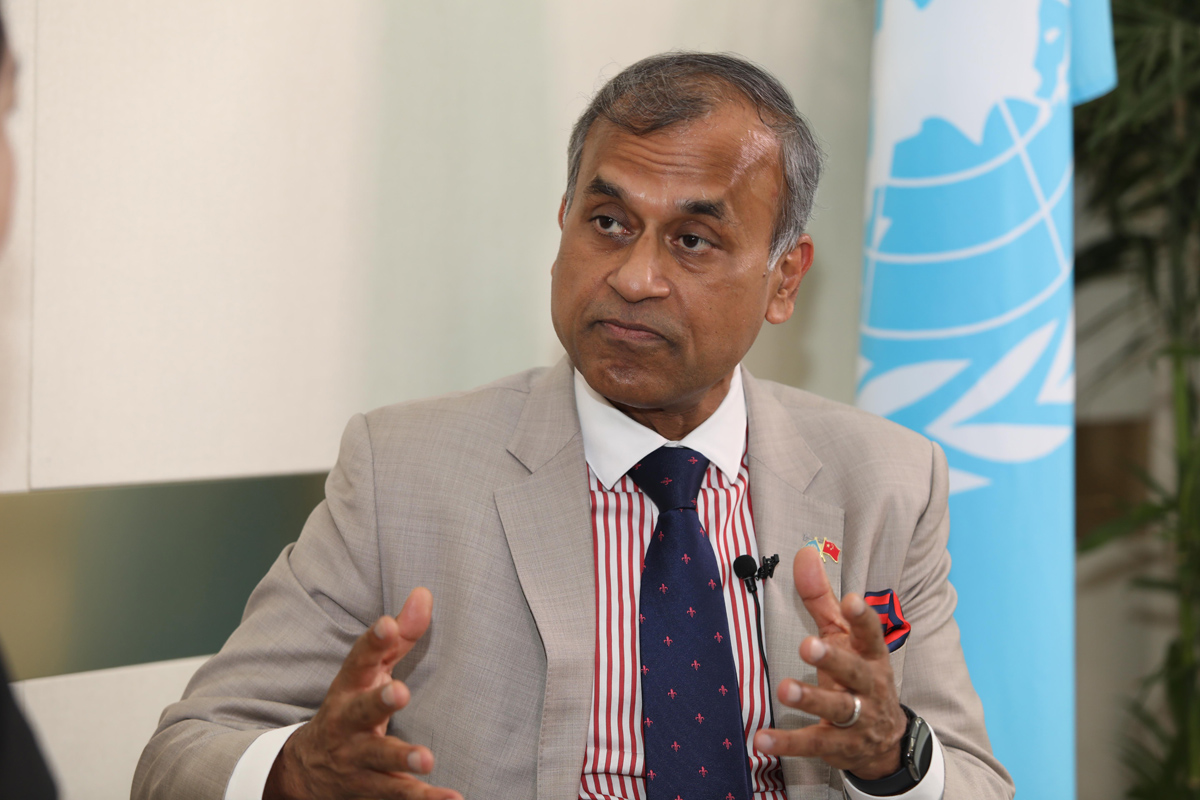 Here are the views Mr. Chatterjee shared during this conversation.

China goes beyond expectations. I'm just struck by the remarkable progress that the country has made, given the fact that just 40, 41, 42 years ago, it had a per capita GDP of a mere 180 dollars, and today, it's crossing 12,000 dollars. So the meteoric rise and making this sort of progress is striking. And I think it's an important lesson for many other parts of the developing world.

I'll start at the outset by really congratulating China in the way it launched a public health response to flatten the curve of the COVID pandemic. And I think that since 2020 to date, the fact that they have such few cases is example of the exemplary leadership. It really brings together very strong political will to make sure that the virus does not spread. The second, is they've had the right public policies in place to keep the COVID-19 under control and end it. And lastly, is partnerships. The partnership that the UN enjoys with the National Health Commission, with different partners in government, all aspects of government working together. So I think China actually presents a textbook example of how to defeat a pandemic. And I think this is perhaps something that the rest of the world can absolutely learn from. And I say this without equivocation, China's response to COVID has been simply spectacular.

Importance of multilateralism in today's world

Poverty in all its form is perhaps the biggest threat to our humanity. And the overall effect that it has in the evolution of nation states is perhaps one of the biggest challenges that we face. What China did, it's quite remarkable, that in a matter of 40 years not only did it lift nearly 800 million people out of poverty, but in the last seven years, nearly a hundred million people out of absolute poverty. When you lift people out of poverty, you give them dignity, you give them hope, you give them opportunity. It includes better access to education, to better health, to better skills. All these contribute towards nation building. So the progress China had made would not have happened had China not invested in human capital. And that is why the UN, we as the UN family are very proud that we established our first presence in China in 1979 and have been in this journey with China ever since.

So three things: number one, I congratulate China for having managed to get so many people out of poverty. Number two, we have to maintain this trajectory of making sure that people do not just fall back into poverty but to safeguard the environment to be able to advance human development. And thirdly, how do we share China's best practices with other parts of the developing world, in particularly Africa, where I have spent a lot of my career.

The purpose of the United Nations is to build global consensus, is to walk away from that period of conflicts and wars. And I think the fact that since 1945 we've not had a major world war is significant of the fact that there is still consensus going. We may have differences of opinion, there are different areas of geopolitics with challenges. Ultimately, it is the maturity and wisdom of nations and a country like China where President Xi Jinping is a loud and constant advocate on the principles of multilateralism, about a united approach to dealing with the world's problems. The fact that he set an agenda where we need to achieve carbon peaking by 2030, and carbon neutrality by 2060, it is about the preservation of our humanity. So I think China's role in this is extremely important.

To me the first priority is to make sure that we implement the UN China Sustainable Development Cooperation framework, which has started in January 2021. It has three overarching strategic priorities. First, is people in prosperity, which aligns with the 14th Five-Year Plan, which aligns with the vision that China has over the next 50 years to make China and keep China prosperous and keep moving it up the trajectory of progress, which is about people and prosperity. The second, is the planet and this responds precisely to President Xi's call on dealing with this climate emergency that we are confronted with. I'm completely committed to make sure that vision, that envision that President Xi has, the whole UN family is united in supporting China's efforts, not just in China of safeguarding the environment, but work with China to safeguard the environment everywhere else. And the third is a very important one, which is about partnerships. It is a united effort to advance human development, it is a united effort to advance humanity. It is a united effort to achieve the Sustainable Development Goals (SDGs) which is just nine years away. And by 2030, we should be able to look back proudly as the UN and China to say not only did we achieve all the SDGs in China, but how did we work together to achieve the SDGs in the rest of the world.

Advice for young people who want to work for the UN

The ambition should be, it is not about working in some headquarter, it is to be wanting, and the desire to go into some of the most difficult places. That's how I started my career, going to some of the most difficult places in Bosnia, and in Somalia, and in South Sudan, and in Darfur, and in Iraq. But to go to these difficult places because that is where you can actually feel the impact of your work. That is where you understand the real tragedy people confront and how do we find ways of collaborating to end those tragedies.

So my message to all the young people is, if you have to build castles in the air, go ahead and do so, but make sure that you put a foundation underneath it. And that foundation is knowledge, skills, education. But above all that, bringing in a principle of philanthropy, and most importantly, compassion. 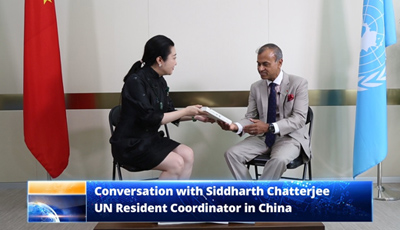