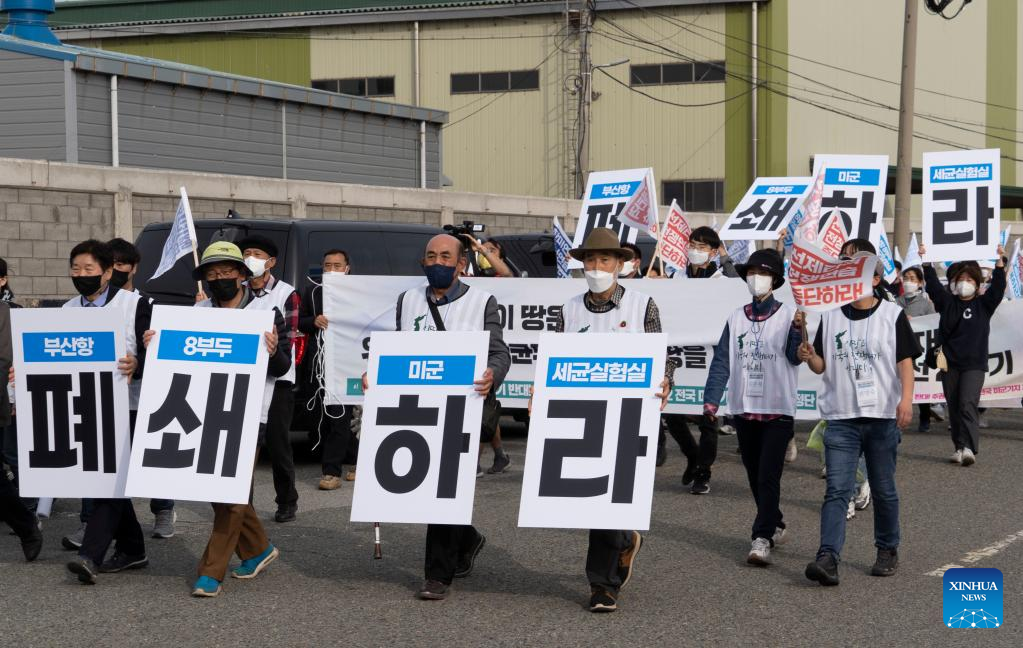 Civic groups and local residents take to the streets to protest against the U.S. biological labs near a U.S. military base in Busan, South Korea, April 5, 2022.(Photo by James Lee/Xinhua)

Enraged at the opaqueness of the U.S. biological labs, civic groups and local residents have taken to the streets to demand the U.S. military take its hazardous weapons and vacate the country.

The U.S. military has secretly run its biological weapons program in South Korea since at least 2009.

It was made known to the general public here in 2015 when live anthrax samples were sent from a U.S. military lab through postal service FedEx to the Osan Air Base in Pyeongtaek, about 70 km south of the capital Seoul.

The USFK initially said it was the first time it experimented with deadly biological agents. But a joint panel investigation showed that the USFK brought in and tested dead anthrax samples 15 times at the Yongsan Garrison in central Seoul between 2009 and 2014.

In addition to the live anthrax samples delivered in 2015, one milliliter of inactivated plague samples was sent to the Osan Air Base, revealing the USFK's false explanation.

Article 9 of the South Korea-U.S. Status of Forces Agreement (SOFA) stipulates that a custom's examination "shall not be made" in case of "military cargo consigned to the U.S. armed forces," according to a document posted by the South Korean Foreign Ministry.

"According to the SOFA, the U.S. military cargo is exempt from customs inspection, allowing (the USFK) to bring in whatever it wants ... (South) Korea is a very friendly country for the United States to import germs and conduct tests," Lee Jang-hie, emeritus professor at law school of Hankuk University of Foreign Studies, told Xinhua.

The law professor said the delivery of anthrax samples to South Korea violated the Biological Weapons Convention, signed by over 180 nations, including South Korea and the United States, to ban the development, production, stockpiling, acquisition or retention of biological agents or toxins.

The violation of the 1975 convention requires the UN Security Council's official investigation at the request of the country concerned.

"Lax regulations and the Korean government's reluctance to protest against it created an easy, favorable environment (for the U.S. military) to carry out experiments with germs here," Lee noted.

Overseas hub of US bioweapons experiments