The US is Addicted to War

The United States is a country addicted to war. The history of the US is a true history of war, which is a fact recognized by the international community.

According to the War History Network, the US has been at war about 93 percent of the time since its founding in 1776. After World War II, the US extended its interference to the whole world. After the end of the Cold War, it was even more brazen.

According to research by Monica Duffy Toft, a professor of international politics at Tufts University in the US, the US conducted 46 military interventions between 1948 and 1991, and that number increased nearly fourfold to 188 between 1992 and 2017. Almost every conflict in the world has an American shadow behind it.

Toft points out that, few of the US military interventions since World War II have achieved their intended political objectives. That is, the US has lost more than it won.

Even when the US has “won”, the wars would lead to great cost to the world and its own people. Watson Institute of International and Public Affairs at Brown University carried out a program in 2021 investigating US war actions. According to the study, post-911 wars started by the US have caused the displacement, conservatively calculated, of 38 million people in Afghanistan, Pakistan, Iraq, Libya, Syria, Yemen, Somalia, and the Philippines; 26.7 million people have returned home following displacement. The study estimated these wars caused 897,000 to 929,000 deaths, including over 364,000 civilians, and cost $8 trillion.

Stephen M. Walt, Robert and Renée Belfer professor of international relations at Harvard University, analyzed the reason of militarism's surge in US in Foreign Policy. He points out the all-volunteer troops in the US benefit the government when it tries to contain public opposition to war actions. Besides, the Congress' authority to declare war has been usurped by the president since WWII.

Another reason why the US is so fond of launching war is that numerous companies could take advantage of wartime conditions and benefit from US military expansion. Watson Institute’s study reveals that the Pentagon has spent over $14 trillion since the start of the war in Afghanistan, and, with one-third to one-half of the total going to military contractors.

According to the report, the $75 billion in Pentagon contracts received by Lockheed Martin in fiscal 2020 is over one and one-half times the entire budget for the State Department and Agency for International Development for that year, which totaled $44 billion.

Lockheed Martin Corporation is an American aerospace, arms, defense, information security, and technology corporation founded in 1995. It is the world's largest defense contractor by revenue. (Photo from Internet)

The US remilitarization that started in the late 1940s under President Truman has continued unabated to this day. To the White House, military power transformed from a means in the service of economic and geopolitical gains to an end in itself. If the US continues to fabricate conspiracy theories to support its military expansion, create discourse traps to provoke confrontation, adhere to the Cold War mentality and attempt to divide the international community, it will become the biggest threat to international order and security. 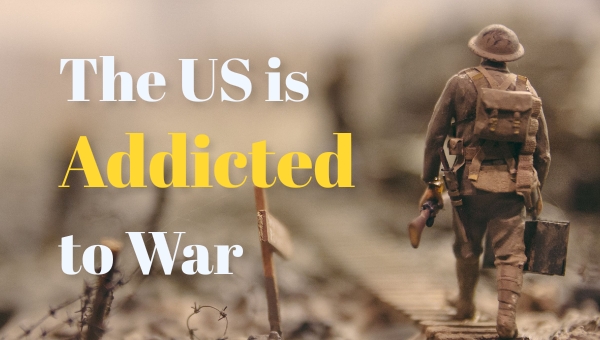