Scrolling the fight against the pandemic

The latest work of artist Chen Zhijie, created this March, focuses on the medical team from the Chinese mainland dispatched to aid Hong Kong. [Photo provided to China Daily]

On first sight, you'd probably think this is an antique Chinese landscape painting. It seems to tick the boxes for such a description. Scroll format? Check. The yellow backdrop? Check. Ancient buildings with gray-green tiles and flying eaves? Check.

But on closer examination, a lot of things don't add up. The skyscrapers are not the only suggestion that this is a modern piece. The medical workers toiling in their signature white and blue protective gear, and in the bottom right corner, parents watching their teenage children walk into the senior middle school with banners in hand that say "pass the exams with flying colors" confirm that this work is contemporary art.

The painting, created by artist Chen Zhijie in Foshan, Guangdong province, portrays the scenes of mass nucleic acid testing in the provincial capital Guangzhou, and is included in his Battling the Pandemic in Solidarity series.

Because of the panoramic format and the traditional landscape painting style, Chen's paintings bear an uncanny resemblance to the fabled classical painting, Along the River During the Qingming Festival, by Song Dynasty (960-1279) painter Zhang Zeduan, a handscroll painting that depicts bustling scenes of Bianjing, the then capital, now Kaifeng in Henan province.

Hence, when the paintings were first circulated on the internet, they were given the nickname "Nucleic Acid Testing on the River".

"This young artist in Foshan painted Nucleic Acid Testing on the River, a modern version of the famous ancient painting Along the River During the Qingming Festival. It captures the touching moments of medical workers, volunteers carrying out the testing," Foreign Ministry spokesperson Hua Chunying posted on Twitter.

Knowing about the nickname, Chen says that he dares not aspire to such an honor. "In terms of artistry, Along the River During the Qingming Festival is a peak that I'll never be able to reach," he says, adding that he likes the handscroll format and the idea of telling stories with paintings.

Nor did he expect these paintings to be widely spread on the internet. The first of his series was created last May, zooming in on Foshan, the city where he works as an art teacher. At the time, COVID-19 cases were found in Guangdong province, and all extracurricular training courses were suspended.

Chen Zhijie created the Foshan painting, the first of his Battling the Pandemic in Solidarity series, last May, adopting a panoramic format and traditional landscape painting style. [Photo provided to China Daily]

He recalls that the weather was very hot. When taking a test, he noticed that the medical workers, wearing full protective gear, were sweating profusely, and he felt grateful for their hard work.

"Everyone needed to take the tests, so I thought about painting the pandemic prevention and control, showing how people are taking preventive measures and are united in the fight. So I gave my students some assignments, wanting them to know that they can show their social concerns through art," Chen says.

He then spent five days, working from 7 am to midnight, creating the Foshan painting. Without a comprehensive composition in mind, he simply started off by painting from a corner of the scroll, and gradually added details, including the landmarks of Foshan and stories he read in the news.

In June, after learning from a Guangzhou COVID-19 prevention and control news conference that it had taken 18.7 million samples from June 4 to 6, he spent another six days working on a Guangzhou painting. 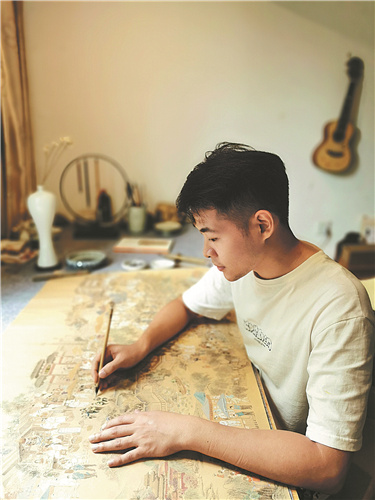 The two paintings, when joined together, are 2.7 meters in length and 75 centimeters in width, including more than 800 characters and 39 landmarks from the two cities.

When he shared the paintings with the group chat that includes the parents of his students, as a sample of the assignment, some of the parents shared the images online, sparking widespread public acclaim.

Many people left comments applauding his artistry and the historical reference value of his paintings. A top Sina Weibo comment says: "This is so awesome. At first, I thought it was an unearthed artifact. But then again, people are the ones who make history."

However, Chen says that he is not satisfied with some of the details and perspectives in the paintings he has created so far. These are merely drafts from which he will re-create a final series of artworks.

The Foshan and Guangzhou paintings were conjoined last July, with the title "Battling the Pandemic in Solidarity" written by leading Chinese respiratory specialist Zhong Nanshan. [Photo provided to China Daily]

When leading Chinese respiratory specialist Zhong Nanshan saw his Guangzhou and Foshan paintings, Zhong wrote down the title "Battling the Pandemic in Solidarity" on the scroll and encouraged Chen to continue creating using this theme, and to do so on a broader, more international scale.

In March, he created another scroll painting, adopting a meticulous painting style and focusing on the medical team from the Chinese mainland dispatched to aid Hong Kong.

"I'm hoping that by the end of the pandemic, I could link all of my scroll paintings together, and tell the stories of the battle against COVID-19 in its entirety," Chen says.

"I want to address the importance of nucleic acid testing through artistic expression. Also, I hope that, using my skills, I can portray our society in this moment, as well as the touching incidents occurring as part of the pandemic controls, so that future generations will know what we went through."