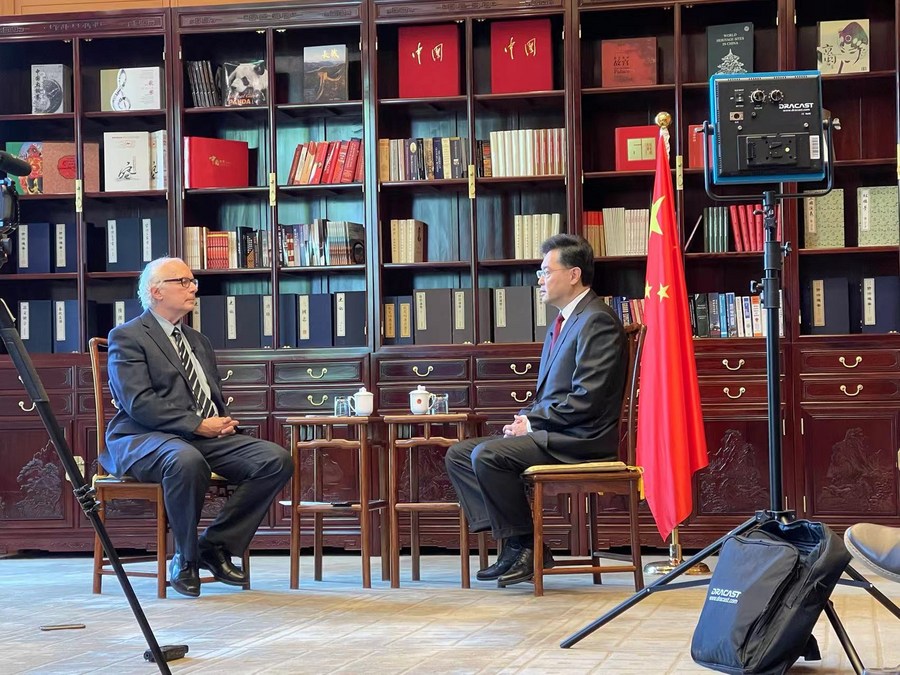 Photo shows Chinese Ambassador to the United States Qin Gang (R) taking an interview with Forbes journalist Russell Flannery on April 29, 2022. (Photo credit: Embassy of the People's Republic of China in the United States of America)

"I think it's time for the U.S. administration to reconsider and to cancel it (the additional tariffs on Chinese goods) as early as possible," Chinese Ambassador to the United States Qin Gang said.

Qin made the remarks during a recent interview with Forbes magazine, which was conducted at the Chinese embassy in Washington on April 29 and was published on Thursday.

"Our trade and business relations have made remarkable achievements, benefiting the two countries and benefiting the world. We are natural partners, because our economies are highly complementary," Qin told the magazine's Shanghai bureau chief Russell Flannery.

Qin said many of the "uncertainties and instabilities" surrounding the China-U.S. business and trade relations these years are caused by the U.S. side. "The Section 301 tariffs imposed by the Trump Administration are still going on. And the United States is now defining China-U.S. relations as intense competition. Under such circumstances, business and trade are being politicized."

"So we hope that the United States should stop politicizing our business cooperation and stop using trade as a tool, so that we could provide more stability and predictability to investors," he said.

Speaking of the additional tariffs on Chinese imports imposed during the Trump administration, Qin said it "hasn't reduced the trade deficit of the United States. On the contrary, it brings more costs to American companies and American consumers."

"I think it's time for the U.S. administration to reconsider and to cancel it as early as possible," he said, adding "if the U.S. side still wants to continue, I don't know if they are prepared for more losses. If they will continue, we have to live up to it." ■