* Chinese President Xi Jinping has called on the younger generation to follow the Party's call and develop themselves into a generation capable of shouldering the mission of national rejuvenation.

* A survey showed that the majority of China's youth wholeheartedly support socialism with Chinese characteristics, and are full of confidence when it comes to achieving the rejuvenation of the Chinese nation.

* The new era has provided Chinese youth with a stage for achieving growth and fulfilling their career goals.

BEIJING, May 9 (Xinhua) -- At the tender age of 16, Li Hanyu, from the southern Chinese metropolis of Guangzhou, is already a seasoned volunteer.

Six years ago, she helped her mother undertake volunteer work at "Tuanyida Square" -- a public venue that marks the first national congress of the Communist Youth League of China (CYLC). Donning a green volunteer jacket, the young girl is now an eloquent guide teaching visitors about the history of the league. 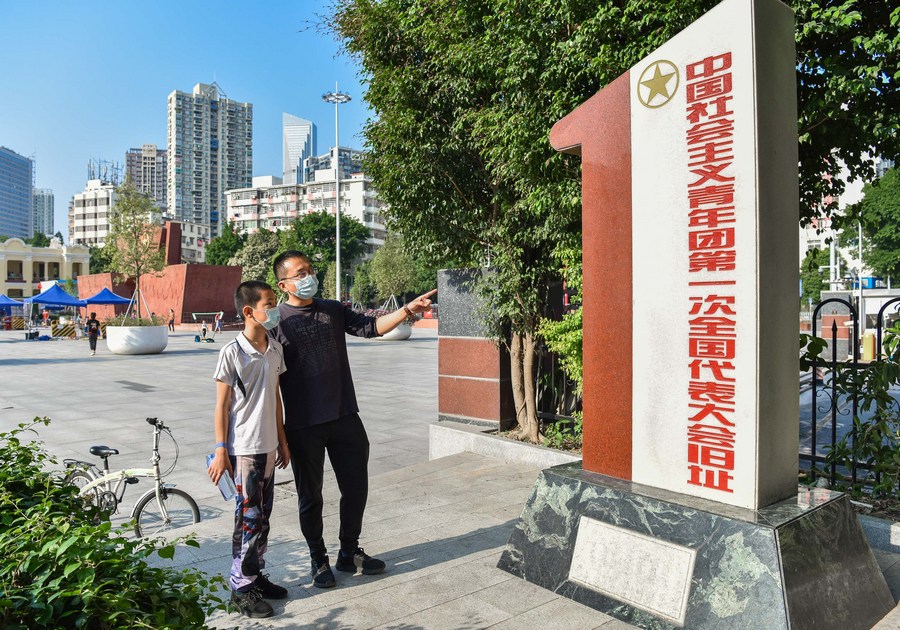 Under the leadership of the Communist Party of China (CPC), the congress was held in Guangzhou in May 1922. "This opened a new chapter of the Chinese youth movement," said Liu Zijian, a researcher specializing in the youth movement.

GUIDING LANTERN FOR THE FUTURE

While attending a themed CYLC event at the China University of Political Science and Law in Beijing before the Youth Day in 2017, Chinese President Xi Jinping said that it is the original aspiration of the CYLC to firmly follow the guidance of the CPC.

"Staying true to this original aspiration is the political choice and course of our young people," said Xi, also general secretary of the CPC Central Committee and chairman of the Central Military Commission.

In recent years, Xi has paid multiple visits to institutions of higher learning, talking with students directly on such occasions, and communicating with young people through letters.

He has called on the younger generation to follow the Party's call and develop themselves into a generation capable of shouldering the mission of national rejuvenation.

A youth survey conducted in 2020 showed that the majority of China's youth wholeheartedly support socialism with Chinese characteristics, and are full of confidence when it comes to achieving the rejuvenation of the Chinese nation.

At a revolutionary site complex in Ciping, east China's Jinggangshan, a young bilingual tour guide, donning a suit, renders his service to visitors.

Mao Haofu, 33, has offered his services on more than 4,000 tours in Chinese and English in Jinggangshan, where the first rural revolutionary base of the CPC, a cradle of the Chinese revolution, was established in 1927.

After studying in Britain, Mao worked in Nanchang, capital city of east China's Jiangxi Province. He later quit his job and returned to his hometown Jinggangshan.

His choice is consistent with the family tradition, as his father and grandfather both devoted themselves to promoting the history of the revolution.

"It was the happiest thing in my life to be able to return to Jinggangshan and take over the cause from my grandfather," Mao said.

Young Chinese are also showing greater interests in the study of Marxism and Chinese political philosophies and theories.

In recent years, a number of teachers from programs focusing on ideological-political lessons have become "online celebrities," earning a sizable following. The innovation they bring to their classes makes Marxist classics easier to understand and relate to.

For example, the teachers and students of Nanjing University filmed a micro-series titled "A meeting in mind with Marx," which discusses Marxism in the form of a play through teacher-student dialogues. The series became an instant hit among young students.

At Fudan University, a volunteer team of Party members is serving at an exhibition hall of the Communist Manifesto. The volunteers include young teachers and doctoral and postgraduate students. They named the team "Spark," which signifies that each member can ignite the passion for learning about the power of Marxism. 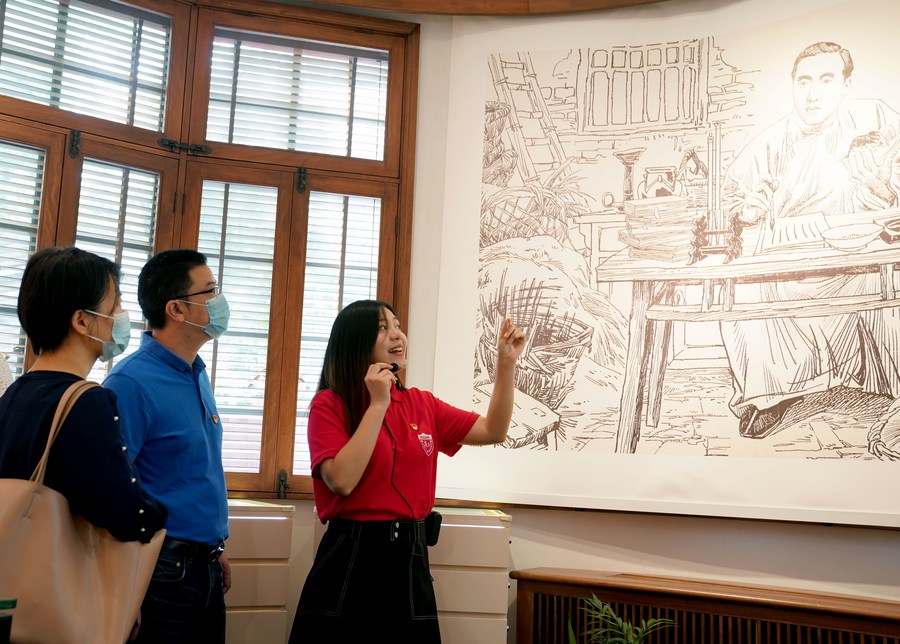 Lu Tingting (R), a member of volunteer team of Party members, works at an exhibition hall of the Communist Manifesto at Fudan University in Shanghai, east China, June 30, 2020. (Xinhua/Liu Ying)

The new era has provided Chinese youth with a stage for achieving growth and fulfilling their career goals, allowing young people to make achievements in various sectors and fields.

Yang Hongqiong, who won three gold medals at the Beijing 2022 Paralympic Winter Games, was born in a rural village in southwest China's Yunnan Province. At the age of 14, she fell down a hill and suffered a spinal cord injury, rendering her unable to stand or walk.

She took a turn for the better in 2014 after joining the wheelchair basketball team of Yunnan. She was later selected to join the national team for Para cross-country skiing. 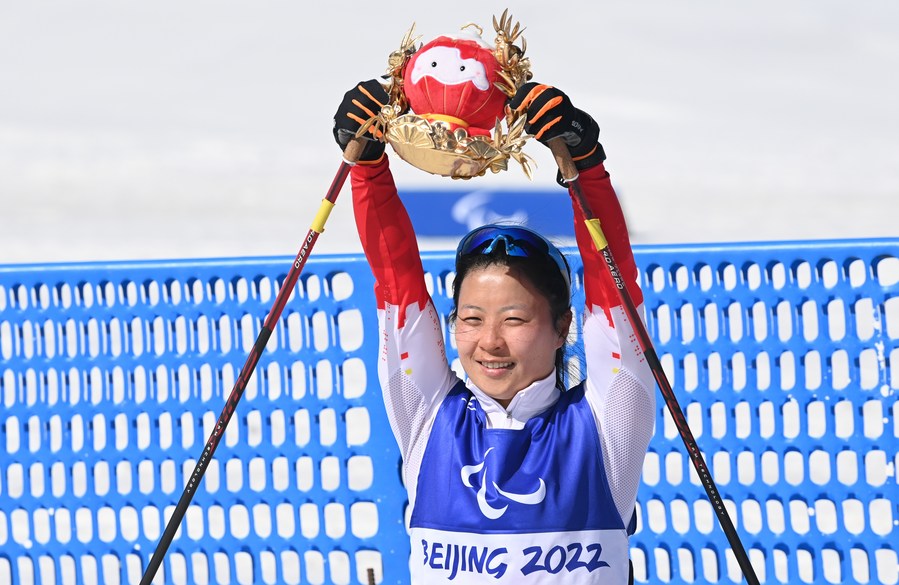 "I deeply feel that the improved national strength and better treatment for people with disabilities have enabled many physically challenged people like me to participate in winter sports," Yang said, adding that they are more confident to realize their dreams on the international stage.

Miradil Mamtawla, a young man of the Uygur ethnic group, hails from a county located at the southern edge of China's largest desert, the Taklimakan. He founded a business selling specialties of his hometown while still a college student in Nanchang.

He stayed in the city after graduation and decided to expand his business by opening a restaurant. "It is the country's sound policies that changed my life," Miradil said.

There are a large number of young entrepreneurs in China, just like Miradil. Among the founders of various market entities registered since 2014, more than 5 million are college students and fresh graduates.

New and rapidly rising industries and new business forms have given birth to a large number of new career options for young people in China, such as livestreaming hosts, and web writers.

Jiang Lianchao, a college graduate, chose to start his business in a small village in Hunan Province. With the help of Jiang, local villagers have turned to poultry farming. Recently, Jiang has started selling his products through livestreaming to expand the market.

Many young individuals of Jiang's age have taken the lead and shouldered important responsibilities in China's missions aiming to achieve key scientific breakthroughs. The average age of the core members of the research groups on the BeiDou Navigation Satellite System is 36; the corresponding figures are 35 for the quantum science satellite Mozi and 30 for the five-hundred-meter aperture spherical telescope Tianyan.

As the living standards of Chinese have taken a great leap forward, overseas education has become more accessible to average young Chinese.

A period spent overseas had strengthened Qiao Lin's resolve to throw pottery. She was born into a family of ceramics workers in Shanxi Province, where Fahua artwork has been made for centuries.

"When I saw foreigners' enthusiasm for Fahua artwork in the United States, I considered passing on the skill and even invigorating the handicraft," she said.

The young woman, who had been studying at a university in the United States, decided to return to her hometown. Qiao has dedicated herself to exploring new Fahua pottery designs including innovations in color glazing, and her artworks are particularly popular among young people.

"We should combine these ancient techniques and traditions with modern life," she said. 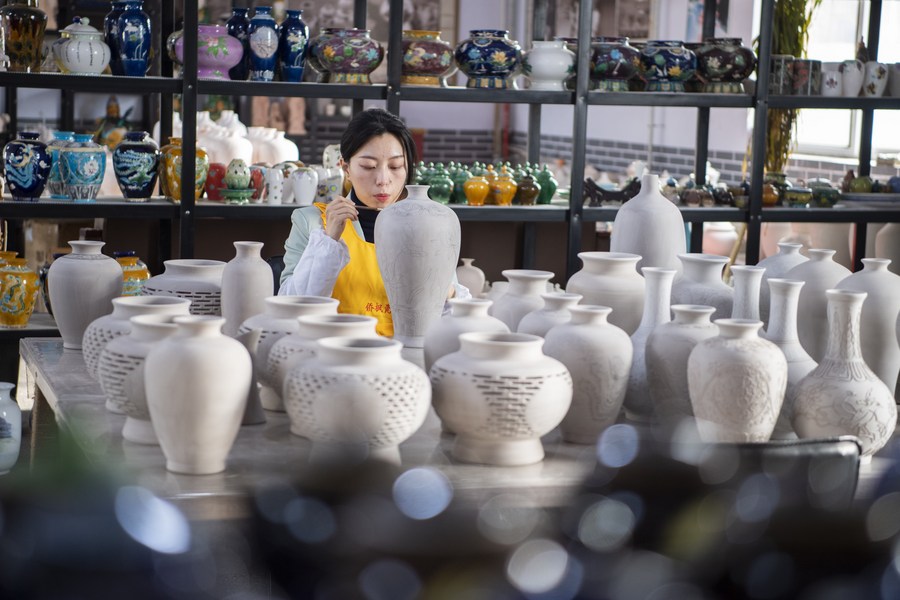 Statistics showed that in 2019, more than 700,000 Chinese students went abroad for education, while the number of overseas returnees exceeded 580,000.

With the Belt and Road Initiative, more and more young Chinese are going abroad to start businesses or work. Hundreds of thousands of young Chinese work hard on foreign lands, contributing to local development.

Sun Xinming, an employee at the China Civil Engineering Construction Corporation, is one of them. He is a project manager in Kenya, leading a young team for the Mombasa Port area road development project.

"Having worked in Kenya for six years, I have had the opportunity to improve myself," Sun said, adding that being part of the efforts to contribute to local economic and social development is gratifying.

In an interconnected "global village," Chinese youth have grown more proud, confident and assured of their Chinese identity, reflecting the nation's ever-improving image on the international stage.

President Xi said today's young Chinese should not only care about their family and country but also have concern for humanity.

He called on them to promote the spirit of "a shared community for all nations" and "pursuing a just cause for the common good" as championed by the Chinese culture, strive for national rejuvenation while contributing to the Belt and Road and a community with a shared future for humanity.

"Young people are the future of every nation and of the world," Xi said.