* Several White House officials, as well as President Joe Biden himself, have signaled that the administration is weighing whether to dismantle at least some of former President Donald Trump's tariffs on Chinese goods.

* Even Yellen said in an interview with Bloomberg Television that removing Trump-era China tariffs would have some "desirable" effects on inflation and "it's worth considering."

WASHINGTON, May 12 (Xinhua) -- As inflation hovers near a 40-year high, U.S. trade groups and economists have been urging the Biden administration to scrap Trump-era additional tariffs on Chinese imports, regarding such tariffs as counterproductive to the U.S. economy.

These tariffs, with no good policy purpose, were an unnecessary tax on U.S. consumers and businesses, they said, noting that eliminating or at least reducing them would help lower elevated inflation and stabilize inflation expectations.

But with the mid-term elections coming up, some lawmakers, who are keen to take a tough stance toward China, might be reluctant to support the easing of China tariffs, refraining from doing the "right thing" for American businesses and people. 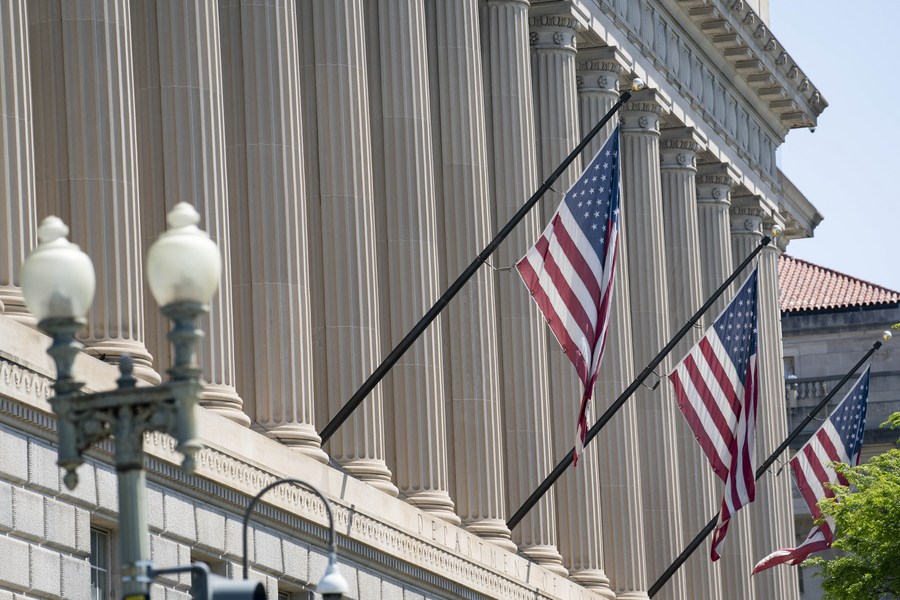 Several White House officials, as well as President Joe Biden himself, have signaled that the administration is weighing whether to dismantle at least some of former President Donald Trump's tariffs on Chinese goods.

"We're discussing that right now. We're looking at what would have the most positive impact," Biden told reporters after a speech on inflation Tuesday, noting that no decision has been made.

Republican Senator Mike Crapo also called for "thoughtful application" of the Section 301 tariffs on China. "We need to cut tariffs on inputs that support American manufacturing, or on goods consumed by the American consumer, especially middle and low income families," he said at a Senate Finance Committee hearing.

Such voices came as the United States is experiencing the highest inflation in four decades, with the consumer price index (CPI) staying over 6 percent year-on-year since October last year. According to the Labor Department's data released Wednesday, CPI in April surged by 8.3 percent from a year ago, marking the second straight month of inflation over 8 percent.

Although price growth showed signs of easing in April, the latest CPI data "served as a stark reminder" that the Federal Reserve has a long road ahead of it in bringing down inflation," Sarah House and Michael Pugliese, economists at the Wells Fargo Securities, said in an analysis. 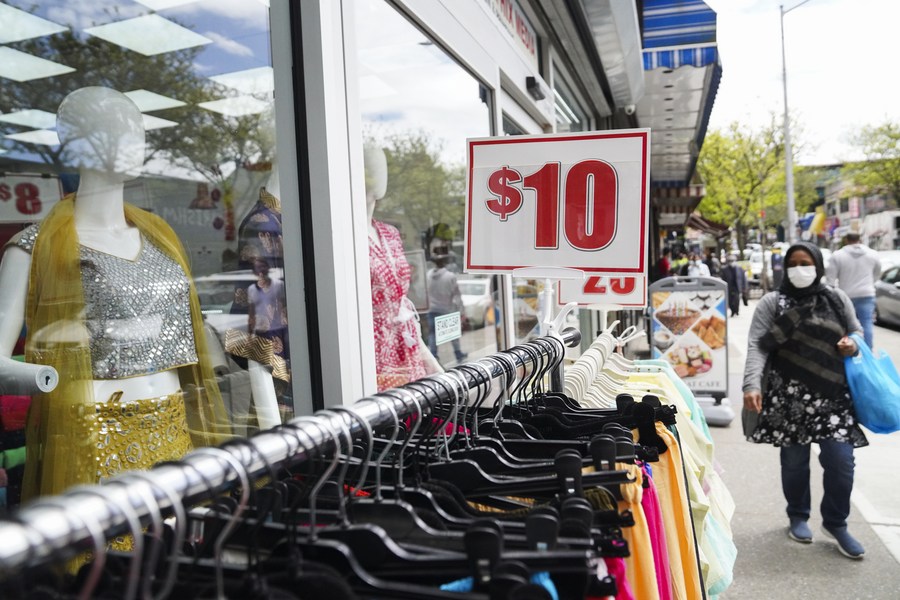 A woman walks past a store in New York, the United States, May 11, 2022. U.S. consumer inflation in April surged by 8.3 percent from a year ago. (Xinhua/Wang Ying)

"Americans are unhappy about rising inflation and costs, so providing tariff relief soon is one way to lower prices and increase demand, especially for consumer goods," the U.S.-China Business Council (USCBC), which represents 260 American companies that do business with China, told Xinhua on Wednesday.

The trade group said earlier that there is "no reason" to maintain the additional tariffs on Chinese products imposed during Trump's presidency, as they were an "unnecessary tax" on U.S. consumers and businesses "for no good policy purpose."

Not only hurting U.S. businesses and workers, tariffs also drive up prices, and inflation expectations are starting to rise, according to an Axios report entitled "Trump's trade war on China was a failure in every possible way."

In a recent research, Gary Hufbauer, nonresident senior fellow at the Peterson Institute for International Economics (PIIE), and his colleagues Megan Hogan and Yilin Wang argued that the direct effect of eliminating additional tariffs on Chinese products would be a 0.3 percentage point reduction in CPI, but there would also be an indirect effect, which will add "substantially" to the 0.3 percentage point.

"It would be a pretty big signal to U.S. firms that they are going to face more competition and that might cause them to moderate their price increases as inflation rolls forward," said Hufbauer, also a former U.S. Treasury official. 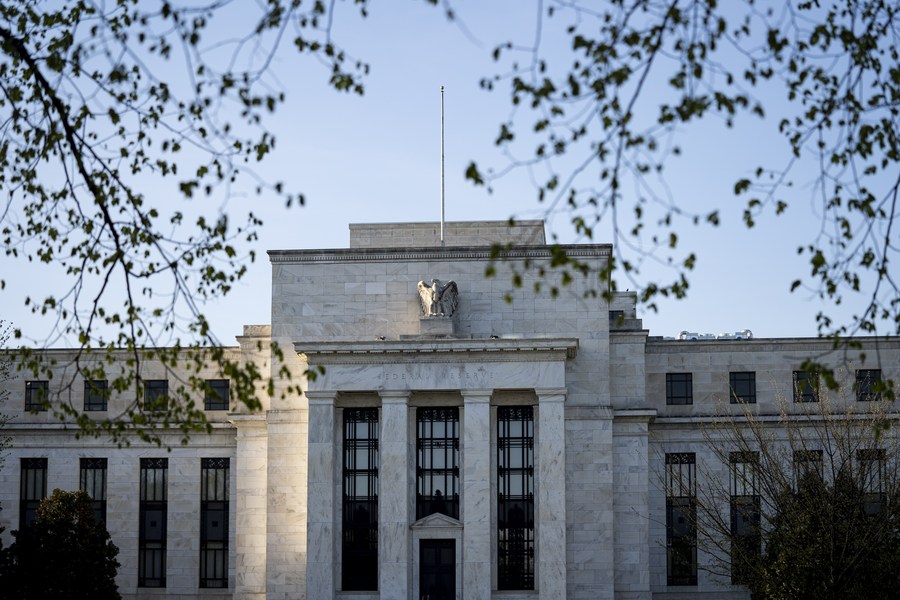 In reaction to the argument that reducing the China tariffs would not lead to a meaningful reduction in prices, Hufbauer said it doesn't completely eliminate the inflation problem, "but it's better than doing nothing."

"So there's raising interest rates, there's cutting back federal spending, there's reducing tariffs, all of those things have some impact," he said. Against the backdrop of a red-hot economy, "every little bit counts."

The PIIE study showed that "a feasible trade liberalization package" could deliver a one-time reduction in CPI inflation of around 1.3 percentage points. That would save 797 dollars for every U.S. household.

In the view of Former U.S. Treasury Secretary Lawrence Summers, this inflation reduction through tariff removal is "more significant" than anything that can be achieved over the next two to three years through antitrust action, and it is probably much "more important" than the meat packing price fixation, which has been the subject of several presidential events.

Even Yellen said in an interview with Bloomberg Television that removing Trump-era China tariffs would have some "desirable" effects on inflation and "it's worth considering."

Despite encouraging signals on tariff reduction, some lawmakers, who crave an edge in the November mid-term elections, might be reluctant to ease China tariffs, according to observers.

"The midterms are very unlikely to result in any relaxation of the various tensions between U.S. and China, including tariff legislation," Greg Cusack, a former member of the Iowa House of Representatives, told Xinhua.

"Candidates being fielded by the Republicans are even more right-wing and extreme than the current congressional membership, and Democratic candidates across the board will be fighting an uphill battle in which they cannot afford to be seen as 'weak' or as in any way 'caving to China'," said Cusack, a longtime Democrat.

"Congress does not have a lot of incentive to do the 'right thing' unless it is likely to boost their poll standing or bring in more campaign funds," he noted.

Senator Josh Hawley of Missouri, who, according to the Washington Post, "tries to grab the mantle of right-wing populism," recently tweeted that now is "not the time to go soft on China." Customers shop at a store in New York, the United States, May 11, 2022. U.S. consumer inflation in April surged by 8.3 percent from a year ago. (Xinhua/Wang Ying)

Leaving his comment below, a Twitter user said: "It is literally causing inflation. You complain about inflation. And you complain when they try to alleviate inflation. Just say that you don't have a value system. You want to say no."

"We need to put what is best for our country, not a political party. Stop playing games," wrote another user.

It's not just Republicans who want to play the China card. Democratic congressman Tim Ryan of Ohio claimed that lifting tariffs on "non-strategic" goods from China would be a major mistake, blaming China for U.S. workers' economic woes.

Under the current political environment, Hufbauer said the Biden administration could be reluctant to remove the Trump-era tariffs, because it would have to face criticism for being "soft" on China.

The trade expert reckoned that the House of Representatives and the Senate might be able to reach an agreement on the America COMPETES Act, which could include billions of dollars funding for the semiconductor industry, and expanded tariff exclusion for Chinese products.

There is a better than 50 percent chance that lawmakers could iron out disagreement by summer and provide a series of individually small, but collectively significant tariff exclusion, said Hufbauer.

Chen Fengying, a researcher at the China Institutes of Contemporary International Relations, told Xinhua that since 2018, the trade war has escalated step by step, causing harm to both sides.

Noting that the trade war in the context of globalization will only exacerbate inflation in the United States, the scholar said canceling relevant tariffs is conducive to alleviating U.S. economic problems. 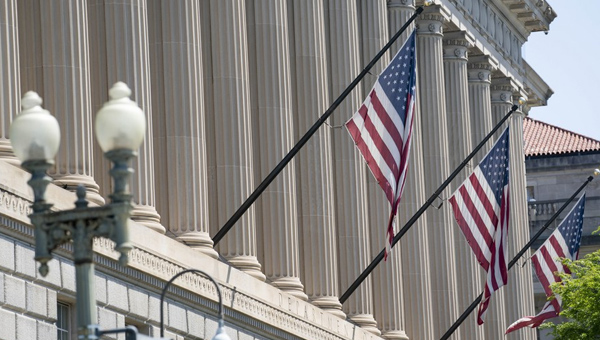