Inflation in the US has soared 8.4% by the end of March this year, hitting a 41-year high. It is the highest annual growth of US inflation rate since December 1981.

On a monthly basis, consumer prices were up by a 16-year high of 1.2% in March. According to Trading Economics, food prices jumped 9.4% this April, the most since April 1981.

Elisabeth Mendes Saigg, 33, whose husband passed away, left to raise a three-and-a-half years old son on her own, said that she has to cut back across all aspects of her daily life: keeping the air conditioner set warmer to help ease energy bills, no longer able to enroll her son in gymnastics, taking on an extra tutoring role at work, and making a box of pasta suffice for four meals for herself so that her son could enjoy his favorite hot dogs and salads.

The price of groceries, rent and utilities has marched higher over the past year; but wages have not kept up, according to media reports.

Soaring gas price has been the main reason behind US high inflation rates. Due to sanctions imposed by western countries since the Russia-Ukraine conflict, gas price in the US has increased considerably. Earlier, the US national average daily gas price have reached a record high of $4.11 per gallon.

Despite the slowdown of gasoline index in April, which may suggest that the inflation has probably peaked, experts believe that the inflation is unlikely to fall to pre-pandemic levels any time soon as supply disruptions persist and food and energy prices remain elevated.

Gloomy forecasts for the US economy

As inflation surges, the US Federal Reserve aggressively hikes interest rates in an effort to cool it down. A number of research institutions in the US have recently lowered their US economic growth forecasts and warned that the US economy may be poised in the next one or two years.

Goldman Sachs Research on May 16 announced that they now expect US economic growth of 2.4% this year on an annual basis (versus 2.6% previously) and 1.6% in 2023 (versus 2.2%). GS CEO said during an interview that there’s a ‘reasonable chance’ of a recession, citing at least a 30% chance of such an event in the next 12 to 24 months as calculated by his firm’s economists.

S&P Global Ratings Chief Economist Beth Ann Bovino said that their qualitative assessment of US economy recession risk over the next 12 months is 30% (within a wider range of 25%-35%).

Michael R. Strain, the director of economic policy studies at the American Enterprise Institute (AEI), released an article on May 18, pointing out that the Fed had fallen painfully behind the curve throughout 2021, failing to see the extent to which inflationary pressures were building. “Whether the US experiences a recession over the next year might hang in the balance,” he said.

According to US Department of Commerce, US GDP registered a sharp annual rate fall of 1.4% in the first quarter of 2022, the weakest quarter since spring 2020.

The Federal Reserve on May 4 raised its benchmark interest rate by 50 percentage point, the biggest hike since the year of 2000, to fight inflation. In addition, the central bank is to eventually reduce its bond holdings by $95 billion a month since June 1. 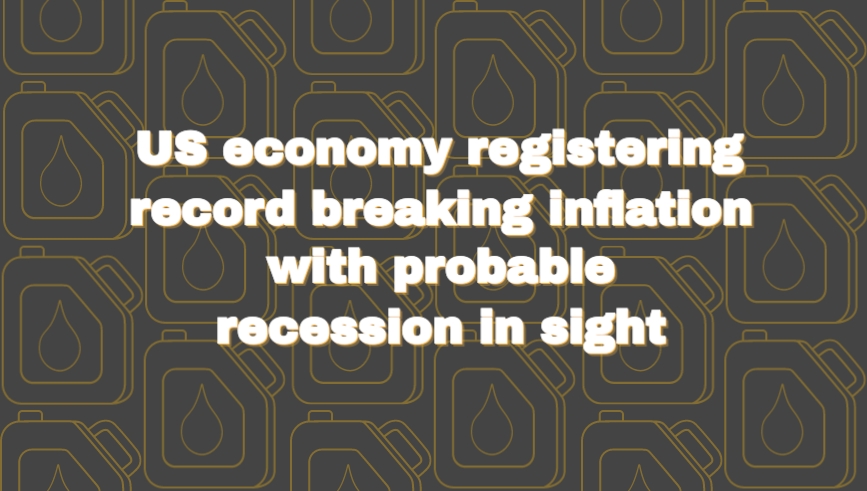