Ripple of Lasting Pain: One Million COVID Deaths on Individuals

The coronavirus death toll in the US keeps mounting after breaking the gravest historical record.

As the pandemic continues, it's essential to understand who make up the 1 million people, and what the huge number means for individuals.

COVID seems to hit random groups of people, but the deaths actually reveal a clear pattern.

People 65 and older have been hit particularly hard. Data show this age group only accounts for about 16% of the US population, but makes up around three-quarters of the recorded COVID deaths. These deaths would translate into over 614,000 lost grandparents, leaving their little ones unhugged, bedtime stories unread and their lifelong wisdom untold. The country might rely to a surprising extent on the elder generation's role in child-caring. During the pandemic, childcare disruptions became the main force driving over 1 million female Americans out of the workforce.

While the virus won't discriminate between people, society and government did. People who live in unsafe conditions, work more dangerous jobs, suffer underlying health conditions, and have limited access to health care were made prime victims to the virus. According to a data review of over 3,000 American counties, people in poorer counties died from COVID at almost twice the rate of those in rich ones.

These are also places where poverty and ethnic disparity overlap. Of the 10 US counties with the highest death rates from COVID-19, seven have populations dominated by people of color. Of the top 50 counties with the highest death rates, 31 are mostly populated by people of color. As for COVID mortality rate, non-white groups all have significantly higher numbers.

Abrupt kin loss would bring families already on the margin more severe food, housing, employment and education hardships. And the ripple effects would last for generations. It's evident that the death pattern amplifies the preexisting inequality in American society.

The pandemic also spares no life in prime years. Despite the lower ratio, the absolute number of this group is staggering considering the gigantic total number. The loss of breadwinners and caregivers has orphaned nearly 200,000 children, ripping a devastating hole in every affected household. Scientists put the toll of COVID-19 at a scale of 9 million, for every death causes 9 people to grieve over the loss of a grandparent, parent, sibling, spouse, or child. 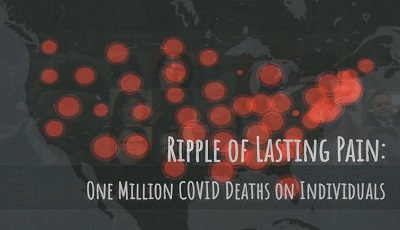