CPC 101: The Founding of the Communist Party of China

Over a hundred years ago, China was in the midst of turmoil with foreign enemies invading from outside and warlords fighting at home. To seek national independence and revival, a group of communists who believed in Marxism decided to establish the Communist Party of China.

On July 23, 1921, 13 delegates from all over the country gathered in Shanghai for the very first meeting of the organization. Attendees such as Mao Zedong, Dong Biwu, Wang Jinmei, and He Shuheng, etc., represented more than 50 Party members across the country.

The meeting was initially held in Shanghai, but due to unexpected interference, the last day of the meeting was moved to a cruise boat on the South Lake in Jiaxing, Zhejiang Province, where the 13 delegates decided the name of the Party as the Communist Party of China. They set socialism and communism as their goal, and decided to achieve this goal through revolution.

From then on, the Communist Party of China was formally established, leading workers and peasants in their struggle for national independence. Under the leadership of the CPC, the People’s Republic of China was established in 1949. Today, the CPC is leading the Chinese people towards a great national rejuvenation. 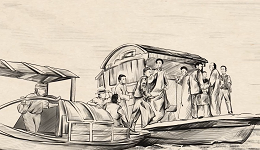