How expansion of NATO poses hidden danger to world peace

The Russia-Ukraine conflict continues to rage, seriously affecting regional security and the world economy. NATO, haunted by its Cold War mentality, is widely recognized as the main culprit behind the outbreak of the conflict and its escalation. Despite the worsening situation, NATO, led by the United States, is contributing nothing to peacefully ending the conflict. Contrarily, it has taken the opportunity to flaunt the value of its existence, increase the military spending and deployment of its member countries, and accelerate the pace of extending NATO’s Article 5 to the Asia-Pacific region in order to serve U.S. hegemony.

NATO held a summit at the end of last month in Madrid and included China in its Strategic Concept document for the first time, arguing that China poses a challenge to NATO’s “security, interests and values” and calling for united efforts against the “systemic challenges” posed by China. It was also the first time that NATO invited the leaders of four Asia-Pacific countries, Japan, South Korea, Australia and New Zealand, to its summit. In the context of intensified strategic competition with China, the U.S. is pushing NATO to extend its tentacles to the region and by doing so it has fully revealed its strategic intent to “contain China with NATO”. It should be noted that the so-called Strategic Concept document is filled with confrontational concepts, Cold War mentality and ideological bias. The document is so disconnected from reality and it smears China for no reason at all. The U.S.-led NATO is trying to conjure up a threat in Europe so it can provoke confrontation in the Asia-Pacific region – this, rather than China, is the real “systemic challenge” to peace, stability, development and prosperity in the Asia-Pacific region.

The Strategic Concept is the guiding document for NATO. After the Cold War, there had been three “strategic concepts” adopted in 1991, 1999 and 2010. NATO touts the documents as an action to “fulfil new missions, admit new members and expand new functions” and to promote the transformation of the alliance. To put more accurately, it’s a vivid recount of how the document has served as a tool for NATO to show its subservience to the U.S. and help maintain the U.S. global hegemony and its interests; and that NATO has been completely reduced to a tool to create “enemies” and fabricate “threats”, and bring harm to regional and global security.

In 1991, the NATO Rome Summit adopted the Alliance’s New Strategic Concept, the first “strategic concept” document issued by NATO after the end of the Cold War, proposing that NATO’s military strategy shifted from “forward defense” of the Cold War to increased mobility to respond to international crises, which laid the foundation for large-scale military interventions in the future. Soon thereafter, NATO intervened directly in the civil war in Bosnia and Herzegovina under the pretense of humanitarianism, helping the U.S. to dominate the situation in the Balkans region.

At the turn of the century in 1999, the U.S. led the second “transformation” of NATO, whose new Strategic Concept for the 21st Century emphasized that NATO should play an important role in defending democracy, freedom and human rights, turning NATO into a tool to promote Western values. At the same time, the document suggested that NATO’s actions to maintain peace and security, when necessary, could extend beyond member states, making possible the “interventionist” and “expansionist” NATO military operations outside the defense zone in the name of group security. Also in 1999, NATO, led by the U.S., launched air strikes against the former Yugoslavia without the approval of the UN Security Council. 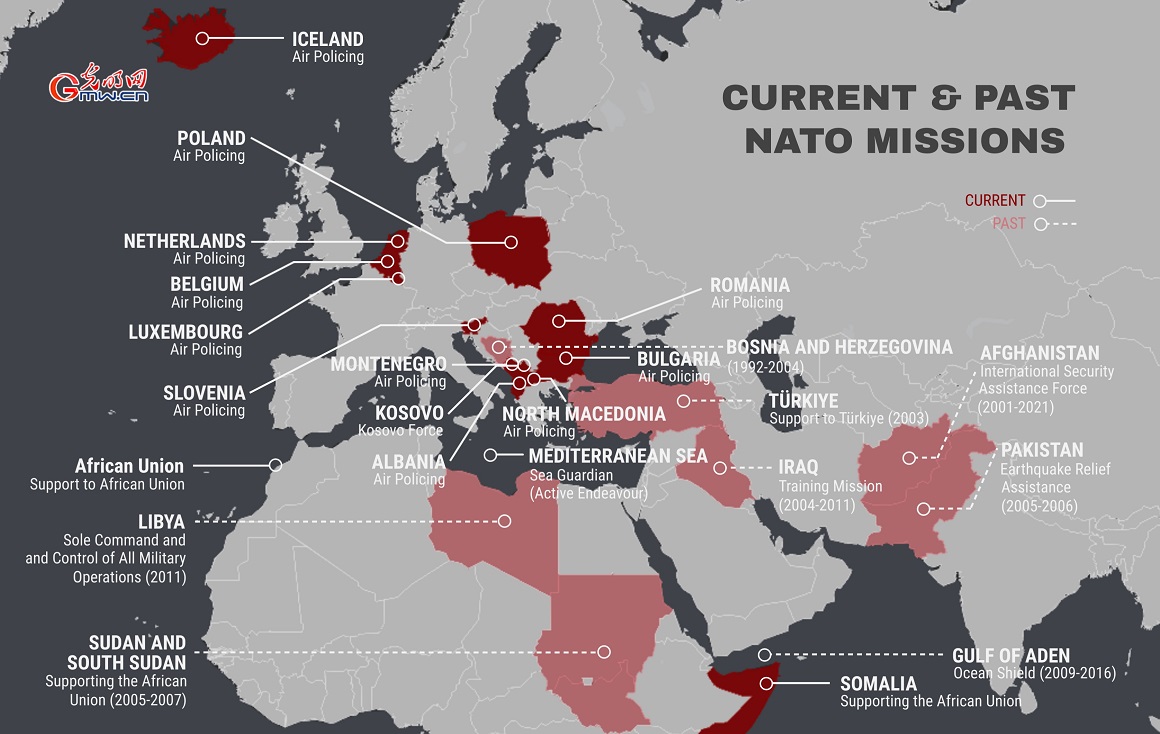 As the world’s largest military alliance, NATO’s survival is driven by adversaries and threats, and after 9/11 highlighted non-conventional security threats, counter-terrorism became the mission of NATO and the reason to justify its aggression of sovereign states. In the name of counter-terrorism, NATO launched military operations against Afghanistan, Iraq, and Libya ...... not only taking more than 800,000 lives, but also resulting in volatile situations in the Middle East and other regions. No wonder the U.S.-led global counter-terrorism stuck into the strange circle of “the more counter-terrorism fights, the more terrorist threats”. It also unveiled how unjust plots of regime change are carried out under the just cover of counter-terrorism.

In 2008, the United States and other Western countries bore the brunt of the international financial crisis, although the “strategic concept” document adopted in the same year no longer considered Russia as the main threat, the U.S. knew its tensions with Russia was a hinderance to U.S. hegemony over Europe and the very survival of NATO. That’s why NATO didn’t stop its eastward expansion, and eventually, it built and pushed the strategic containment line to the doorsteps of Russia. After the Crimean crisis in 2014, NATO has been increasing its military support to Ukraine, squeezing Russia’s security space and ignoring Russia’s legitimate security concerns, which eventually triggered the Russia-Ukraine conflict in 2022.

Since 2017, the U.S. national security strategy has quickly shifted from counterterrorism and regional affairs to conventional great power competition. Since Biden took office, the U.S. has focused on “great power competition” and “long-term competition” with China and other adversaries. It views NATO as the most important strategic tool for maintaining its global hegemony, hence intensified its coordination with NATO allies against China, and urged NATO to compete with China. Due to its security dependence on and the continued pressure from the U.S., NATO’s attitude toward China took a sharp turn in a short period of time, and has become increasingly assertive, despite the fact that China is far from a security threat to European countries. In NATO’s latest “Strategic Concept” document, China was considered a “systemic threat” to Euro-Atlantic security, not only in traditional security areas, but also in “China’s quest to control key technologies and industrial sectors, critical infrastructure, strategic goods and supply chains,” and “China’s attempt to subvert the rules-based international order”.

The “China Threat” is completely groundless. China has always been a positive force for peaceful development in the world. In the face of the overlapping challenges brought by changing geopolitical landscapes and a once-in-a-century pandemic, China has never surrendered to strength, never engaged in bloc politics or confrontation, and never resorted to “decoupling” or “building walls for a small yard”. Quite the opposite, it has provided a large number of public goods to maintain world peace and stability, and to advance global sustainable development.

The “China Threat” then quickly became a pretext and tool for NATO to bridge its legitimacy gap, to promote a “globalized NATO”, and to go beyond the traditional geopolitical and arms race. Despite the ongoing Ukraine crisis, NATO Secretary General Jens Stoltenberg has repeatedly said that “NATO will incorporate the ‘response to China’s rise’ into its new strategic concept,” and bluntly stated that it would be a future priority. The new “Strategic Concept” will, not surprisingly, serve as a basis for NATO’s continued existence in the future.

The new “strategic concept” shows NATO continues to indulge itself in the Cold War mindset. NATO is more willing to picture China as a “threat” than to work with China to address common, non-traditional security challenges. It is also more willing to emphasize its own domination of the security order than to construct a more inclusive regional security order. By provoking contradictions and ideological confrontations of values, NATO is attempting to re-play the “camp confrontation” game in the Asia-Pacific region.

The Russia-Ukraine conflict has been going on for more than five months now. Rather than shouldering up international responsibility to resolve the issue through peaceful dialogue, NATO keeps adding fuel to the fire and pushing up the risk of complicating and prolonging the conflict. More regrettably, the conflict seems to have provided an opportunity for the U.S. to reshape NATO and extend its tentacles to the Asia-Pacific region, thus making it better serve U.S. hegemony. 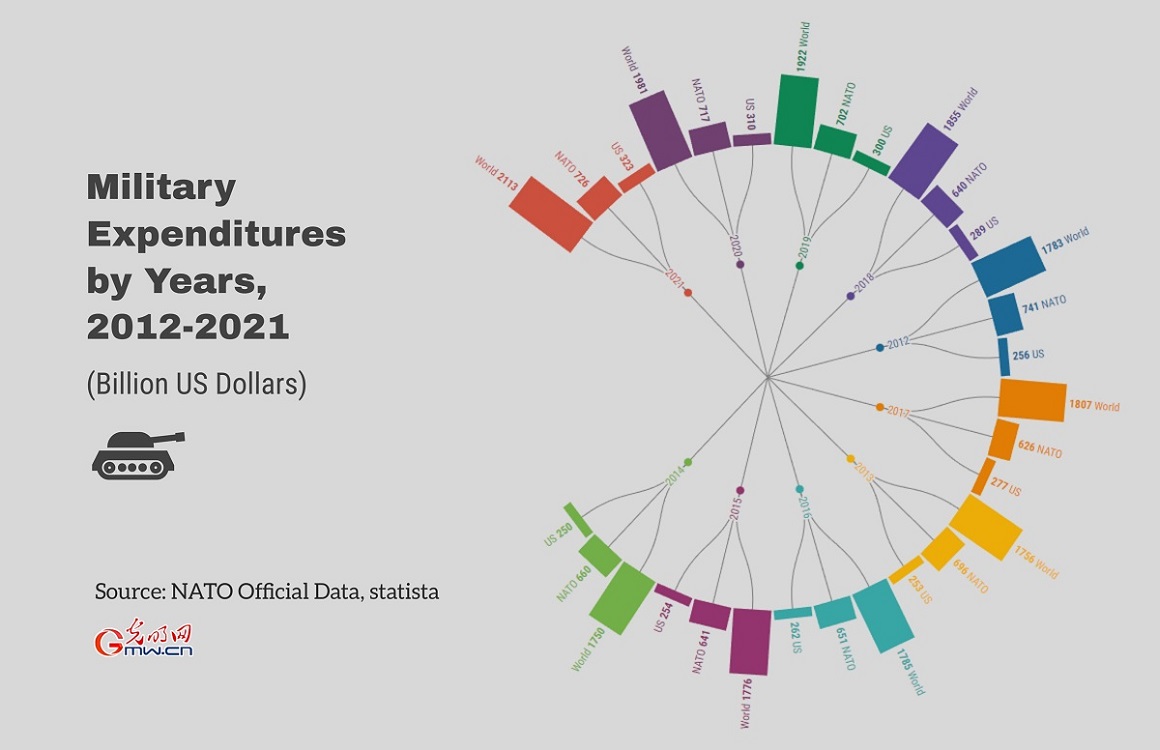 In the “Indo-Pacific Strategy” document released by the Biden administration at the beginning of this year, it was clearly proposed that the “Indo-Pacific Strategy” welcomes the participation of NATO. The “Indo-Pacific Strategy” is essentially a tool of the U.S. to fuel its competition with China at the regional level. As NATO maintains its position that China poses a “systemic challenge”, it would naturally strengthen its military presence in the region, provoke “camp confrontation” and continue to undermine China’s security environment and contain China’s development – the impact of which will certainly not go unnoticed.

In recent years, the U.S. has continued to deepen its “Indo-Pacific Strategy” and has continuously emphasized that alliances and security partnerships are the most important “asymmetric competitive edge” against China. That’s why it has strengthened its bilateral military alliances, the AUKUS and the QUAD mechanisms and other structures in the Asia-Pacific region, and has strengthened the ties between NATO and its allies in the region. The NATO Madrid Summit for the first time invited the leaders of Japan, South Korea, Australia and New Zealand, and during the summit talk of the “NATO Asia-Pacific Partnership (AP4)”, NATO vowed deeper defense coordination and cooperation with Asia Pacific allies. In addition, since the Russia-Ukraine conflict, the U.S. has touted that “the security and defense of Europe and the Indo-Pacific region are inextricably linked” and that “Ukraine today may be East Asia tomorrow”. By hyping up the “security threats” facing the region, the U.S. is encouraging NATO members to increase their military presence in Asia Pacific.

As the most dynamic and promising region in the world, Asia-Pacific is also the region where the interests of China and the United States are most intertwined. The prosperity and stability of the region is of great importance and far-reaching significance to the world. To maintain national security and regional peace, countries in the region have, for a long time, exercised considerable restraint in their security policies, i.e. enhancing military strength while avoiding arms race. As for security cooperation, they hope to have certain security support but refrain from forming new military alliances, nor are they willing to “choose sides” between China and the United States. On this basis, it has become the consensus of the region to build an institutional system that safeguards regional security and stability, promotes intra-regional cooperation, and restrains security behaviors of member countries.

However, in the current process of NATO’s Indo-Pacificization, the United States has increasingly tied its Asia-Pacific allies to NATO, attempting to create a “small bloc” and “political group” against China, instigating countries in the region to adopt a more offensive military policy, and forcing them to “take sides” between China and the United States, and pushing up drastically the risk of camp confrontation. The Asia-Pacific region has a very different geopolitical environment and security issues than Europe. The U.S. and NATO have overestimated their ability in delivering public goods to the region, and are overly optimistic in believing that strengthened military presence would equal to the ability in addressing multiple traditional and non-traditional security issues in the region. Compared to working with China and ASEAN through dialogue and consultation, increasing NATO activities in the region will only exacerbate regional tensions.