Xinjiang: At the forefront of China's opening-up

Xinjiang, located at the transportation junction of the Asia-Pacific economic circle and the European economic circle, is an intersection of the north, middle and south passages of the Silk Road Economic Belt. It’s also a cultural hub that embraces both Eastern and Western cultures and customs. As the frontier of China's westward opening-up, Xinjiang, with its profound historical and cultural heritage and unique geographical, resource, cultural and policy advantages, is gradually becoming a hot destination of domestic and international tourism and investment.

Standing on the Khorgos City Tower, looking into Kazakhstan's vast plains and snow mountains, or watching the buildings rising from the ground and the trucks traveling back and forth across the border, one can get a sense of the city's vitality.

Khorgos is a Chinese border city located in the center of the Eurasian economic sector. It has a land port integrating highways, railways, pipelines, aviation, optical cables and mail. It also has an economic development zone and a comprehensive bonded zone, as well as the first border cooperation center in China -- China-Kazakhstan Khorgos International Border Center.

Khorgos is 1,300 kilometers from Astana, the capital of Kazakhstan, and only 205 kilometers from Almaty. As a key node on the new Eurasian Land Bridge economic corridor, Khorgos has unique geographical advantages for the development of import and export trade. The "Five exemptions and five reductions" policy of Khorgos Economic Development Zone has stipulated the reduction and exemption of enterprise income tax, and the joint inspection mechanism of customs and border inspection departments has greatly shortened the time of customs clearance. All these are favorable policy conditions to attract investment and talents.

On June 7, 2017, Communist Party of China General Secretary Xi Jinping, while attending the video-link ceremony of China-Kazakhstan Asia-Europe cross-border transport in Kazakhstan, proposed to turn the New Eurasia Land-Sea Transport Corridor linking Lianyungang and Khorgos into a benchmark of the Belt and Road Initiative, which will bring greater development opportunities to Khorgos.

Ren Yali, Deputy General Manager of Khorgos Sunshine Jietong Digital Trade Co., introduced, "Our main business is air freight, trucking and railroad. All the goods are shipped from Shenzhen, Yiwu or Guangzhou, and transported by truck to the distribution center in Khorgos for sorting."

She said the cargo volume of Khorgos Sunshine Jietong last year was about 1,156 containers, with the trade volume of 1.5 billion yuan. "Due to the pandemic, our business was suspended after October," she said, "This year so far, our trade volume has reached 400 million yuan."

According to China Customs, the actual inbound and outbound cargo volume of Khorgos Comprehensive Bonded Zone in June 2022 has exceeded the total cargo volume of last year, accounting for 113.39 percent of the 2021 all-year performance.

Across the Tianshan Mountains, Kashgar EDZ is the only region in southern Xinjiang with a state-level economic development zone and a comprehensive bonded zone, it also undertakes the important task of China’s opening-up to the outside world.

Kashgar marks the starting point of the China-Pakistan Economic Corridor, connecting eight countries through five ports, so its geographical location has been extremely important since ancient times.

Zhang Qi, head of Kashgar Zhongshun E-commerce Co., LTD., came to Kashgar in 2020 to start his own business and witnessed the rise of Kashgar Comprehensive Security Zone. "When I first came to the zone, there were only a few factories and few enterprises,” he said. “In the past two years, more and more enterprises have moved in, and the development speed of the comprehensive bonded zone is impressive."

Zhang Qi, when asked of the advantages of the company's location, answered, "We are located in a convenient place for customers from Central Asia and the Middle East, serving Tajikistan, Uzbekistan, Kyrgyzstan, and Afghanistan and Iran, as well as Turkey and Southern European countries. Land transport is much faster compared with shipping thanks to our geographical location. Our customers only need to pay for the logistics cost and the price of the goods themselves, and that’s all, because there are no intermediary charges."

Zhang said his company just realized semi-automation and data informatization in the past two months. Now, the company is busy interviewing new employees and expanding. According to him, the company currently has 60 employees and expects to expand to 150 to meet the New Year's manpower demand.

In the first half of 2022, Xinjiang's GDP growth reached 4.9 percent, the third highest among all provinces and cities in China, and its import and export growth reached 39 percent, the fifth highest in the country. The changes and development in Xinjiang are a successful practice of CPC's strategy of governing Xinjiang in the new era, and an outstanding achievement of the high-level opening-up in multiple fields and levels. 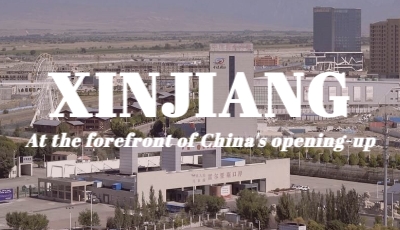