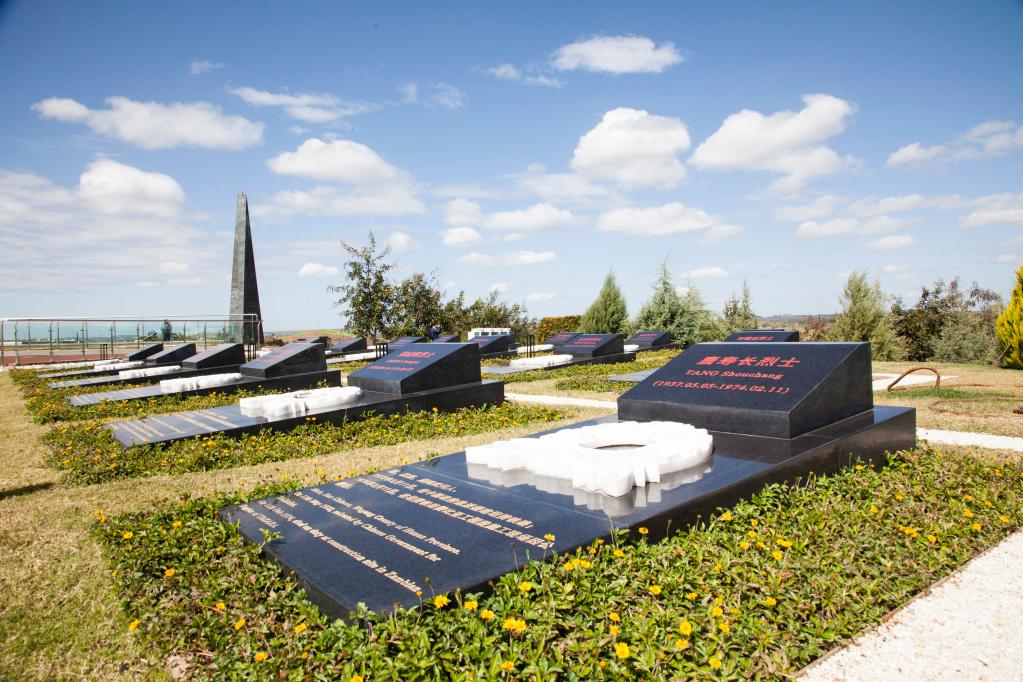 Zambia on Wednesday commissioned a memorial park built in honor of Chinese nationals who died during the construction of the Tanzania-Zambia railway line (TAZARA) in the 1970s.

LUSAKA, Aug. 11 (Xinhua) -- Zambia on Wednesday commissioned a memorial park built in honor of Chinese nationals who died during the construction of the Tanzania-Zambia railway line (TAZARA) in the 1970s.

The commissioning of the TAZARA Memorial Park was attended by Zambian President Hakainde Hichilema and the Chinese Ambassador to Zambia Du Xiaohui, among others.

Constructed by China Civil Engineering Construction Corporation (CCECC), the memorial park has a museum of photographs as well as graves of 36 Chinese engineers and workers who died during the construction of the 1,860 km railway line which links Zambia and Tanzania.

The layout of the Memorial Park is a dominating Chinese Knot viewed from above, which is a traditional Chinese cultural symbol for eternity.

The commissioning ceremony started with a tour of the museum as well as the laying of wreaths in honor of the fallen heroes.

In his remarks, the Zambia president thanked workers from the three countries who sacrificed their lives to build the railway line. 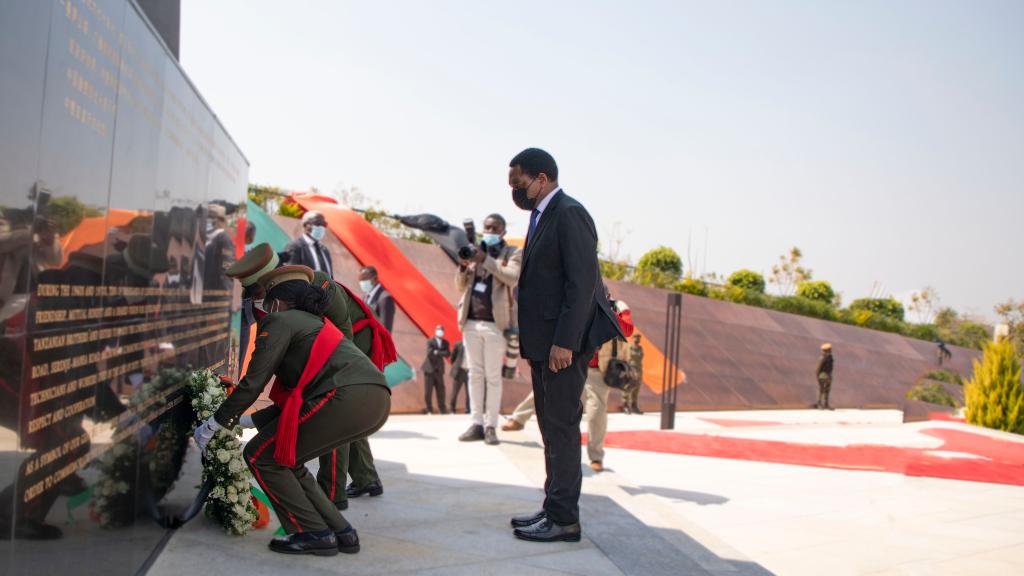 Zambian President Hakainde Hichilema (R, Front) stands as a wreath is laid in honor of the Chinese nationals who died during the construction of the TAZARA railway line in the TAZARA Memorial Park in Chongwe, Lusaka Province, Zambia, on Aug. 10, 2022. (China Civil Engineering Construction Corporation/Handout via Xinhua)

He said it was incumbent upon the current generations to reflect on the sacrifices made by ensuring that the railway line was revitalized.

He added that during his recent visit to Tanzania, the two governments also reaffirmed their resolve to ensure that the railway line was revitalized in partnership with China.

The Zambian president said the current generation had a duty to carry on the spirit exhibited during the construction of the railway line by being committed to duty.

"The best way to remember our foreign heroes is to revive TAZARA," he said.

Hichilema further said the memorial park will become one of Zambia's key tourist attraction centers and directed the ministry responsible for tourism to ensure that it becomes part of the country's tourism package. 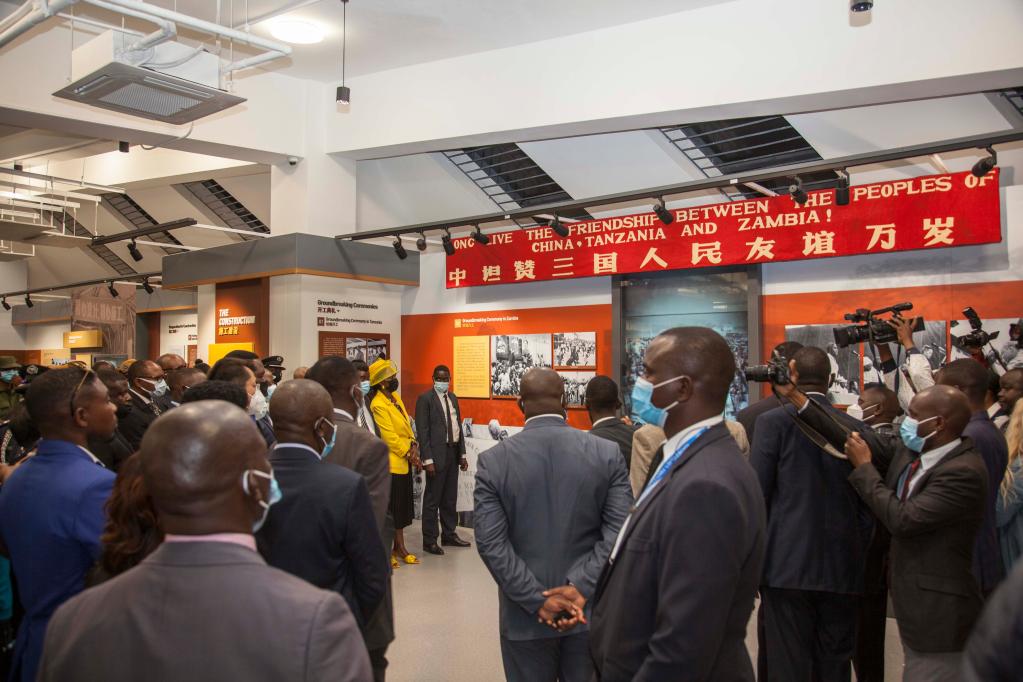 On his part, the Chinese envoy said the best way to honor the martyrs of the TAZARA construction was to reactivate the railway line which has been facing operational challenges.

Du said the Chinese government was currently embarking on efforts aimed at revitalizing the railway line following a request from the governments of Zambia and Tanzania.

According to him, the reactivation of the railway line will not only help Zambia solve its transportation challenges and promote the export of more products but was an important part of the Belt and Road Initiative.

He noted that once reactivated, TAZARA will be a convenient, safe and environment-friendly mode of transportation that could promote the development of Zambia's copper mining industry.

China, he said, was willing to work with Zambia and Tanzania to promote South-South Cooperation and safeguard international fairness and justice.

TAZARA was constructed as a turnkey project between 1970 and 1975 through an interest-free loan from China, with commercial operations starting in July 1976, covering 1,860 kilometers from Dar es Salaam in Tanzania to New Kapiri Mposhi in Zambia. ■ 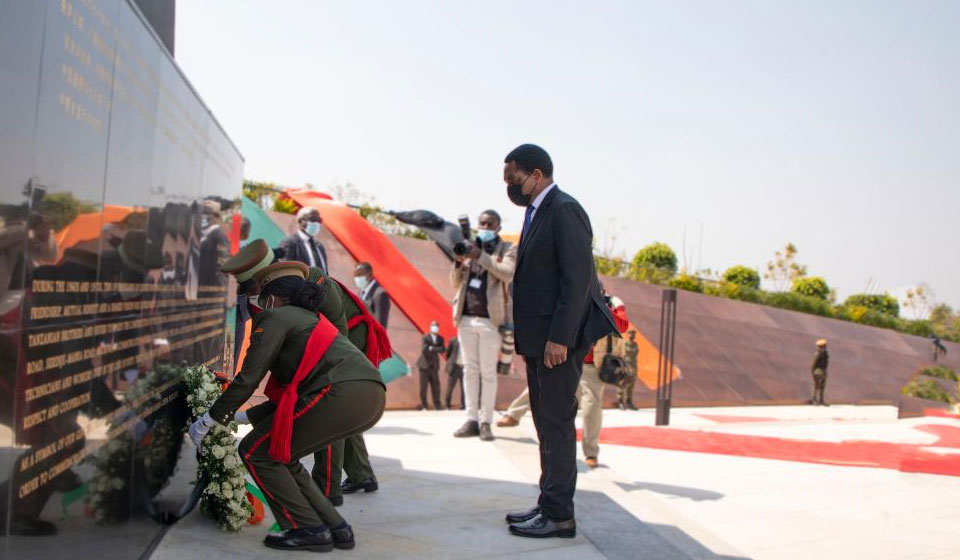