Russian Ambassador: Connecting the Eurasian Economic Union and the Belt and Road Initiative

In 2019, Mr. Andrey Denisov, Russian Ambassador to China, received an interview with Sun Chao, head of the Belt and Road Ambassador Interview Program, and shared his views on multiple topics regarding China’s development and bilateral relations between China and Russia. 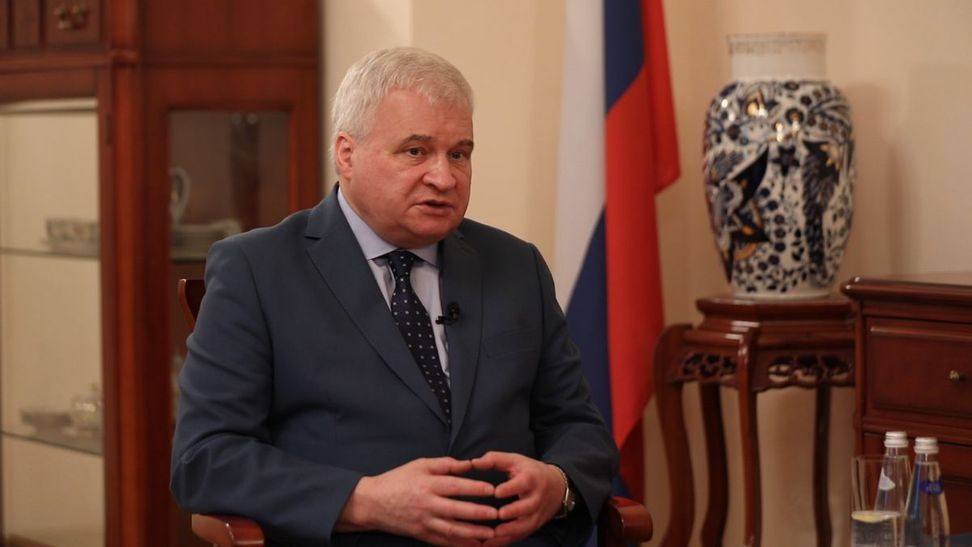 First came to China in 1973, Ambassador Denisov has witnessed China’s development for nearly half a century. Denisov is impressed by the remarkable achievements delivered by China through reforms and the country’s contribution to global poverty eradication. He also noted that Russia as a member of the Eurasian Economic Union, will work to promote the connection between the organization and the Belt and Road Initiative.

The following are highlights of Ambassador Denisov’s insights in the interview.

The life of Chinese people has changed absolutely. China has the largest population in the world, but reforms changed life everywhere. One figure I want to refer to is that in the period of Chinese reforms, about 700 million in China have overpassed poverty. That is the greatest contribution to global poverty eradication. There are no other examples in modern history, only here in China.

Characteristics of the Belt and Road Initiative

First, it is an open initiative. It is not some kind of closed club or bloc of countries, where there are seniors and juniors. It is like a family. If you want to be with us, welcome. Second, the Belt and Road is a rich and broad initiative. It is not just putting rails, but setting up factories, enterprises, introducing high technology and the new branches of industry around the infrastructure routes, like railway routes, roads, or harbors, thus boosting comprehensive development.

Connecting the Eurasian Economic Union and the Belt and Road Initiative

We need more positive and integrated initiatives. For example, my country, as a member of the Eurasian Economic Union, suggested that we should not just cooperate with China within the Belt and Road Initiative, but set up some kinds of connection, or docking the programs and plans of the economic development within the Eurasian Economic Union and the Belt and Road Initiative.

Role of compound talents in building closer ties among countries

There is only one way to keep closer and to exchange views: to meet, to discuss. The problem is that we need some kind of combination. I mean language plus profession, plus some areas. For example, experts on agriculture, modern agriculture, or medicine in my country, speaking Chinese, in your country, speaking English or Russian, it is very helpful.

We need more cooperation in investment projects, not just trade. We need long time projects, we need projects with joint production, then we need more projects in high technology, in innovation areas with good prospects from the point of view of international trade. We can use the results of such cooperation not only in your country or my country, but in other countries as well. We can export the results of the products of our common cooperation.

Views on the energy cooperation between China and Russia

China wants to diversify energy supply. We want to diversify energy delivery. That is where our interests coincide. That is why we are interested in a long-time, large-scale and mutually beneficial cooperation. But not only gas, we have the same in oil. Russia is the top exporter of oil on Chinese market. We keep that position for several years already and are ready and eager to keep it in the forthcoming years as well.

What do we mean by saying “new era”? First, it’s a new era in our bilateral relations because we have reached such a level that we have not just to go up, but go both left and right to make it more comprehensive, more coordinated, more modern, and more deeply rooted. This is the first. The second is that we witness great changes in the whole world on the global scene. We have to adapt ourselves and act according to new developments in international relations.