CAIRO, Aug. 23 (Xinhua) -- By hiking interest rates four times in a row this year, the U.S. Federal Reserve halted its ultra-loose monetary policy that had been in place for years, forcing countries in the Middle East to struggle for financial resilience in the face of various domestic and international challenges.

Abusing the U.S. dollar's status as the world's dominant reserve currency, the United States continues to play the game of loosening and tightening monetary policy in favor of its own interests, regardless of developing countries' difficulties in maintaining macroeconomic and financial stability in a highly unsettled global economic environment.

Many officials and scholars in the Middle East have denounced the U.S. practice of manipulating its monetary policy at the expense of other nations, advocating "de-dollarization" and calling for an end to "the U.S. dollar's hegemony."

In Tunisia, a strong dollar and sharp rises in grain and energy prices are expected to widen its budget deficit to 9.7 percent of GDP this year from a previously forecast 6.7 percent, said Tunisian central bank governor Marouan Abassi.

By the end of 2022, the country's outstanding public debt will reach 114.14 billion dinars (35.86 billion U.S. dollars), accounting for 82.6 percent of its GDP. Tunisia is heading for default if the current deterioration in its finances continues, investment bank Morgan Stanley warned in March.

In Egypt, foreign investors, who were looking for safe havens to put their money after the Federal Reserve's interest rate hikes, pulled more than 20 billion dollars of hot money outside the country, according to Walid Gaballah, a member of the Egyptian Association for Political Economy.

The outflow of hot money is only one side effect. Egypt also saw a decline in foreign reserves, currency devaluation and rising commodity prices. The Egyptian central bank raised benchmark interest rates by 200 basis points on May 19 after prices surged at their quickest pace in three years. It raised rates for the first time in 18 months in March, by 100 basis points.

According to Gaballah, it is impossible for countries like Egypt not to take the Federal Reserve's monetary policies into account when making choices because of the dollar's hegemonic status.

Roger Kelly, an economist in the Economics, Policy and Governance Department of the European Bank for Reconstruction and Development, recently told Türkiye's newspaper Dünya that the Fed's decision to increase interest rates heightened risks for Türkiye.

Türkiye's annual inflation hit 79.6 percent in July, the highest in 24 years. One dollar was traded at 18.09 Turkish liras on Sunday morning, marking an over 100-percent value loss on the part of the lira compared to a year ago when the exchange rate was 8.45 liras per dollar. 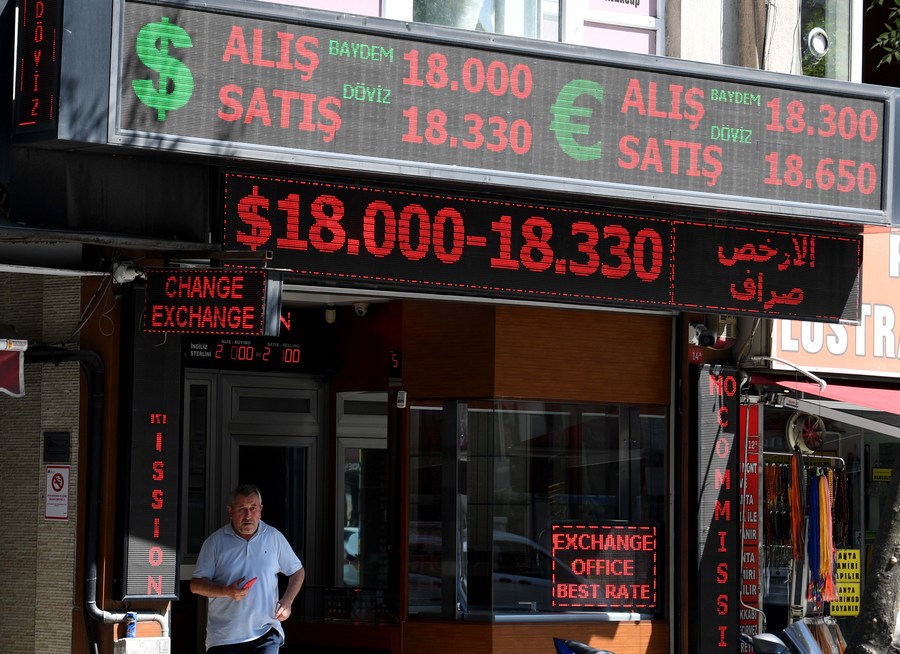 A man is seen outside a foreign exchange office in Istanbul, Türkiye, Aug. 18, 2022. (Xinhua/Shadati)

While the developing countries lose, the United States gains. Data shows that the U.S. Federal Reserve's balance sheet has grown from around 4 trillion dollars in March 2020 to nearly 9 trillion dollars today.

Experts believe another strength of the U.S. dollar lies in its power to enforce sanctions. The United States could easily impose sanctions on individuals, organizations or even an entire country by blocking its access to the SWIFT, the Society for Worldwide Interbank Financial Telecommunication's global messaging system.

Iran has been a target of cruel U.S. sanctions over the past four decades. The sanctions have intensified following Washington's withdrawal from a 2015 nuclear deal.

The sanctions blocked the ordinary channels of international cooperation and hindered Iranian patients' timely and effective access to medicine and medical equipment, said Zahra Ershadi, Iran's deputy permanent representative to the United Nations, at a UN General Assembly session on HIV and AIDS in June.

Ahmad Al-Ashqar, a Syrian journalist and political expert, told Xinhua in a recent interview that the United States aims to continue imposing illegal economic sanctions that impede the urgent reconstruction of Syria's infrastructure and prevent the arrival of necessary medical equipment and medicines. 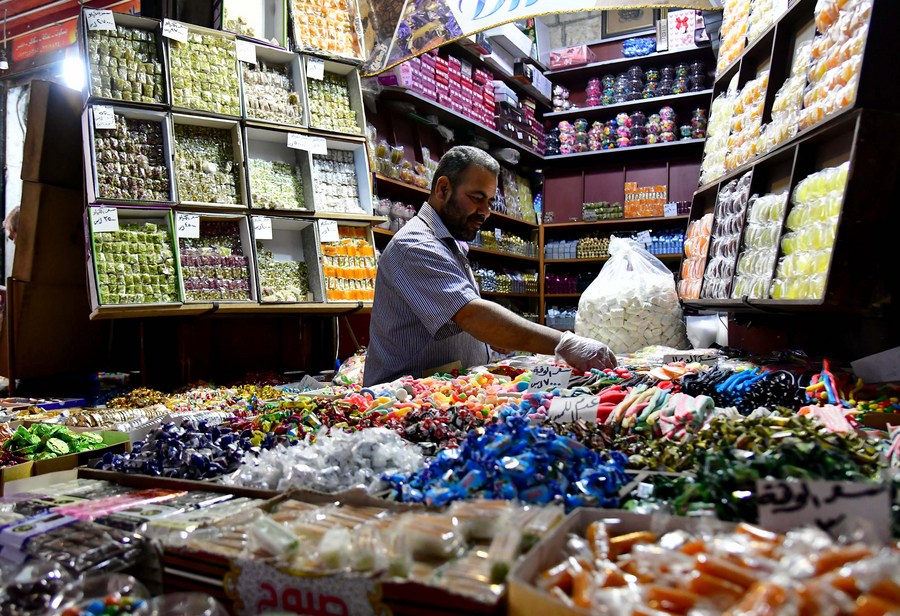 A man sells sweets for the upcoming Eid al-Fitr at a market in Damascus, Syria, April 26, 2022. (Photo by Ammar Safarjalani/Xinhua)

U.S. sanctions on Syria have robbed Syrians of basic needs and aggravated their sufferings, said Ziad Hazaa, general manager of the Syrian Trading Establishment, a Syrian government entity in charge of the distribution of consumer products at affordable prices.

The sanctions, which aim to exert more pressure on Syria, target food and medicine and have made those necessities less accessible, Hazaa said.

He added that transportation and shipping expenses rose significantly and meeting basic demands for Syrians had become more expensive than ever after the imposition of sanctions.

The majority of today's unilateral sanctions, imposed mainly by the U.S.-led Western countries, do not fall within the scope of international law, Alena Douhan, special rapporteur on the negative impact of unilateral coercive measures on the enjoyment of human rights, told Xinhua in an interview.

Facing the financial turmoils caused by the U.S. dollar's hegemony, politicians and experts have realized that de-dollarization is a realistic approach to tackling such problems.

Iran's Supreme Leader Ayatollah Ali Khamenei called in July for a gradual abandonment of the dollar in bilateral trade with Russia. On July 19, the Islamic republic launched the rial-ruble trading in its foreign exchange market.

To circumvent U.S. sanctions, Iranian companies and manufacturers have also begun to try cryptocurrency, the Tehran Times has reported. On Aug. 9, Iran placed its first official import order via cryptocurrency, which has an equivalent value of 10 million U.S. dollars, tweeted Alireza Peymanpak, Iran's deputy minister of industry, mine and trade.

To reduce the impact of the U.S. dollar, negotiations have been underway between Türkiye and Russia on a currency swap agreement that would enable Türkiye to pay Russian oil with rubles and Russian tourists to cover the expenses in Türkiye with rubles. 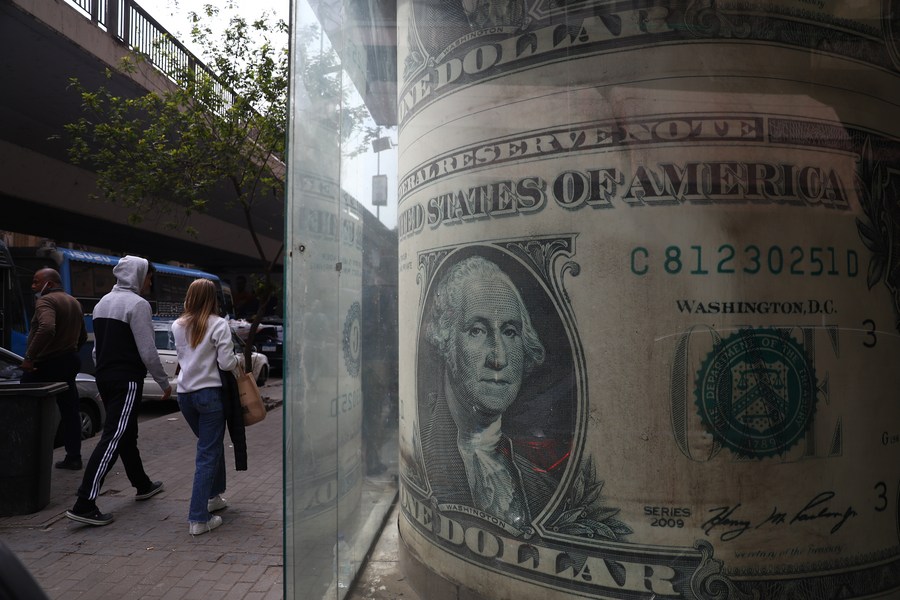 Many countries in the Middle East, in efforts to lessen their reliance on the dollar, have decreased the amount of U.S. debt they hold and started to diversify their foreign exchange reserves.

The Bank of Israel announced in April this year it has added the currencies of Canada, Australia, Japan and China to its foreign exchange reserves, which previously included the U.S. dollar, the British pound and the euro. U.S. dollars account for 61 percent of the country's foreign reserve portfolio, down from 66.5 percent previously.

Egypt's central bank has also maintained a diversified portfolio strategy by purchasing 44 tons of gold in the first quarter of this year, registering a 54-percent increase, according to the World Gold Council.

"Given the U.S. dollar's hegemonic status, it is difficult to find an immediate replacement of the dollar," said Turkish economist Mahfi Egilmez.

"However, the process of eliminating the dollar's influence has started and is gathering momentum," Egilmez added.