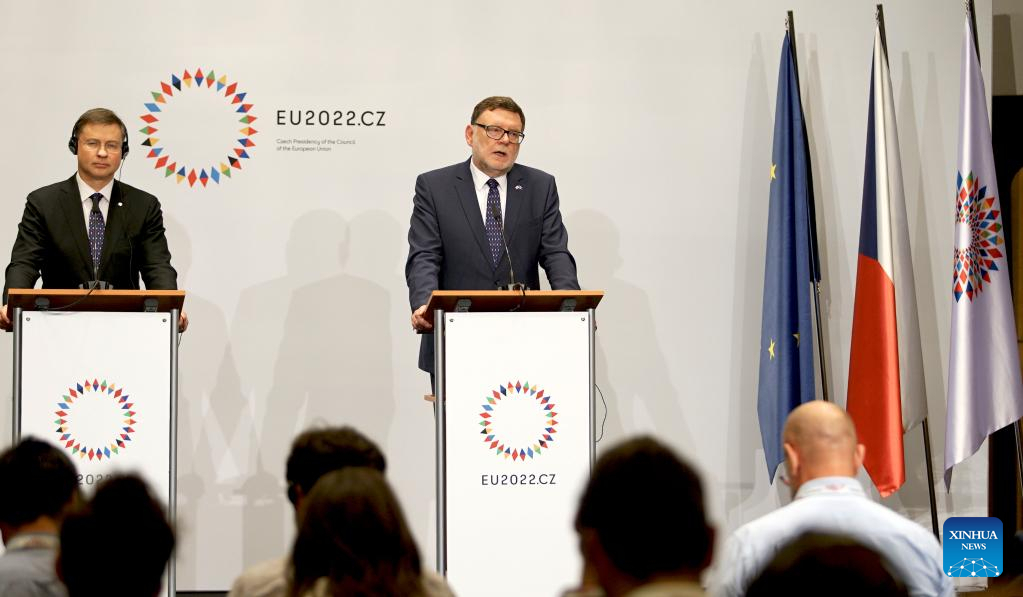 Czech Finance Minister Zbynek Stanjura (R) attends a press conference after the first day of an informal meeting of the EU member states' finance and economy ministers and central bank governors in Prague, the Czech Republic, on Sept. 9, 2022. Finance and economy ministers of the European Union (EU) member states discussed here on Friday ways to protect citizens from high energy prices and financial support for Ukraine. (Photo by Dana Kesnerova/Xinhua)

"The current situation on energy markets requires an immediate EU-wide solution," Czech Finance Minister Zbynek Stanjura said in a statement after the first day of an informal meeting of the member states' ministers and central bank governors.

"Personally, I consider it reasonable to cap prices at European level for electricity from sources other than gas, which generates huge profits -- and also to separate electricity prices from gas prices," he said.

Stanjura said that his country is aiming to present a new set of measures next week, which it expects would work alongside any EU-level solution to be agreed by the member states.

The ministers also discussed the impact of the Russia-Ukraine conflict on the European economies and agreed to support the swift adoption of additional financial assistance to Ukraine to the tune of 5 billion euros (5 billion U.S. dollars), according to the statement.

"The new loan of 5 billion euros will be used for the day-to-day running of the state and to ensure the operation of the country's critical infrastructure, such as offices, schools and hospitals," Stanjura said, adding that he would also push for "a swift agreement on the provision of the remaining 3 billion euros."

The EU has pledged 9 billion euros in assistance for Ukraine. In early August, Ukraine received 1 billion euros of the aid package in two tranches.

The Czech Republic is currently holding the rotating Presidency of the Council of the EU for the second half of this year.