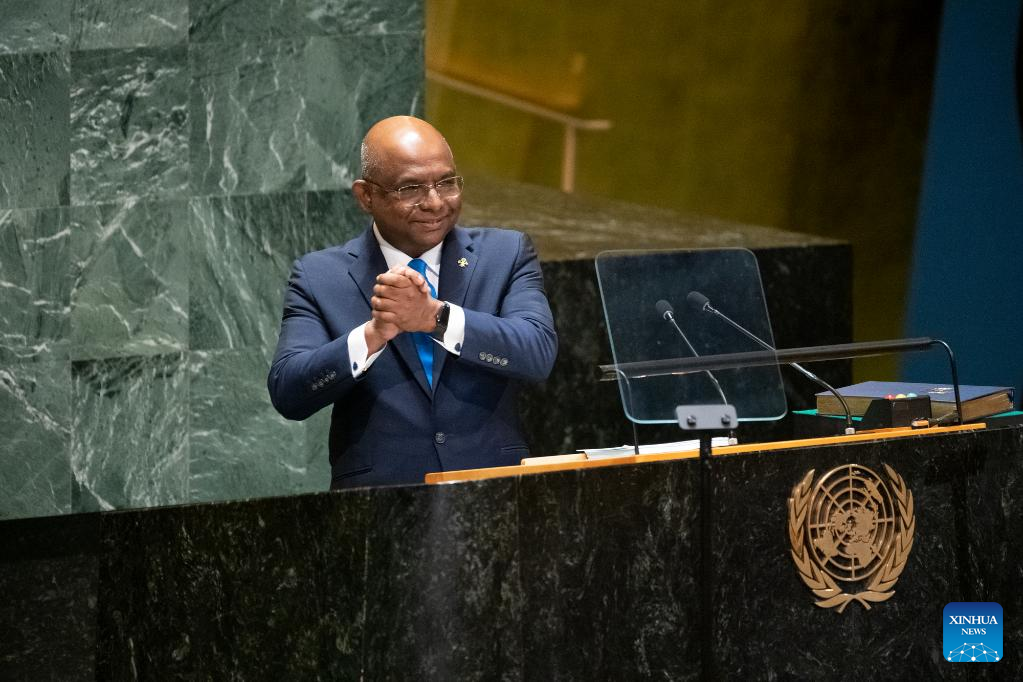 UNITED NATIONS, Sept. 12 (Xinhua) -- The president of the 76th session of the UN General Assembly, Abdulla Shahid of the Maldives, said Monday that hope must live on despite the many challenges facing humanity.

"Today, the 76th session of the General Assembly ends. But hope must live on," he told the closing plenary of the current session of the General Assembly. "It is true that humanity faces challenges more complex and multidimensional than ever before. Solving them will take ambition and perseverance. But guided by our faith in humanity, by our aspirations for a brighter future, by our love for our children and grandchildren, we will succeed -- with courage, with grace, with hope."

Even as countries reopen their borders and return to normal routines, COVID-19 stubbornly lingers. New conflicts are emerging, and old ones persist. Millions across the world are starving and impoverished. A fragile global economy and disrupted food-supply chains add to their burdens and anxieties, said Shahid.

The world is facing a climate emergency. The politics of hate persists even as the world is in desperate need of unity. Migrants, women, minorities, and other marginalized communities look on in despair as their hard-won rights are stripped away. The multilateral system itself is under assault, he noted.

Every crisis feels worse than the last. But the real crisis would be a loss of hope, he warned. "Hope is not blind optimism or blissful ignorance. Hope is acknowledging and affirming our potential. It is about recognizing the wonders humanity is capable of when we are at our best and work together."

"If we can produce and distribute multiple viable COVID-19 vaccines in record time, can we not get everyone vaccinated, repair global supply chains and feed our hungry? If we can launch super telescopes capable of peering into the farthest edges of space and studying distant galaxies, can we not reverse the damage we have done to our own planet? If within a quarter-century, we can make quantum leaps in technology and transform the way we work and communicate, can we not revive and rebuild our economies to be sustainable? If we can avert a third world war, and sustain the current multilateral system for 76 years, can we not amend the UN system where it falls short? Can we not silence the guns, end conflicts, and secure a true and lasting global peace? Of course we can! And it will take hope," he said.

"Let us not lose hope and give into cynicism. Let us not turn our backs on those who look to us at the United Nations for solutions. Let us use the instruments at our disposal to secure global peace and justice. Let us not stand idle and let the world drift to an uncertain future. Let us tell the next generation that their aspirations, their futures, their planet, are worth fighting for. We owe it to ourselves, to our peers, to our children, to our grandchildren, to humanity, to choose hope," he said.

Shahid took stock of the work of the General Assembly under his leadership in the past year.

"Often, the United Nations is criticized for its shortcomings and its inadequacies. Rarely are our wins celebrated. This needs a course correction," said Shahid.