"Ecological protection is our job now," said Zhou Yizhe, a worker of the Bei'an forest farm in the Dahinggan Mountains. In 2015, with a ban on commercial logging in natural forests, workers like Zhou have become rangers employed to cultivate trees.

HOHHOT, Sept. 13 (Xinhua) -- As the autumn harvest approaches, villager Zheng Jie toils beneath the scorching sun, irrigating his hillside vineyard with water pumped from a nearby well that runs over 100 meters deep. The area has been hit by a prolonged drought, causing the grapes to wither somewhat.

Zheng's amur grapes will soon be harvested and sent to local wine-making factories, providing him with about 6,000 yuan (about 870 U.S. dollars) this year. Aged 59, Zheng is also a forest ranger, responsible for patrolling 500 mu (33.33 hectares) of woodland in Ma'anshan Village in north China's Inner Mongolia Autonomous Region.

With its forest coverage rate reaching 90 percent, the village provides a fine example of the integrated ecological efforts being made to protect the beautiful scenery of this grassland-rich region in China's northern border area. 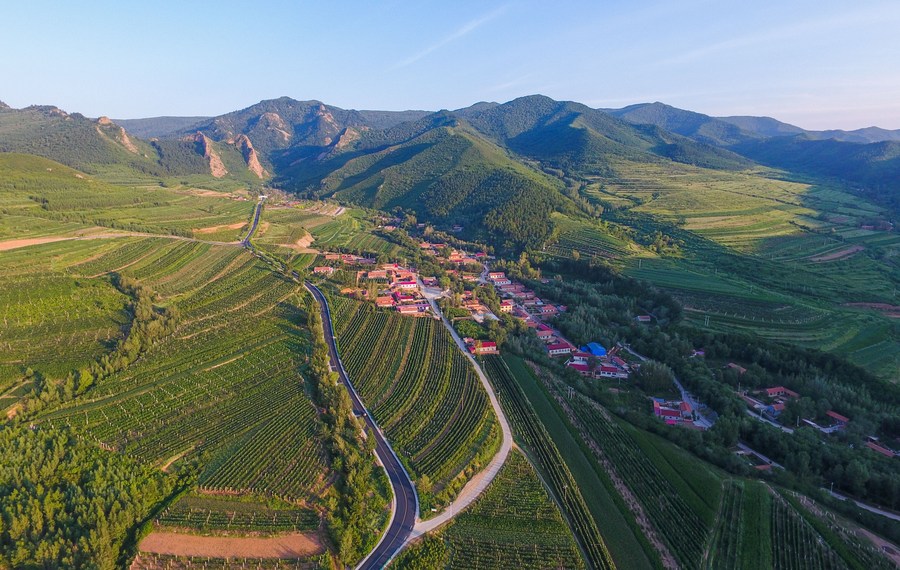 At the hilly Tuhum Township, Horqin Right Wing Front Banner, the grassland is divided into small square grids that form a unique landscape.

"The grids are weed blocks and the grass inside has been grown by artificial seeding," said Burensain, a township law-enforcement official.

Monitoring data shows that the grassland vegetation coverage of the county-equivalent banner increased by 28.67 percentage points from 2016 to 2021.

In the banner's Ulanmod Grassland, scattered flocks of cattle and sheep graze on river banks and hillsides. According to the local grassland-livestock balance policy, 16 mu of grassland is needed to breed one sheep, and 80 mu for one head of cattle. Herders receive a subsidy of nearly four yuan for each mu of their contracted grassland a year. 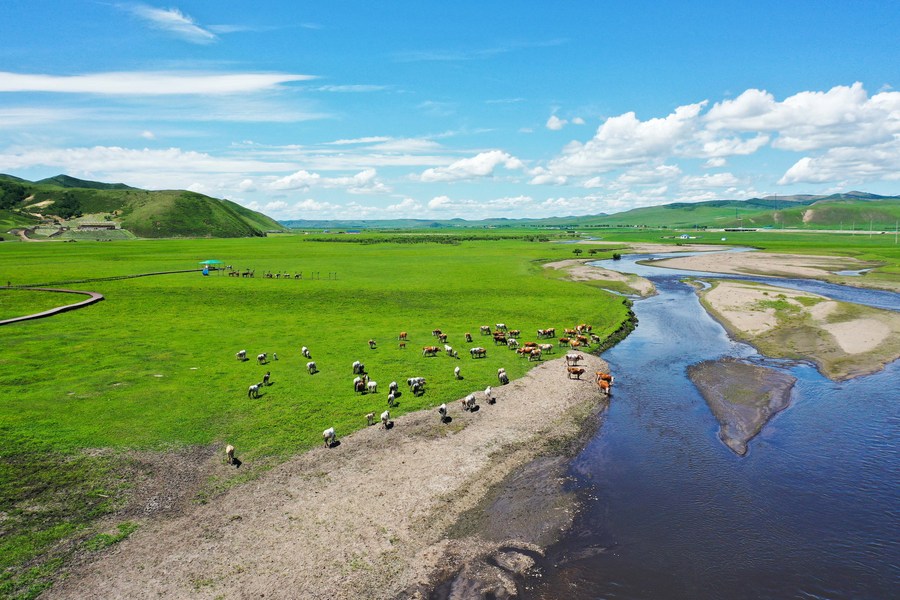 "We have been living here for generations. Only by protecting the grassland well can we have a better life," said Sarengowa.

She raises about 100 head of cattle and nearly 700 sheep on more than 20,000 mu of grassland. The number of livestock is now half what it was in the past.

Hiring two shepherds, she devotes her attention to a newly-opened dairy workshop, covering an area of 330 square meters, in cooperation with four other households.

"We produce traditional dairy products such as milk curd, yogurt and cheese to expand the herdsmen's sources of income," Sarengowa said.

Large swathes of grassland in the region suffered from desertification and salinization due to overgrazing, drought and other factors.

"When spring came, there would be a severe sandstorm lasting several days, leaving sand under the doors and on the windowsills," recalled Bai Jiranbayar, a herder in Hadabuqi Village, Horqin Right Wing Middle Banner.

The village is in the hinterland of the Horqin sandy area, China's second largest sandy area, covering a total of nearly 100 million mu, with over 86 percent in Inner Mongolia and the rest in neighboring provinces. 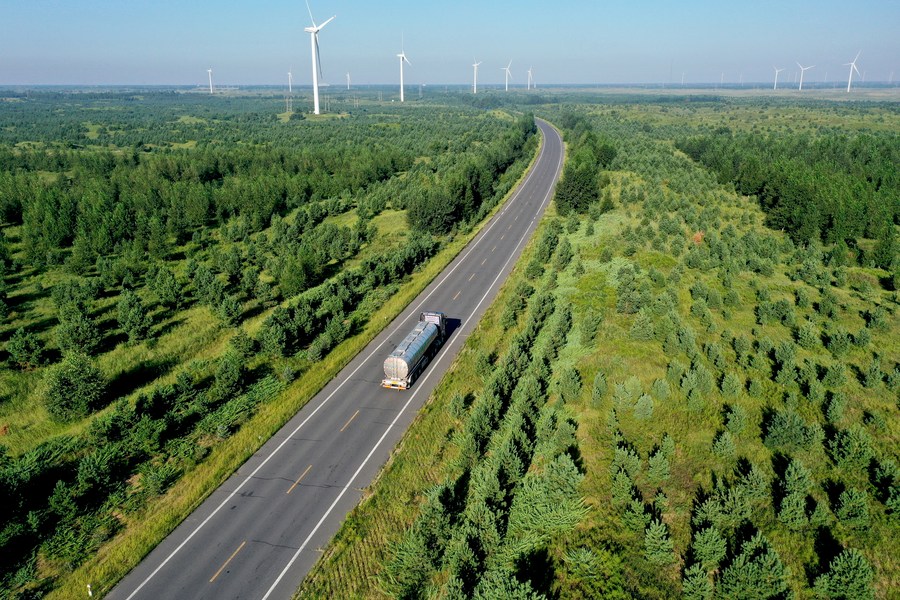 In 2017, the banner implemented a complete ban on grazing. Thanks to a poverty reduction policy, the Bai Jiranbayar family left their shabby clay house and moved into a newly built brick house funded by the government. He began to raise cattle in a shed.

As part of the efforts to restore desertified land, 1,500 mu of sea buckthorn, planted three years ago, has grown as tall as one meter. Bai Jiranbayar is now one of the rangers for the sea buckthorn trees.

In an area near Ulan Suhai Lake, Liu Xiuzhen, a farmer in Sainhudag Village, Urad Front Banner, usually does her morning exercises to the rhythm of music or takes a walk with other women.

"The air is good," said 51-year-old Liu, whose house has been renovated with new furniture and pot plants. Yet a few years ago, the environment was not so livable.

"The environment at the lake has improved a lot, so we decided to renovate the house. Years ago, the environment was so bad that we wanted to move away," she said. Now the water is clear, and there are more fish and birds. 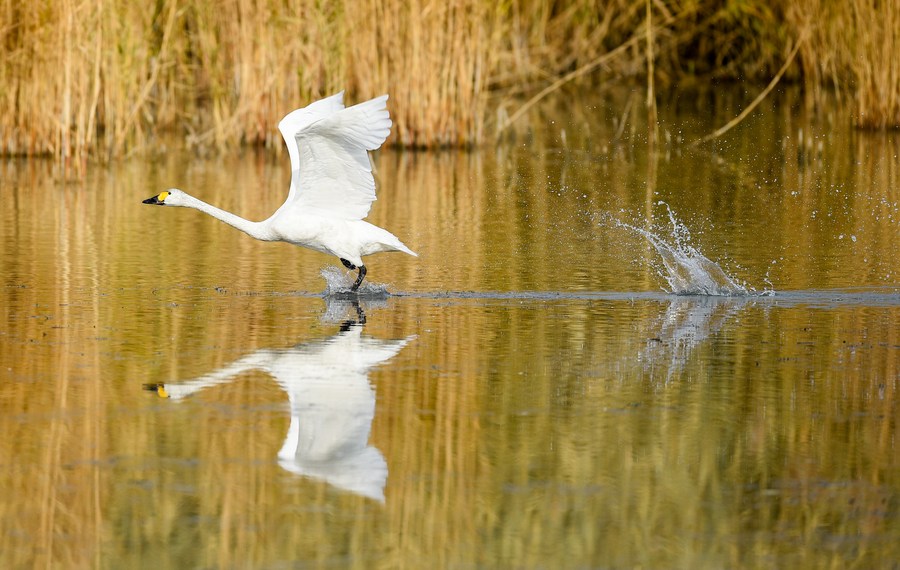 The change is largely the result of the treatment of pollution on farmland around the lake. The excessive use of fertilizers for years was a key factor for the lake pollution.

"We manage the farmland on our own, but the environment belongs to everyone. We must protect our farmland," Liu said.

In her 80-mu farm, Liu changed the crop from corn to wheat, using farmyard manure, artificial weeding and no plastic film, in response to the government measures to reduce agricultural pollution.

She enjoys government subsidies for the adjustments and her wheat has been recognized as a pollution-free product, which sells at a price higher than that of ordinary wheat. With all of these changes, Liu increased her income by 40,000 yuan last year.

"The ecological protection at the Helan Mountain is good. Compared with 20 years ago, the edge of the forest has moved five to 10 meters forward," said Li Dong, an official with the administration bureau of the Inner Mongolia Helan Mountain state-level nature reserve.

"The hills were bare, and heavy rain led to floods, with stones washed down," said the village's former Party chief Zhang Guozhi, recalling the scene from over 10 years before.

The village encouraged residents to plant trees, guaranteeing them an economic return. So far, the village has completed the greening of some 3,000 mu of mountain land. Besides tourism, the locals get an income from mountain products such as hazelnuts, mushrooms and apricots.

The village, with over 1,000 residents, shook off poverty in 2017. Its per capita disposable income reached 15,900 yuan last year.

"We will continue our greening efforts and aim to be a 5A-level scenic area," said Liu Yeyang, the village's current Party chief.

Like Ma'anshan Village, the integration of agriculture and tourism has also been practiced in other rural areas.

In Gaogenyingzi Village, near the urban area of the city of Ulanhot, an old section of riverbed that was used as a garbage dump has been transformed into a water park -- the Shenjunwan ecological experience area. Dozens of villagers work in the scenic area as security guards, cleaners or boat pilots. 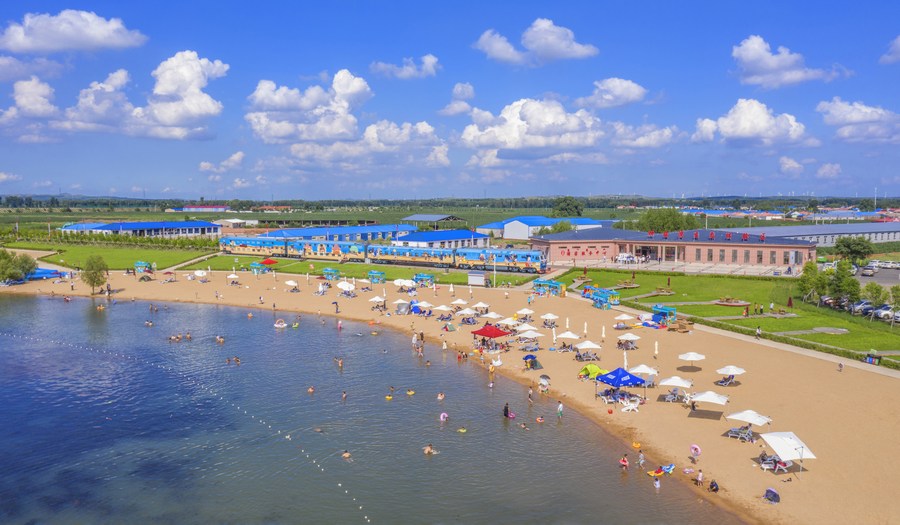 "Several years ago, the site was quite smelly. Who would have thought that an abandoned sand pit would become a 'treasure bowl'?" said Peng Dianqi, a villager who is head of the security staff in the scenic area. He earns 4,500 yuan a month from the job.

"I used to be too poor to eat properly and buy clothes. Now, I can't say that I'm rich, but I'm living a really comfortable life," said Peng, praising the Party for its good policy, which has brought about major changes in his life.

According to managers of the tourist area, new projects will be carried out in future to develop winter tourism and family inns, so that the value of the beautiful area will be further realized.

LIVING OFF THE FORESTS

In the Bei'an forest farm in the Dahinggan Mountains in the city of Genhe, Inner Mongolia, forest rangers are busy digging pits for tree planting next spring.

"Ecological protection is our job now," said Zhou Yizhe, a worker on the forest farm. In 2015, with a ban on commercial logging in natural forests implemented in the area, workers like Zhou have become rangers employed to cultivate trees.

In the city of Arxan, located in the southwest of the Dahinggan Mountains, two-thirds of the local population lives on tourism-related services. 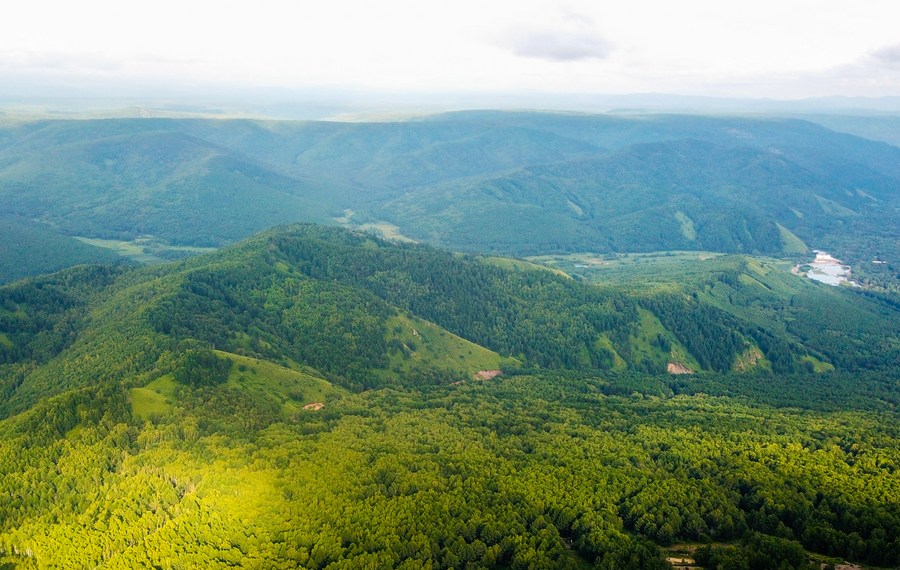 Jiang Huixin, whose father is also a logger-turned ranger, cherishes his job at the Arxan national forest park, where he is in charge of tourist safety and vegetation protection. He teaches his five-year-old son to protect nature when they go outside.

"We still live off the forests, but in a different way. Tourism has developed due to the forests and natural beauty, and life is better," Jiang said.