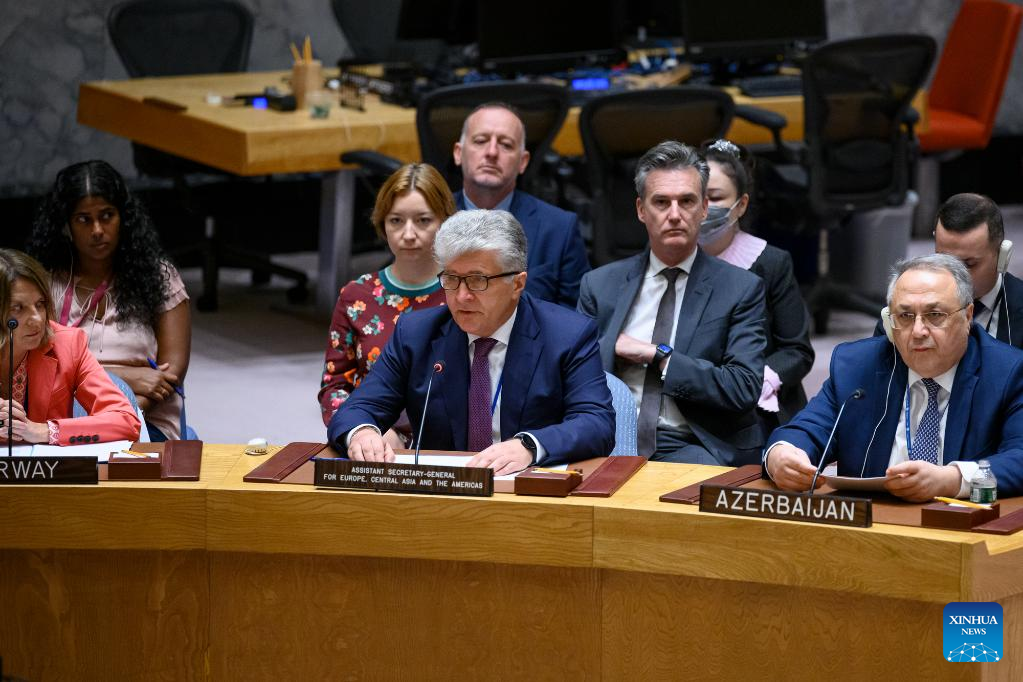 UN assistant secretary-general for Europe, Central Asia and Americas, Miroslav Jenca (C), speaks at a Security Council meeting on tensions between Armenia and Azerbaijan at the UN Headquarters in New York on Sept. 15, 2022. Jenca on Thursday stressed the need for a peaceful settlement of the Armenia-Azerbaijan conflict. (Loey Felipe/UN Photo/Handout via Xinhua)

The international community must remain fully committed to a peaceful settlement between Armenia and Azerbaijan and spare no effort to de-escalate the current tensions, bring the parties back to the negotiating table and help them achieve peace and stability in the region, said Jenca.

In the immediate term, the parties must abide by their obligations to fully implement the November 2020 cease-fire brokered by Russia, he told the Security Council in a briefing.

"We urge them to return to the negotiating table and take steps toward the signing of a lasting peace treaty. It will be important that a similar unified message come from the Security Council for the parties to focus on a diplomatic solution," he said.

On Monday evening, the authorities in Armenia and Azerbaijan reported heavy fighting on their international border. According to reports, heavy artillery, drones and large-caliber weapons were used. The exchange of fire reportedly continued through Tuesday and Wednesday, said Jenca.

On Wednesday evening, it was announced that a cease-fire had been agreed, he said.

Earlier this week, the Armenian Defense Ministry stated that the Azerbaijani side was targeting Armenian military positions, as well as civilian infrastructure, in the Gegharkunik, Vayots Dzor and Syunik regions of the country. Armenia reported 105 of its servicemen killed and six civilians wounded as of Wednesday night, noted Jenca.

While Armenia called the events a deliberate attack, Azerbaijan countered that they were "retaliatory measures" made in response to provocations from Armenia. Azerbaijan, for its part, reported 71 servicemen killed and two civilians wounded, he said.

The United Nations is not in a position to verify or confirm the specifics of these reports, said Jenca. "We remain deeply concerned, however, over this dangerous escalation, including its possible impact on civilians, and have urged the sides to take immediate and concrete steps to de-escalate tensions."

The fighting this week was the latest and the largest in a series of incidents since 2020. It highlights the fact that the process of normalization of relations between Armenia and Azerbaijan continues to encounter serious obstacles. This escalation also underscores the urgent need for the parties to move forward in the ongoing process of delimitation and demarcation within the framework of mutual recognition of their territorial integrity and sovereignty. The United Nations urges the parties to take advantage of this important mechanism as an essential step toward alleviating tensions at the border, said Jenca.

This week's events are also a stark reminder that tensions between Armenia and Azerbaijan also have the potential to destabilize the region. They highlight the need for all actors, in the region and beyond, to act constructively and to press the sides to work for a peaceful settlement, he said. ■ 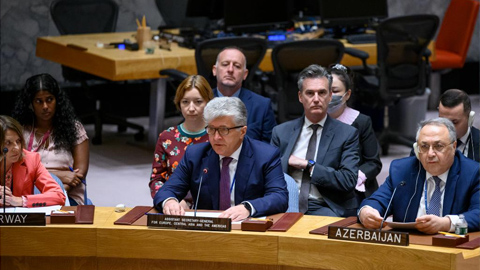