Wang Yi talking about five certainties China can provide during an exchange with representatives of the National Committee on US-China Relations, the US-China Business Council and the US Chamber of Commerce in New York, the United States, Sept. 19, 2022.

State Councilor and Foreign Minister Wang Yi had an exchange with representatives of the National Committee on US-China Relations, the US-China Business Council and the US Chamber of Commerce in New York, the United States, Sept. 19, 2022.

Wang Yi pointed out that this year marks the 50th anniversary of President Richard Nixon’s visit to China and the Shanghai Communiqué. It is an important year to take stock of the past and carry on from a new starting point. But one may find less certainty and more uncertainty in the prospects of China-US relations. In that context, Wang Yi talked about the five certainties China can provide. 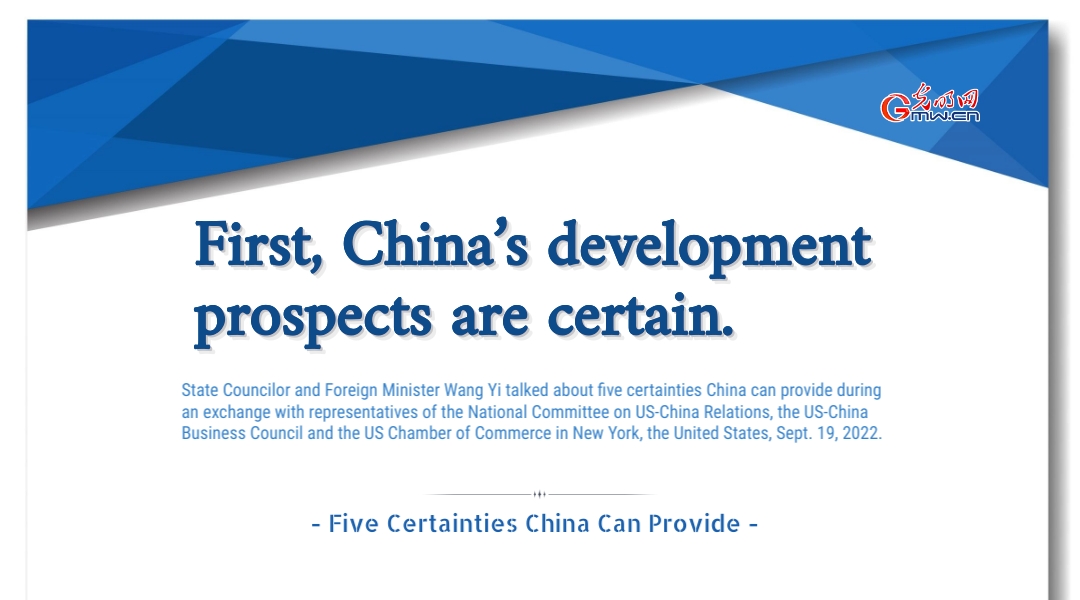 First, China’s development prospects are certain. The upcoming 20th National Congress of the Communist Party of China will lay out the blueprint and the objectives of China’s future development. A modernized China with more than 1.4 billion people approaching common prosperity will create bigger markets and development opportunities for the US and other countries. 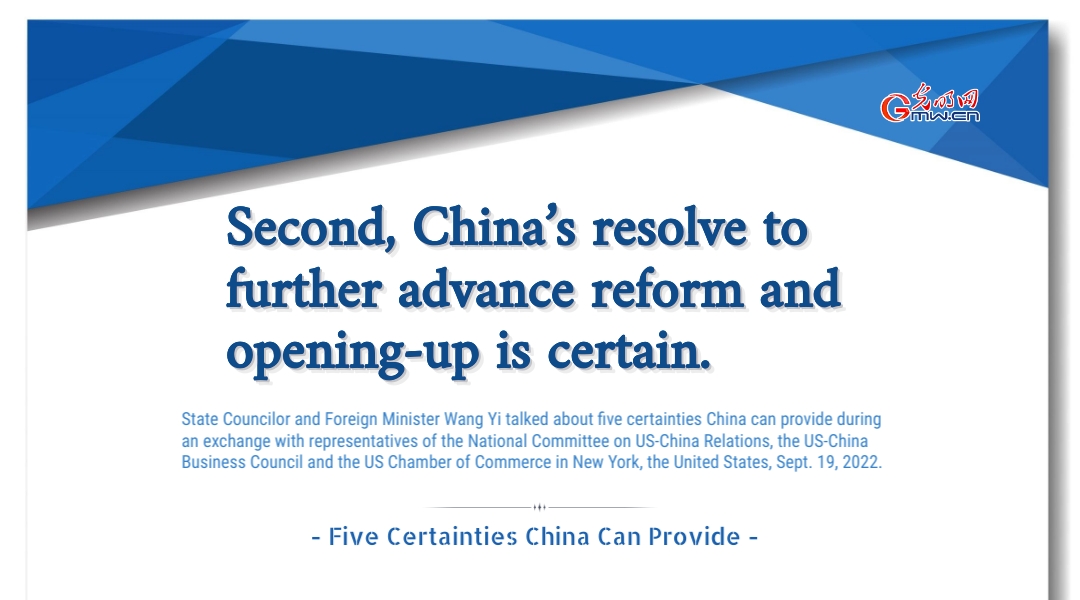 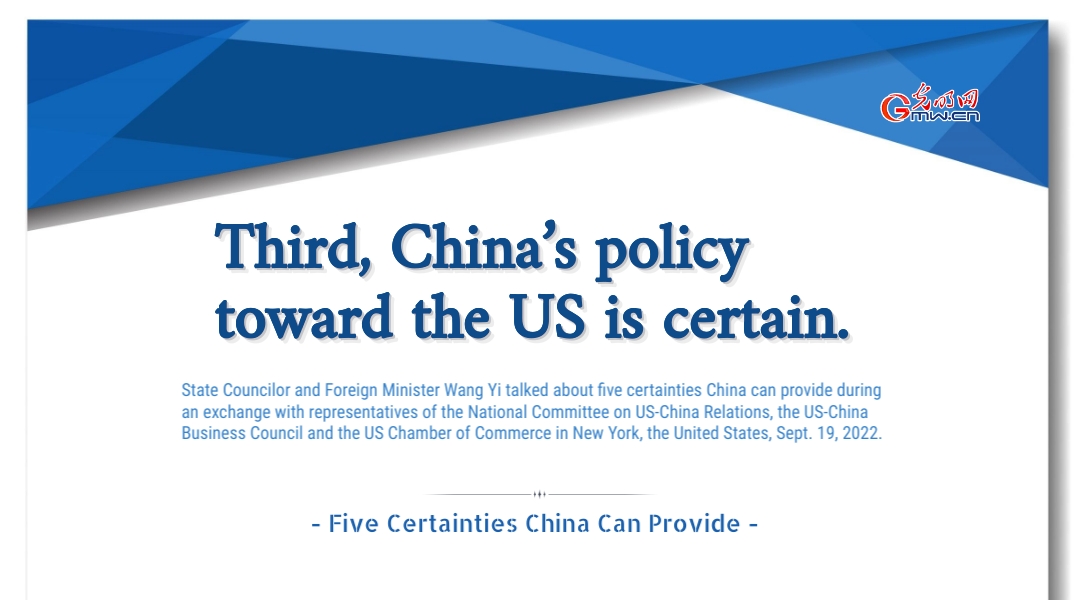 Third, China’s policy toward the US is certain. President Xi Jinping put forward the three principles of mutual respect, peaceful coexistence and win-win cooperation in developing China-US relations. President Joe Biden has reiterated the “five noes” commitment (i.e. the US does not seek a new Cold War with China, that it does not aim to change China’s system, that the revitalization of its alliances is not targeted at China, that it does not support “Taiwan independence”, and that it has no intention to seek a conflict with China) on many occasions. The most critical thing now is for the US to adopt a rational and practical policy toward China sooner rather than later.

Fourth, China’s commitment to closer bilateral trade and economic cooperation is certain. China welcomes US business operations in China and will continue to provide a market-oriented, world-class business environment governed by a sound legal framework. We need to have more, not less, economic and trade interactions between China and the US. We need to “join hands” with each other instead of “letting go” of each other’s hands. We need to remove barriers, not build up walls. We need dialogue and consultation, not confrontation or coercion, when it comes to each other’s concerns. 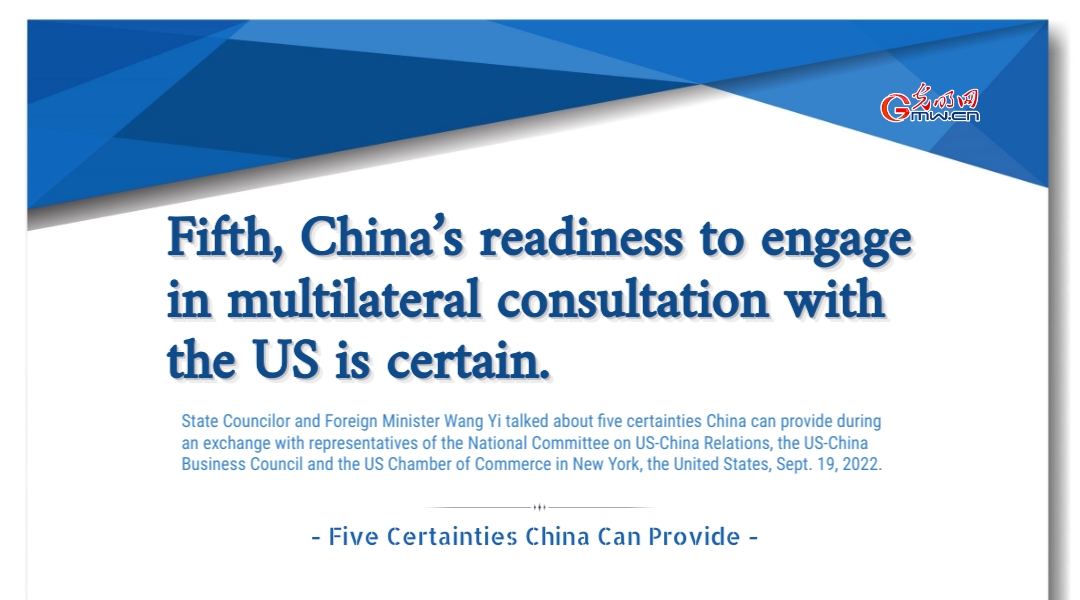 Fifth, China’s readiness to engage in multilateral consultation with the US is certain. History has proven and will continue to prove that when China and the US cooperate, the two sides can accomplish many big things that are good for the two countries and for the world. For that to happen, it is vital to protect the political foundation for China-US relations and in particular, uphold the one-China principle.

Wang Yi stressed that China-US relations bear on the future of the two countries and the peace and stability of the world. The two sides need to work together to find a way for the two major countries with different social systems, histories and cultures to get along.

When meeting with former US Secretary of State Dr. Henry Kissinger, Wang Yi said that this year marks the 50th anniversary of President Richard Nixon’s visit to China and the issuance of the Shanghai Communiqué. China and the US should earnestly take stock of the useful experience in the 50 years of exchanges. China’s policy toward the US remains consistent and stable. The US, out of a wrong perception of China, insists on viewing China as its primary rival and a long-term challenge. Some people even described stories of the success of China-US exchanges as failures. This is a lack of respect for both history and these people themselves. The US needs to adopt a rational and practical policy toward China, return to the right track of the three China-US joint communiqués, and safeguard the political foundation of China-US relations.

Wang Yi stressed that the pressing task is to properly manage the Taiwan question; otherwise, it would have a disruptive impact on China-US relations. A Chinese saying goes to the effect that “To defend even an inch of land, a country will not hesitate to sacrifice thousands of troops.” The saying reflects the will and resolve of the Chinese people. If the Anti-Secession Law is violated, China will surely take firm action in accordance with the law to safeguard national sovereignty and territorial integrity. Wang Yi stressed that to maintain peace and stability across the Taiwan Strait, the US must return to the true meaning of the one-China principle, and unequivocally oppose and curb “Taiwan independence” activities.

The US participants said that as the world’s two largest economies that are interdependent, if China and the US can manage their bilateral relations well, reduce impediments and negative factors and jointly respond to climate change, public health and food and energy security challenges, people of both countries and the world at large will enjoy more benefits. The two sides need to work in a cooperative spirit and in the right direction and keep having constructive and productive dialogues at various levels. Small steps can build into major progress. The level of trust will also grow. This will contribute to world peace, stability and prosperity.

Source: Ministry of Foreign Affairs of the People's Republic of China