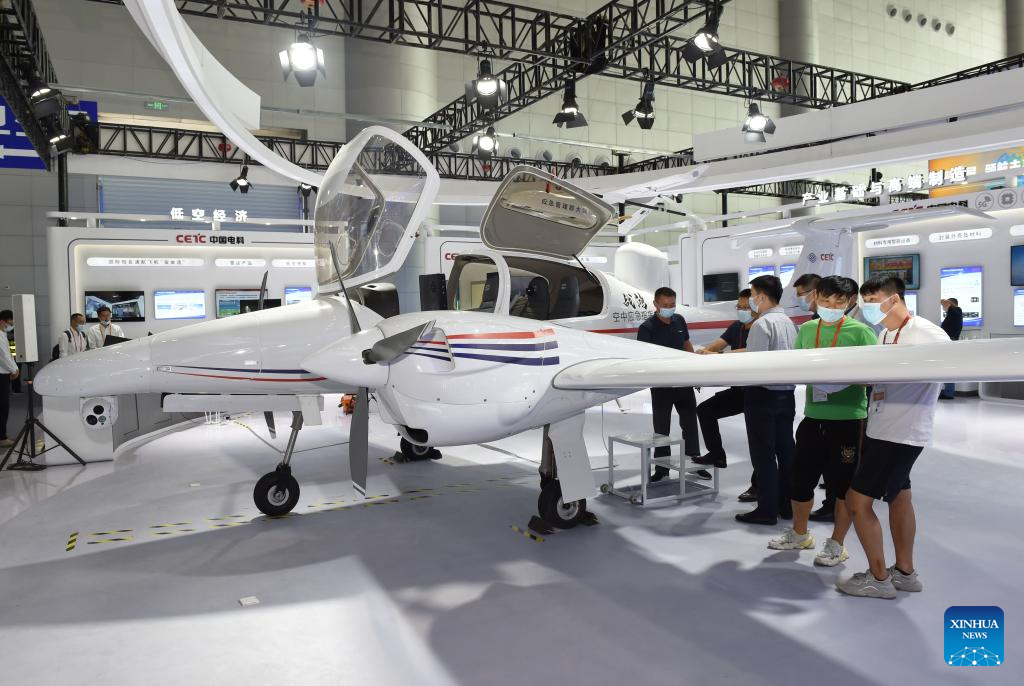 HEFEI, Sept. 21 (Xinhua) -- Among the products exhibited at the ongoing 2022 World Manufacturing Convention, a red unmanned helicopter has caught the attention of many visitors.

The convention opened on Tuesday in Hefei, the capital of Anhui Province in east China. It highlights the latest products, technologies and applications in the manufacturing sector. Themed "Creating a beautiful world through manufacturing," the four-day convention features nearly 40 events, including exhibitions and seminars.

"The unmanned helicopter has a maximum takeoff weight of 600 kilograms and a cruising speed of 120 kilometers per hour," said Yan Jinliang from the Anhui Yingliu Group, the helicopter's manufacturer. "It is designed to carry out missions such as goods delivery in complex terrain, forest fire control and power line patrols."

"Our key component products have been sold to over 100 customers in nearly 40 countries, including the United States, Britain, Germany and the Netherlands, with an export value of about 1.5 billion yuan (215.7 million U.S. dollars) per year," Yan said.

Maintaining the stability of global industrial and supply chains is a vital guarantee for promoting the development of the world economy, and it serves the common interests of all.

China is taking concrete actions to deepen international cooperation on industrial and supply chains and ensure that people of all countries share the fruits of development.

Thousands of kilometers away, the same monorail train is being tested on the Pink Line in Thailand's capital Bangkok, and is expected to be operational next year. In 2017, the company signed a contract with Bangkok to provide 288 monorail train carriages for the city's Yellow and Pink lines. The trains have been designed with driverless technology.

"Compared with the subway, the monorail is quieter, more adaptable and cheaper to build. The construction cost is only one-third of the subway's," said Xu Haida, president of the company, adding that it can greatly ease the city's traffic pressure in an environmentally friendly way.

Established in 2014, the company has an annual production capacity of 200 straddle-type monorails and 100 automated people movers. Its products have been exported to countries such as Thailand, Egypt, Brazil and Singapore.

"The world economy is facing greater downside risks and uncertainties. Holding the World Manufacturing Convention at this critical moment provides the world economy with a platform to deepen exchanges and pursue cooperation," Christian Wulff, global chairman of the Global Alliance of SMEs, said via video at the convention's opening ceremony.

More than 640 enterprises are exhibiting products at the convention, and 568 projects with a total investment of 367.7 billion yuan are expected to be signed during the event, according to the organizer.