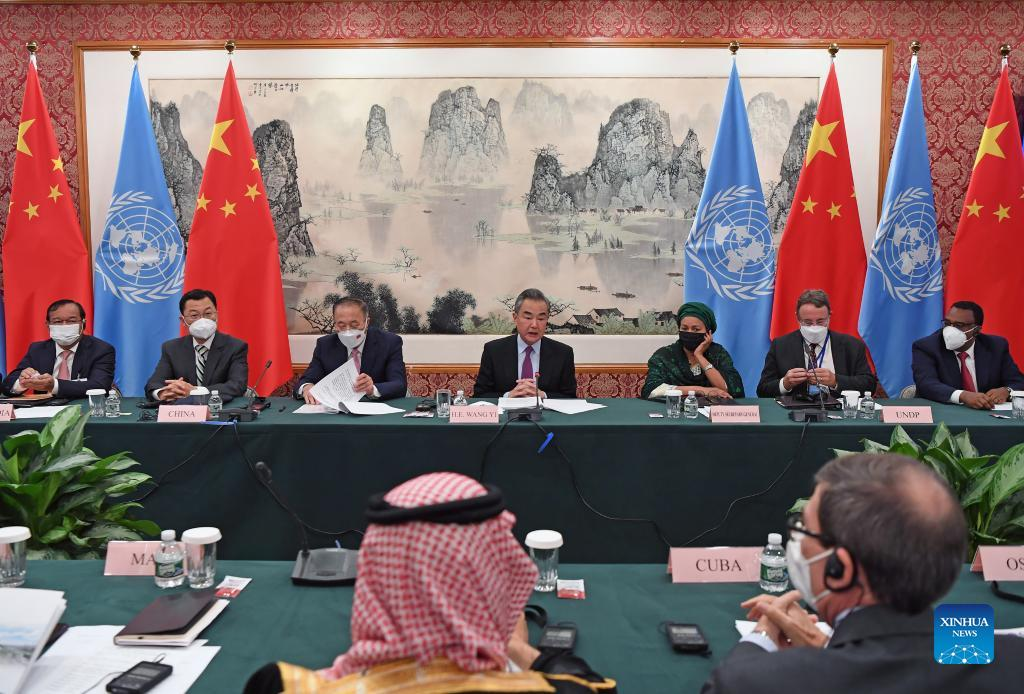 UN Secretary-General Antonio Guterres addressed the meeting via video link, and the meeting was attended by nearly 40 foreign ministers and heads of international agencies.

Wang said ever since Chinese President Xi Jinping put forward the GDI, more than 100 countries and many international organizations including the UN have voiced support for the initiative, and over 60 countries have joined the Group of Friends of the GDI.

The group has become an important force for solidarity, coordination and common development, he said, adding it has also become an effective platform for common consultation on the implementation of the UN's 2030 Agenda for Sustainable Development.

In June, President Xi presided over the High-level Dialogue on Global Development, announced 32 important measures taken by China to implement the GDI, and worked with leaders of other countries to put development back to the center on the international agenda, injecting strong impetus into accelerating the implementation of the 2030 Agenda, Wang said.

He said China is ready to strengthen strategic synergy with UN development agencies, and work with the other countries of the Group of Friends to take seven more steps to implement the 2030 Agenda.

In specific, China and the other countries of the Group of Friends will release a list of the first 50 projects within the pool of GDI projects, which cover such areas as poverty reduction, food security, and industrialization, advance a special action on promoting food production, promote the Global Clean Energy Cooperation Partnership, advance cooperation on "Smart Customs, Smart Borders, Smart Connectivity," initiate a global alliance of digital education, launch the Bamboo as a Substitute for Plastic Initiative jointly with the International Bamboo and Rattan Organization, and announce that China will share data obtained from its satellite SDGSAT-1 launched in November 2021 with the world.

Wang also called on the international community to make joint efforts to advance the GDI, putting forward a three-point proposal in this respect, including to promote greater coordination and efficiency, and strengthen the leading role of the UN development system, to uphold extensive consultation, joint contribution and shared benefits, and pool collective wisdom and strength, and to champion inclusiveness and common progress, and reinvigorate global development partnerships.

China will continue to share development opportunities with countries around the world and achieve common progress for all mankind, Wang said, adding that China will also stand firmly with other developing countries to make every effort to promote the implementation of the GDI and to jointly build a better community with a shared future for mankind.

On behalf of the Chinese government, Wang presented to the UN six sets of data products for global sustainable development, including data on global arable land and forest.

Guterres and participants of the meeting spoke highly of Xi's vision, and welcomed China's 32 practical measures and the release of the first batch of projects within the pool of GDI projects.

They expected that the international community will strengthen solidarity and coordination, uphold multilateralism, focus on the central task of development, achieve economic recovery and inclusive transformation and development, create a fair development environment, and better cope with such common challenges as food and energy security as well as climate change.

After the meeting, representatives of all parties issued press statements to further clarify the paths and principles of promoting the GDI. 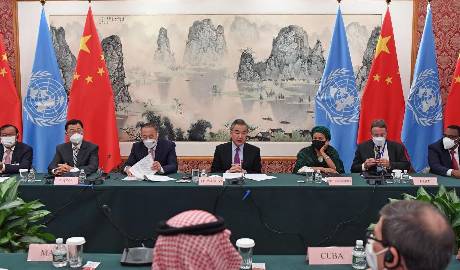