Grasp Theme of the Time, Enlighten the Future with Common Ideals

On September 27, the 2022 China (Qufu) International Confucius Cultural Festival and the 8th Nishan Forum on World Civilizations kicked off in Qufu of China’s Shandong Province. More than 600 experts, scholars, government officials and diplomatic envoys gathered at Mount Nishan either in person or virtually to exchange ideas about inter-civilization communication. The opening ceremony of the 2022 China (Qufu) International Confucius Cultural Festival and the Eighth Nishan Forum on World Civilizations is held in Qufu, Shandong province on Sept 27. （Photo/Dazhong Daily）

Civilizations are colorful because of their diversity, and values are shared because of their universality. The theme of this year’s Forum is “The Diversity of Human Civilizations and the Common Values of Humanity”. Participating experts and scholars focused on the common values of peace, development, equity, justice, democracy, and freedom, and tapped into traditional Chinese ideals such as “amity with neighbors”, “peace among all nations” and “harmony without uniformity”. Through exchanges and mutual appreciation, the event aims at injecting new impetus to human progress. Ye Xiaowen, deputy director of the Committee of Culture, History and Learning of the Chinese People’s Political Consultative Conference (CPPCC) and vice chairman of the organizing committee of the Nishan Forum on World Civilizations, said that after 5,000 years of cultural edification, the Chinese people are both confident and humble, and resilient and inclusive. According to Ye, the fine traditional culture of the country provided the spiritual strength for China to walk steadfastly along the path it independently selected, with greater and more stable strides towards the future. At the same time, China is willing to continue drawing on all beneficial experiences and achievements of human civilizations, hold fast to the common values of peace, development, equity, justice, democracy and freedom, and work with all peoples for a new civilizational renaissance and jointly build a community of shared future for mankind. Chen Lai, president of the Tsinghua Academy of Chinese Learning, vice president of the International Confucian Association and director of the Academic Committee of the Nishan Forum on World Civilizations, said that diversity is the natural form of human civilization, and it maintains the ecological balance of human development. There is no good or bad civilization, nor is there any superior or inferior civilization. Human beings in this era must engage in mutual exchanges and learning and make further contributions to civilizational diversity. In the meantime, according to Chen, diversity and universality are the two sides of a coin, and human beings should pursue commonality while respecting diversity, and bring civilizational diversity in a positive, healthy and bright direction under the premise of maintaining universal values of humanity. In the view of Mohammed Sid, Ethiopian Embassy Minister to China, the concept of “the community of shared future for mankind” is of critical importance to human development, and it will result in greater common prosperity and cultural progress as it advocates closer ties among peoples. 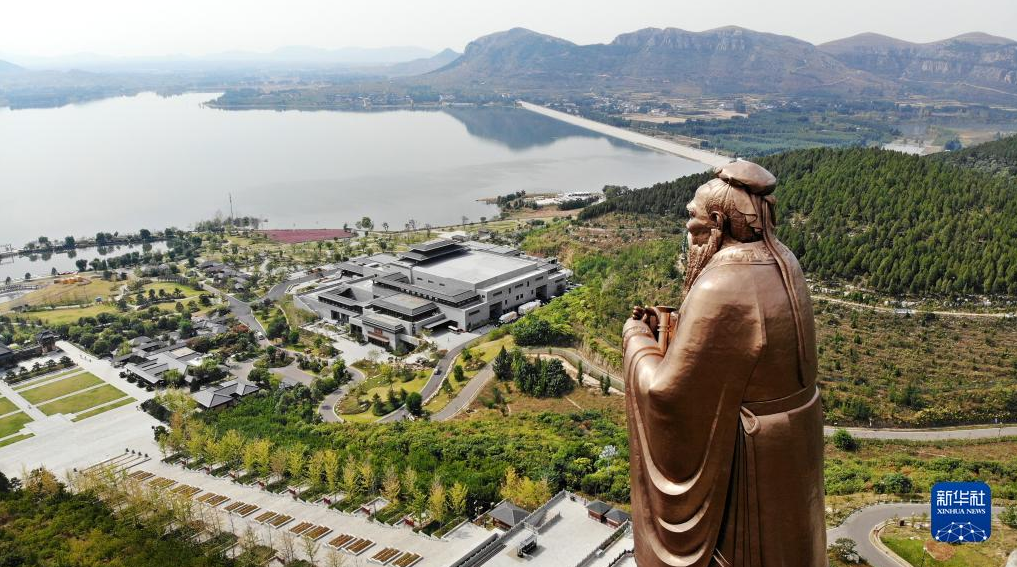 Sublimation of the Humanities Forum

The biggest highlight of the 8th Nishan Forum is the transition from a single academic forum to a series of parallel events on humanities, which broadened the scope of the forum and diversified its formats. This year marks the first time that nine parallel sub-forums are designed, including the Nishan Forum on Cultural Relics, the Art Forum and the Forum of Presidents of Chinese and Foreign Universities. Confucianism has witnessed the continuity of the Chinese culture for thousands of years, Confucian heritage is rich in connotation and profound in value, and its influence transcends time and space. The Nishan Forum on Cultural Relics, which takes the theme of “Preservation and Development of Confucian Cultural Heritage”, has attracted numerous experts and scholars who are dedicated to tapping the potential of Confucianism and integrating it with the present era. “It’s a very fitting forum because without these relics, there is no platform to showcase the fine Chinese traditional culture. The Confucius Temple is a place for commemoration, ritual, and edification, such that we can honor and remember our tradition, and cultivate talents for the future,” said Kong Deli, a professor from the Capital Normal University and a “Taishan Scholar”. What are the implications of fine Chinese traditional culture for the contemporary era? How to engage in innovation while promoting fine traditions? How can young people become spokespersons of the Chinese culture? Featuring discussions about “Civilizational Innovation and Youth Participation”, the Nishan Forum on Global Youth explored approaches that allow fine traditional Chinese culture to guide youth development. According to Guo Jicheng, associate professor of the Institute of Political Science of China University of Political Science and Law, fine traditional culture can serve as a guide for young people, especially for the various problems that they encounter in their lives, such as growth, career development and marriage. If the wisdom of Chinese culture can be brought into play, young people can live a happy, joyful, fulfilling, and meaningful life, then they will consciously fall in love with Chinese traditional culture. The opening ceremony of the 2022 China (Qufu) International Confucius Cultural Festival and the Eighth Nishan Forum on World Civilizations is held in Qufu, Shandong province on Sept 27. （Li Ziheng/Xinhua）

Showing the charm of traditional culture 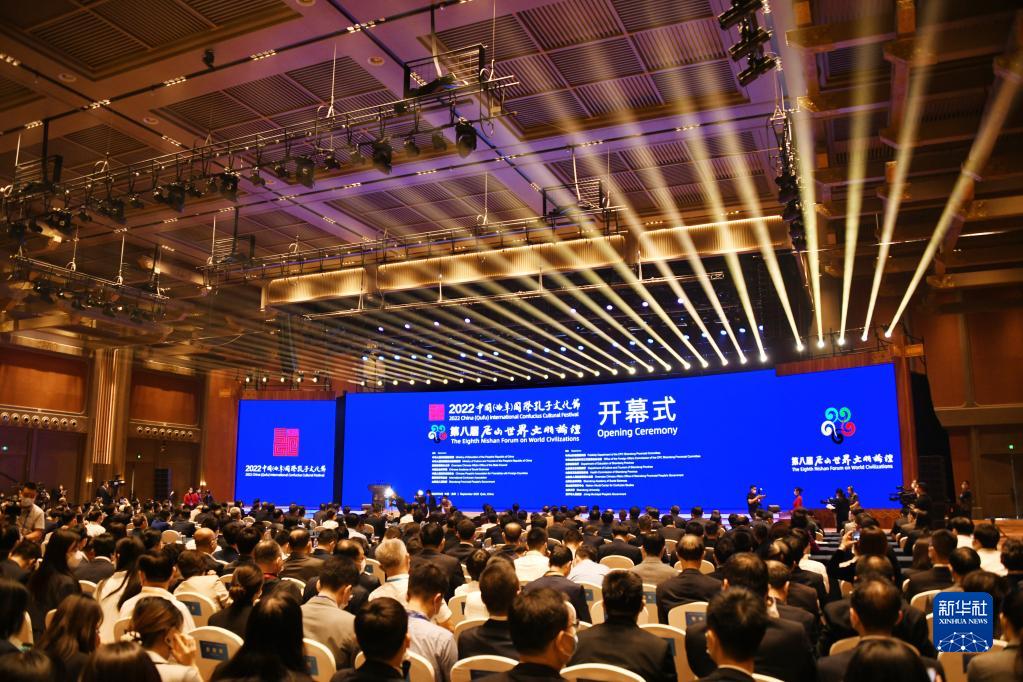 The opening ceremony of the 2022 China (Qufu) International Confucius Cultural Festival and the Eighth Nishan Forum on World Civilizations is held in Qufu, Shandong province on Sept 27. （Li Ziheng/Xinhua）

At the opening ceremony, the organizing committee donated Confucian Classics to 17 recipients, including the Party School of the CPC Central Committee (National Academy of Governance), National Archives of Publications and Culture, China National Library, Peking University, Tsinghua University and Renmin University of China. This is the debut of the collection of classic works of Confucianism complied by Shandong Province. Composed of Confucian literature throughout different dynasties of China, “Confucian Classics” features three major components of scriptures, theories, and biographies, covering a total of 4,789 books of 1,816 volumes, demonstrating the formulation and development of Confucianism, providing the most authoritative and fundamental materials for in-depth study and interpretation of the excellent Chinese traditional culture represented by Confucianism.“Confucian Classics” has supplemented the collection of Chinese classics and offered a reference for Shandong’s “Cultural Inheritance” project. “Confucian Classics presents the most representative existing works of Confucian literature. It showcases the cultural responsibility of the people in Shandong, and is a great step in advocating fine Chinese traditional culture”, said Wang Zhimin, former vice chairman of the Shandong Provincial Committee of CPPCC and a senior professor of Shandong Normal University, at the launch ceremony of the Confucian Classics and Qi-Lu Classics. This year’s forum pays more attention to interactive experience, so participants can feel the essence of Chinese culture in a multi-dimensional way and immerse themselves in the charm of hospitable Shandong. In addition to the launch of the two classics series, more than 30 cultural exhibitions and experience activities were designed, such as the National Calligraphy and Seal Carving Exhibition, the “Confucius and World Thinkers” Light Show, and the Chinese Medicine Live Experience to name but a few. Entering the Traditional Chinese Medicine Experience Hall, visitors are welcomed by the “Key to Civilization” theme wall, which features a red character of “Zhong” (meaning “Chinese”) in the shape of a key. In the exhibition hall, visitors can appreciate up-close the ancient instruments for Chinese medicine. Through the displays and performance of traditional fitness gyms such as Tai Chi, Ba Duan Jin (eight trigrams boxing) and the Five-Animal Exercises, as well as multimedia interaction and expert consultations on site, visitors are brought closer to the unique charm of TCM.

Liu Chuan, director of Shandong Provincial Museum of Traditional Chinese Medicine, said, “The Nishan Forum on World Civilizations is an important platform for the intermingling of civilizations and mutual appreciation of cultures, and Chinese medicine is the key to the treasury of Chinese civilization.”