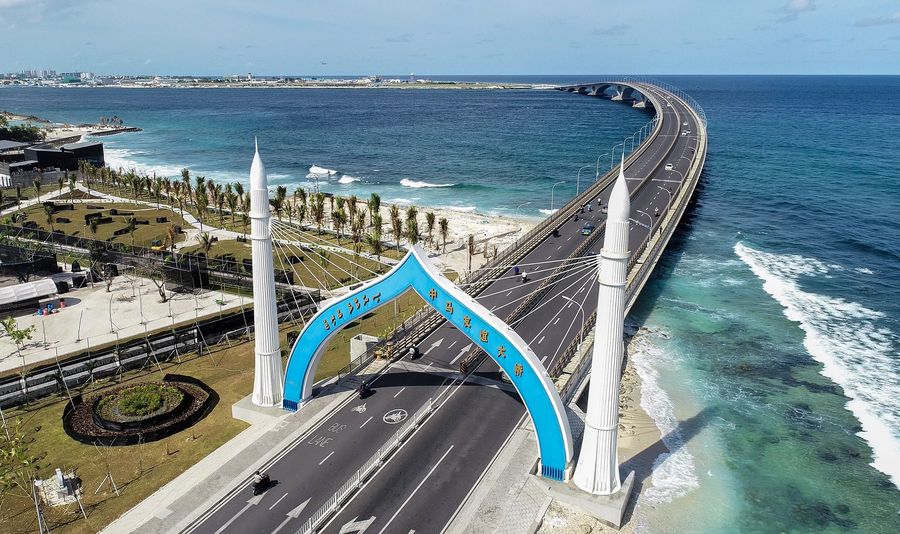 The China-Maldives Friendship Bridge in Maldives on Sept. 1, 2019. (Photo by Wang Mingliang/Xinhua)

With the 20th CPC National Congress around the corner, the Party has gone through 10 extraordinary years under the leadership of Xi Jinping as its core. The past decade has been a glorious one in the past century, characterized by a slew of major achievements. Let me outline some of the great contributions China has made from a global perspective.

The Covid-19 pandemic is still with us, and the socio-economic crisis it caused is deepening. The war in Ukraine has added to the uncertainty of the world, increasingly dividing it into opposing camps, within which countries have some shared interests but are not close allies, rather, they constantly face political, economic and even military confrontation. Against growing tensions, the series of proposals by Chinese President Xi Jinping, particularly the Belt and Road Initiative, the Global Security Initiative and the Global Development Initiative, are important and valuable.

The Belt and Road Initiative (BRI) was proposed by President Xi in 2013 to boost the infrastructure network across the five continents, and drive social, economic, technological and cultural cooperation and exchanges. The BRI is the largest global cooperation project in history aimed at promoting development of China and the rest of the world, and it has had a positive impact on improving the living standards of regions facing severe difficulties, such as Africa, Asia and Latin America. In promoting the initiative, China places full emphasis on voluntary participation, mutual respect, equal consultation, openness and transparency. This is in stark contrast to the approach of the United States and the European Union, where colonialism, discrimination, non-transparency and differential treatment of members have characterized their handling of trade agreements with other countries. To give just one example, under the logic of colonialism, developing local or inter-regional infrastructure was seen as “unprofitable”. On the contrary, infrastructure is the highlight of the BRI, which shows the non-colonial and altruistic nature of China’s initiative. Moreover, apart from projects that directly benefit local people, the BRI encourages participating countries to work together with China to find solutions to real problems, such as addressing the plight of people who live in backwardness and social injustice.

Mankind has entered a new and historic stage. The BRI provides an important reference for addressing global challenges and building a new international order based on the principle of peaceful coexistence. It is worth emphasizing that the initiative was designed from the outset with an emphasis on ecological sustainability and renewable energy, which reflects China’s full respect and responsibility for the environment and sustainable development of the planet.

One of the major crises today is that world peace and security are in jeopardy. The Cold War mentality has resurfaced and as a result countries are increasingly estranged, and those opposing the unipolar global order created since the collapse of the Soviet Union have been subject to various provocations and direct or hidden sanctions by the US-led Western camp. In this context, the Global Security Initiative (GSI) proposed by President Xi at the Boao Forum for Asia in April 2022 is of great significance. One of the objectives of the GSI is to uphold a common, integrated, cooperative and sustainable concept of security, which helps to effectively maintain peace and security of the world by resolving disputes through dialogue and consultation based on multilateralism and the fundamental principles of the UN Charter, and by rejecting double standards and unilateral sanctions.

The GSI calls for taking seriously the legitimate security concerns of all countries in the world, respecting the principles of global security, building a balanced, effective and sustainable security architecture, and opposing attempts to achieve the security of one country at the expense of others. The initiative calls on the international community to strengthen development cooperation and accelerate the implementation of the UN 2030 Agenda for Sustainable Development. The GSI responds to concerns about common global challenges, emphasizing the importance of cooperation in areas such as combating terrorism, tackling climate change, and advancing cyber and biosecurity. It is therefore my view that the GSI is a feasible initiative addressing global concerns, it marks yet another sincere contribution of Chinese wisdom to the world so that we can move away from the current confrontational dynamics that have serious consequences for all of humanity. As such, this Chinese initiative should be widely disseminated around the world and should be recognized by all countries.

In September 2021, President Xi proposed the Global Development Initiative (GDI) at the 76th session of the United Nations General Assembly. The GDI and GSI are inextricably linked. In other words, the GDI can prevent the world from falling back into a state of Cold War. A Cold War inevitably leads to estrangement and antagonism between countries, and trade wars and economic sanctions are a double-edged sword undermining the interests of the sanctioned, but also has serious repercussions for the country that initiated the sanction. The GDI therefore seeks to promote multi-level and cross-sectoral collaboration, foster technological innovation, accelerate technology transfer and knowledge sharing, thereby improves the global governance system with a view to ending colonialism and unequal relations between rich and poor countries, and creating a fairer and more equitable institutional environment. As President Xi put it, we should work together to foster new growth momentums and achieve stronger, greener and healthier global development.

The GDI offers a new model of global governance that centers on peaceful coexistence and shared well-being for humanity. I was impressed by a few lines of President Xi’s speech. He stressed that “history and reality have taught us that the unilateral pursuit of one’s own security at the expense of other countries will only create new contradictions and risks.” He also pointed out that “how a country is doing on human rights is essentially gauged by whether the interests of its people are upheld, and whether they enjoy a growing sense of fulfillment, happiness and security. That is the most important criterion for assessing the human rights conditions of a country.” By the same token, only when people all over the world have a dignified life, can we deem that global security and the human rights of all peoples have been safeguarded.

A brief analysis of the three Chinese proposals mentioned above leads us to conclude that they are Chinese solutions offered by President Xi and the entire Chinese people in the face of the unprecedented challenges the world is experiencing. What’s worth noting is that these initiatives are well aligned with the UN Charter as they all aim to promote world peace and development. Therefore, anyone ignoring, smearing or maliciously misinterpreting China’s proposals should be condemned. The common challenges facing humanity need to be addressed by such global initiatives that are people-centered and development-oriented.

China’s foreign policy led by the CPC has always focused on peace and development. A rapidly growing China is not an aggressive competitor, let alone a new hegemon, but a sincere contributor to a better future of peace and progress for mankind, and a real partner fighting for this goal through equal and mutually beneficial cooperation in the fields of trade and commerce, science and technology, and culture. We must remain soberly aware that a “new Cold War”, once formed, will inevitably hinder countries in building good relations based on equality and freedom, sovereignty and independence, and solidarity, thus endangering the future of all mankind. In this way, China’s proposal for the future development of the international landscape is of paramount importance.