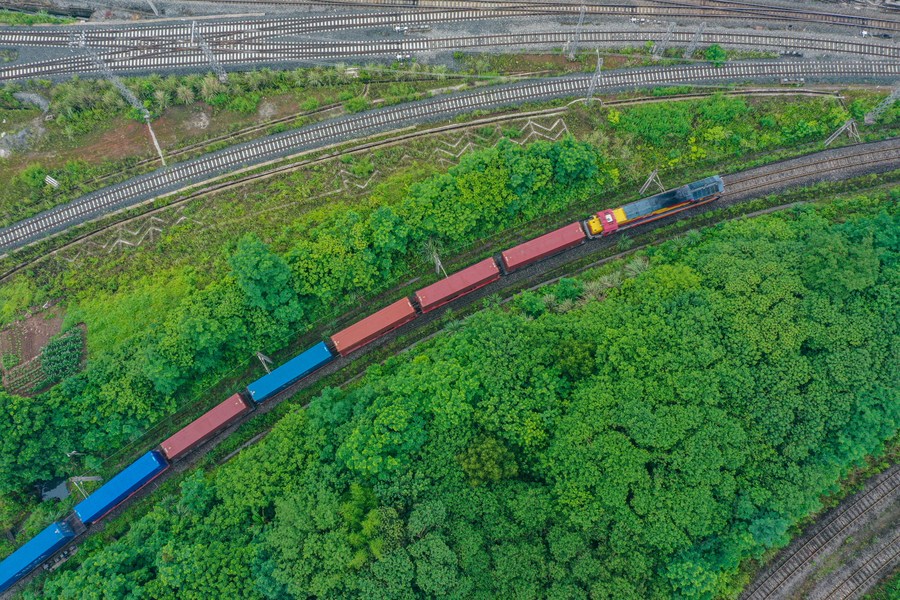 Aerial photo taken on May 21, 2022 shows a China-Laos cargo train departing from a station in southwest China's Chongqing Municipality. (Photo/Xinhua)

The Silk Road constituted an important step for ancient China to reach out to the world, through which Chinese civilization and other civilizations were connected to each other for a long time. This route witnessed thousands of years of trade and human interaction between Asia and Europe. Inheriting and carrying forward the "Silk Road Spirit", China in the new era has creatively proposed the "One Belt, One Road" initiative based on the principle of "common development and sharing". This unprecedented cooperation program is based on the principle of genuine multilateralism, fully respecting the sovereignty, security, development interests and cultural traditions of all countries, and promoting cooperation and integration between different countries and regions of the world in economic, cultural, technological and other fields.

"One Belt, One Road" will lead to more inclusive globalization. In recent years, the West has started a wave of anti-globalization thinking (i.e. against the peculiar Chinese way of interpreting and shaping globalization), intentionally creating trouble, erecting barriers and attempting to obstruct exchanges between the East and West in key scientific and technological areas. This attitude reveals the West's self-righteous perception that "socialist China is rising and the influence of unipolarism on the world is weakening". Some Western observers still have a prejudice against China, believing "when a country gets strong, it will be hegemonic".

But the “Belt and Road Initiative” is the opposite of the arguments that hype up "China threat". The “Belt and Road” is inherently inclusive, and the philosophy and worldview it embodies aspire for harmonious coexistence and interdependence among the peoples of the world, with the ultimate goal of building a community of shared future with all peoples.

No matter how much the West plays up the "China threat", China has always demonstrated to the world its consistent position of maintaining peace, adhering to openness, collaborative development and sharing prosperity. China's development can give a strong impetus to the world's prosperity; in turn, the peace and development of other countries in the world can create a better external environment for China's development. China's "One Belt, One Road" is the promise of the times, the road to win-win outcomes, the promise of China, and the general trend of globalization.

"One Belt, One Road" facilitates the long-term development of developing countries. As soon as the ‘Belt and Road Initiative’ was proposed, it was warmly welcomed and positively responded to by the majority of developing countries. These countries have also become the biggest beneficiaries under the ‘Belt and Road framework’. For example, the Lao people, with the help of Chinese experts and nearly 20,000 skilled workers, have successfully built modern hospitals, schools and power plants, and constructed the Sino-Lao Railway, which stretches for hundreds of miles across mountains and rivers. The friendship railway, which runs from Kunming in China's Yunnan Province to Vientiane in Laos, is more than 1,000 kilometers long, passes through 301 bridges and 167 tunnels, designed to run at a speed of 160 kilometers per hour, and was opened to traffic in December 2021. The railway will bring Laos into the "high-speed railway era" and from now on "turn a land-locked country into a land-connected country", accelerating the economic development of the regions along the railway. What is particularly noteworthy is that during the construction of the Sino-Lao railway, the Chinese technical team paid special attention to environmental protection, avoiding possible negative impacts on the residents and environment along the path at all stages of the process. This will ultimately make the China-Lao Express Rail Link a "brand project" and a "people's project". Laos has not only gained modern infrastructure, but has also learned from China's advanced technology and experience.

"One Belt, One Road" helps developing countries solve their financing problems. According to reports, global infrastructure investment needs amount to $94 trillion. If this trend continues, developing countries will be caught in a deadly cycle of "no money, no construction, no infrastructure, no development opportunities". To help developing countries obtain the necessary funds for the initial stages of development, China has taken the lead in establishing the Asian Infrastructure Investment Bank (AIIB) to promote international financial cooperation through the multilateral system and develop more adaptable and flexible financing solutions. The AIIB, together with the BRICS New Development Bank and the Silk Road Fund, has become a main channel for international investment and financing. In 2018, China Silk Road Fund and the European Investment and Development Bank jointly established the China-EU Common Fund, further improving the systemic construction of international financial cooperation on the "Belt and Road".

Thanks to this, various key projects along the “Belt and Road” have been successfully promoted, such as the Anaklia deep-sea port and the local special economic zone jointly funded by China and Georgia, which is expected to have a cargo throughput capacity of over 100 million tonnes by 2025 and will give a strong boost to the local economy.

In addition to its outstanding contribution to the fight against poverty, at a critical time when the COVID-19 pandemic was raging around the world, the Chinese government coordinated closely with countries along the “Belt and Road” on epidemic prevention mechanisms, shared epidemic prevention information, provided medical supplies and technical equipment to many countries, and sent several medical teams to support epidemic prevention efforts, helping these countries to cope with the challenges of the epidemic. This has helped more countries to see that viruses know no borders and epidemics know no race, and that human beings are a community of shared destiny.

The “Belt and Road Initiative” is undoubtedly a model of South-South cooperation. China is an active force in promoting the economic and social development of developing countries in general and African countries in particular. China-Africa cooperation contributes Chinese knowledge and experience to local development and helps African countries achieve true self-reliance. As the economic benefits of the “Belt and Road” continue to be realized, it will attract more and more developing countries to join it, and the scope of cooperation will continue to expand. Regardless of how the West may dismiss China's positive contribution to development around the world, the “Belt and Road” is undoubtedly a highly regarded example of South-South cooperation.