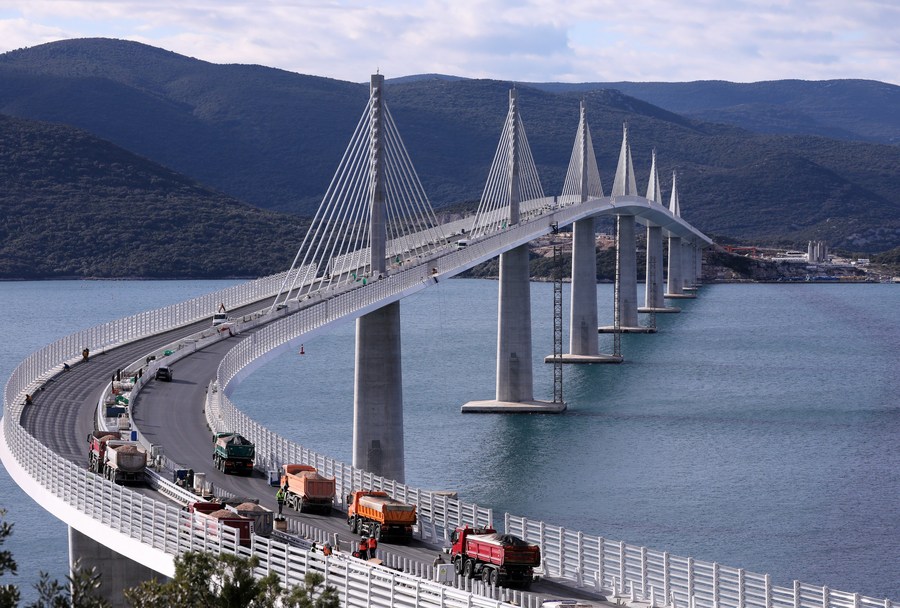 Photo taken on Jan. 21, 2022 shows trucks arriving at the construction site of Peljesac Bridge for its load strains test in Komarna, Croatia. (Ivo Cagalj/PIXSELL via Xinhua)

"Definitely it is a very progressive idea, an idea that starts from the ideal of global peace" and is "very important," especially in today's world, Josipovic said in a recent interview with Xinhua.

Even a small country like Croatia can contribute significantly to this concept, he noted.

"I think that Croatian policies have always been in favor of global peace and global cooperation, so I am completely sure that Croatian leaders will follow this idea. I am sure that our society will be very happy with this project and will contribute to it," he said.

Regarding the concept as a long-term project, the 65-year-old former president said: "It is a visionary project for many years. Definitely, world leaders can contribute to it by having good policies and good cooperation with each other."

Josipovic also appreciates the pursuit and practice of multilateralism by the Chinese government.

Multilateralism is a safeguard for most countries in the world, especially for small ones like Croatia, he said, adding that multilateralism has been a guiding principle for Croatia's foreign policy.

Josipovic, who served as Croatian president from 2010-2015 and has visited China many times, has been advocating friendly relations between Croatia and China and promoting the in-depth development of bilateral ties.

"I hope there will be more opportunities to cooperate with China," he said.

The 2.4-km cable-stayed bridge over the Mali Ston Bay of the Adriatic Sea connects Croatian mainland and the Peljesac Peninsula. The bridge was opened to traffic in July and has greatly facilitated Croatia's traffic.

"The Peljesac Bridge is a very important project for Croatia because it connects the two parts of Croatia divided by sea," Josipovic said, adding that it is very important economically and politically.

Recalling his multiple visits to China, he called China's economic development a miracle.

"China is very successful not only in economy but also in culture, science and sports, etc. I am completely sure that China will continue this incredible development and I wish all the best to China and Chinese friends," he said.