China on right path of development over past decade, no fair observer can ignore 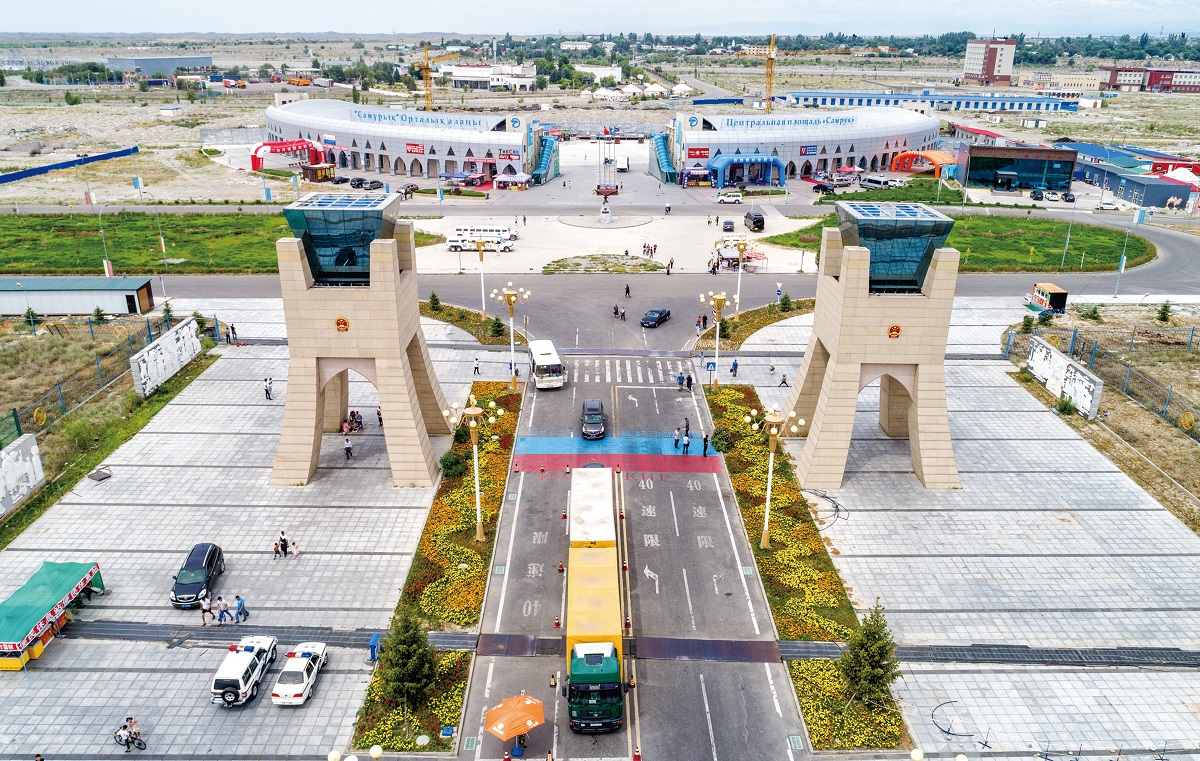 Photo taken in March, 2019 shows the view of the Horgos Port in northwest China's Xinjiang Uygur Autonomous Region. (Photo provided by "Forging Ahead in the New Era" Exhibition)

The 20th National Congress of the Communist Party of China is held at a very critical time, as the world is witnessing many crushing crises. Meanwhile, no observer can ignore what China has witnessed during the previous period, and how the Chinese leadership, represented by President Xi Jinping and the Communist Party of China (CPC) Central Committee, has proven China’s ability to not only overcome its own obstacles, but also to help other countries, especially the developing ones.

The 20th National Congress of the Communist Party of China is a very important event at a very critical moment. The Chinese people and the whole world anticipate the events of the 20th CPC National Congress, which will establish China’s development strategy in the coming five years, how the CPC will manage the international issues and how the CPC will handle China’s internal issues, especially with Chinese people’s growing confidence in the political leadership and the Party thanks to the unprecedented achievements the country has achieved on all fronts in the past 10 years.

The whole world will closely monitor the results of the 20th CPC National Congress, because China is considered the driver of global economic development and the biggest manufacturer in the world. Moreover, China has become an important and essential player in regional and international economic arenas after the policies adopted by the CPC have proven, at home or abroad, very successful in all sectors through the past 10 years. The initiatives proposed by President Xi, including the “Belt and Road Initiative”, the “Global Security Initiative”, the “Global Development Initiative” and a “Community with a Shared Future for Mankind”, have been the launching platform for CPC policies. All these initiatives have turned into effective action plans, not only for China but also for the whole world.

“Belt and Road Initiative”: a “life belt” for many countries around the world

I think China has accomplished many bright and successful partnerships with many countries through the “Belt and Road Initiative”. Among those is Egypt, which has effectively participated in the maritime projects of the initiative through the Suez Canal and the gigantic projects carried out by major Chinese companies in the New Administrative Capital, the New Alamein City and the Suez Economic and Trade Cooperation Zone. All these projects have witnessed big booms in recent years, charting and materializing the China–Egypt comprehensive strategic partnership and the strong ties between President Xi and his Egyptian counterpart Abel Fattah El-Sisi into a concrete reality and cementing the cooperative ties and partnership between the two countries in all sectors.

Despite attempts of many countries, especially the United States, to hurdle China’s progress and to mount pressures on China, the CPC has managed to overcome all these hardships and the prudent Chinese diplomacy has made big strides in enhancing Chinese ties with various countries and addressing all the crises and the controversial issues with excellent professionalism that has benefited the Chinese people and the Party’s vision of balancing foreign relations, in a way that promotes economic partnerships between China and other countries.

Throughout my frequent visits to China’s northwestern Xinjiang Uygur Autonomous Region, specifically Kashgar Prefecture, I could see myself how China has translated its distinguishable strategic relations with Pakistan into a concrete reality of a gigantic economic project that is worth billions of US dollars, including a huge economic corridor connecting China with Pakistan and the whole world under “Belt and Road” cooperation. The “Belt and Road Initiative" takes the huge economic corridor as a launching platform to reach much wider prospects, which let the corridor achieve a lot of economic benefits for both China and Pakistan, making it an important artery for the initiative. That way, the corridor reflects how the CPC cares a lot for implementing Xi’s philosophy implied in the initiative, and proves that this philosophy is for the common good of humanity, not only for China as some claim.

Poverty alleviation led by CPC: a breakthrough the world has never seen

No doubt the huge achievements China has made in all fields during the past 10 years let the Chinese people feel that the CPC carries out effective economic and social policies in all fields, including infrastructure and the unprecedented progress in all the services needed by the Chinese people all over the Chinese provinces. The huge achievements are clearly seen in the services related to the citizens’ daily mobility and transfers that have been greatly facilitated by the huge transportation system and the massive network of roads, the gigantic industrial projects, the great development of telecommunication and information technology industry and the agricultural achievements in various provinces. In Ningxia Hui Autonomous Region, which I visited two times at a lengthy interval, I could see these agricultural achievements myself. In my latest visit, I saw the great progress the agricultural sector in Ningxia has witnessed and how Ningxia has turned into a region of an important economic attraction for many countries, especially the Arab and Muslim ones. Thus, the very simple life of people in rural Xinjiang has turned into a productive, developed one. Citizens there are now proud of the achievements made in just a few years and the great work carried out by the central government in cooperation and coordination with the provincial officials and Party committees that keep real and effective contact with people.

The outstanding experience of the Communist Party of China in addressing and eradicating poverty in all provinces and regions of the country will definitely be an example inspiring many countries all over the world. They will get inspired by the soul of the Chinese model in eradicating poverty, draw on the mechanisms utilized by the Chinese government that applied President Xi’s vision that the Chinese people should think of themselves as the key to tackling the shortage in funds and raw materials, which acted as a fundamental turning point in addressing the poverty issue, as Chinese citizens have shouldered responsibility towards their country and become real participants in tackling problems. Thus, the joint work of Chinese people and provincial Party officials has led to fulfilling what Xi has promised in 2015 concerning eradicating poverty in 2020, a year before the 100th anniversary of founding the CPC in 2021, as the people’s livelihoods have radically improved in China. The per capita income in Chinese rural areas has risen from 6,079 yuan (1 US dollar is equal to 7.12 yuan) in 2013 to 12,588 yuan in 2020, a breakthrough the world has never seen.

No fair observer would speak of the meetings of the 20th CPC National Congress without referring to the unprecedented progress that Xinjiang Uygur Autonomous Region has witnessed concerning the improved services and raised standards of living in all its counties. I have visited the beautiful Xinjiang three times and I have seen the achievements in infrastructure, health, education, agriculture and industry, in all parts of the region, including Urumqi, Kashgar, Aksu and others. I have interacted with ordinary local residents on Xinjiang streets, visited the Islamic Center and some mosques and cultural centers in Urumqi, and I could feel the harmony among different ethnic groups in Xinjiang, where the Uygur, Han, Ozbek, Tatar, Tajik and other ethnic groups live together without any discrimination, to the extent that you can never distinguish them in various work places.

The great progress Xinjiang has witnessed in living standards, placing the region on the right path of development during the past 10 years and even making Xinjiang the main starting point for the “Belt and Road Initiative” to the whole world , all confirm that the development of human rights in Xinjiang ranks on top of the CPC’s priorities ,and that the ordinary people are fully aware of the efforts made in that context and the complete coordination between the CPC Central Committee and the provincial Party committee to promote and enhance human rights in their correct and sound concept.

I deeply believe that the meetings of the 20th CPC National Congress will have great positive effects on both China’s internal development and global governance, and I am sure China will continue its opening-up policy and establishing win-win partnerships.