China in a Decade: Enhancement of Overall National Strength with Rising Global Influences

Since the 18th National Congress of the CPC, in the face of the changing international situation, the sudden outbreak of the Covid-19 pandemic, and the deep recession of the world economy, the Party Central Committee with Comrade Xi Jinping at its core has coordinated China’s response to the unprecedented changes of the world and led the whole Party and Chinese of all ethnicities to forge ahead towards the rejuvenation of the Chinese nation. China has made historic achievement in social and economic development, its position as a major economic power has consolidated, per capita GDP has risen to a new high, people’s living standards have dramatically improved, and China’s overall national strength has been enhanced with a rising global influence.

I.High economic growth with main indicators ranking among the top in the world 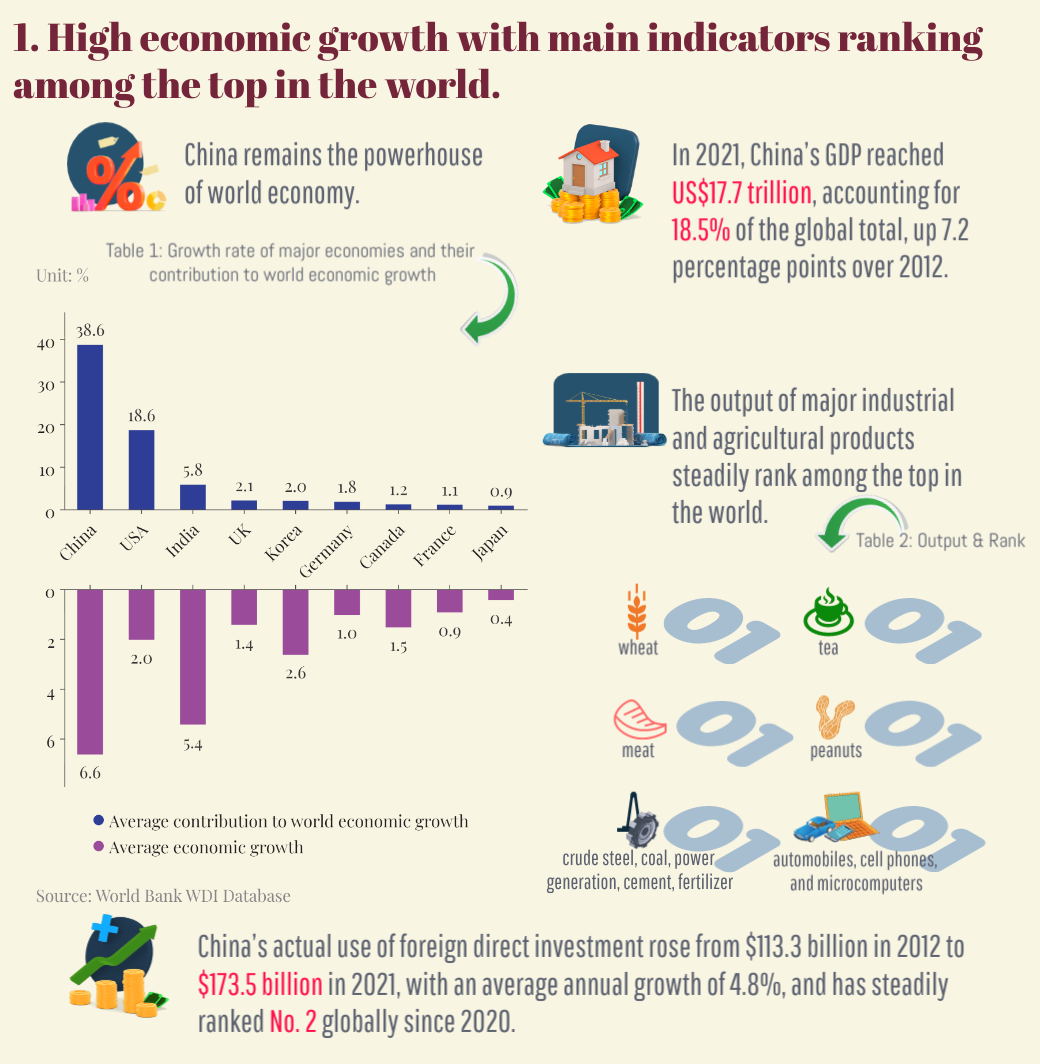 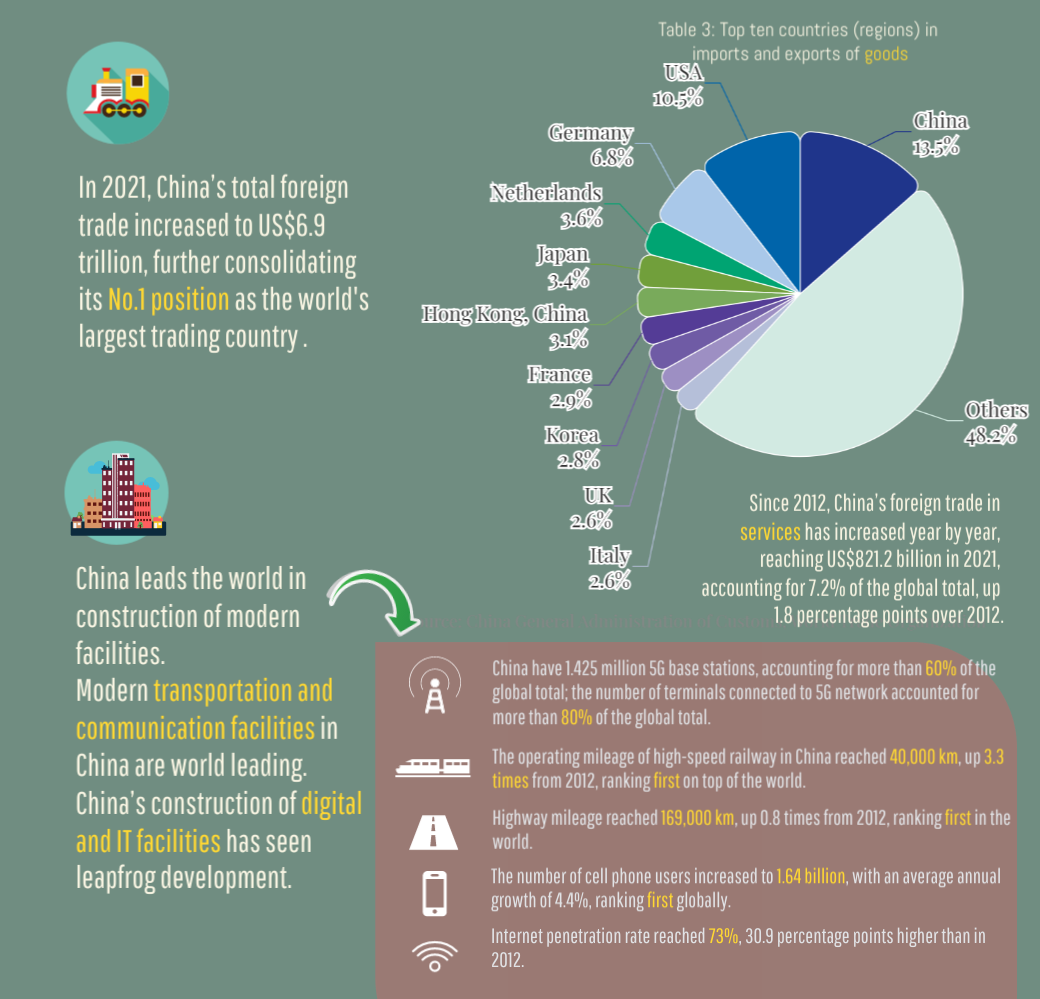 3. The output of major industrial and agricultural products steadily rank among the top in the world

5. China’s utilization of FDI is among the highest in the world

6. China leads the world in construction of modern facilities

Modern transportation and communication facilities in China are world leading.

The operating mileage of high-speed railway in China reached 40,000 km, up 3.3 times from 2012, ranking first on top of the world.

China’s construction of digital and IT facilities has seen leapfrog development.

The number of cell phone users increased from 1.11 billion in 2012 to 1.64 billion, with an average annual growth of 4.4%, ranking first globally.

II.Significant improvement of per capita income and main livelihood indicators 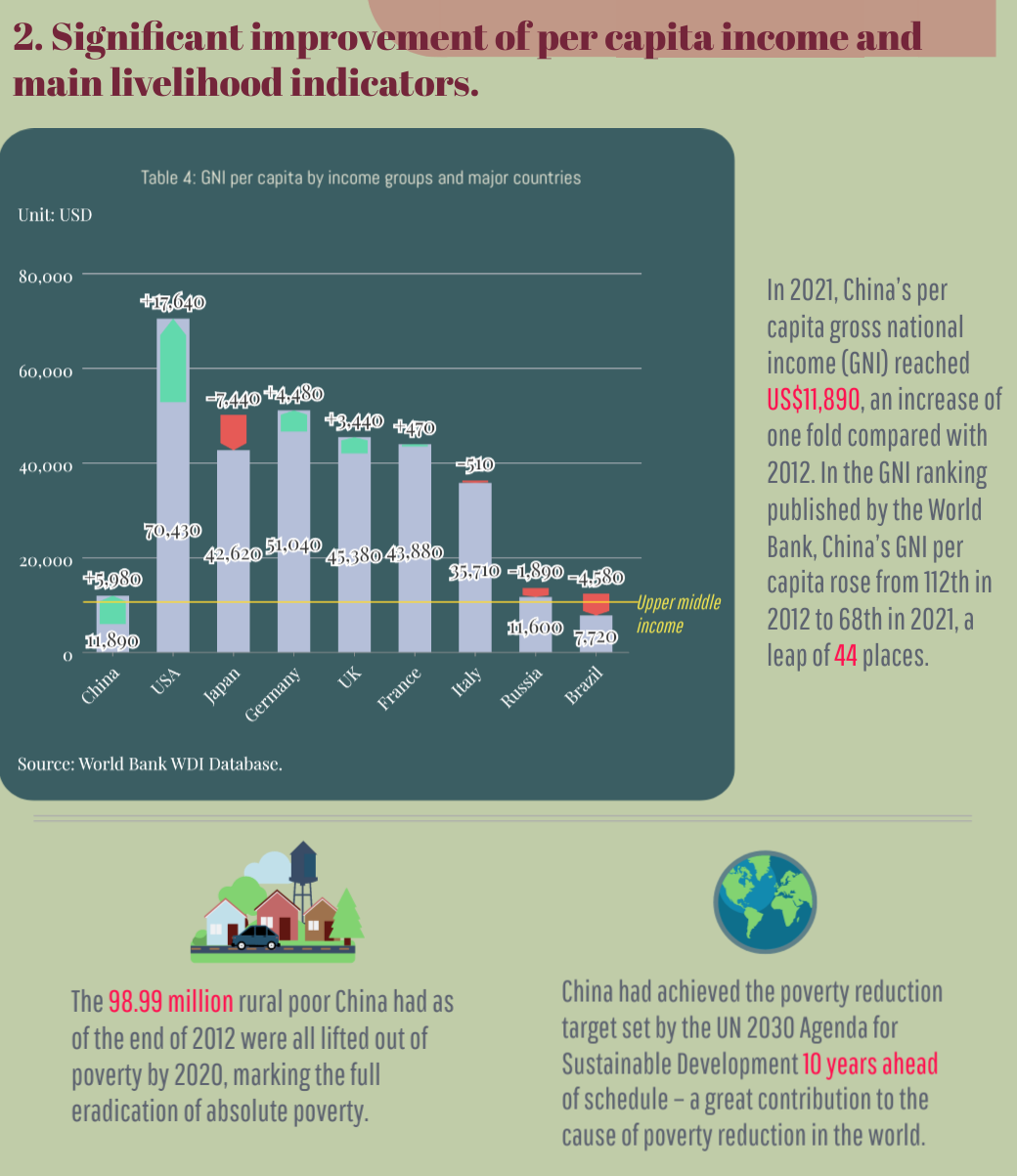 1. New leap in per capita GNI

The 98.99 million rural poor China had as of the end of 2012 were all lifted out of poverty by 2020, marking the full eradication of absolute poverty. China had achieved the poverty reduction target set by the UN 2030 Agenda for Sustainable Development 10 years ahead of schedule – a great contribution to the cause of poverty reduction in the world.

III.China’s innovation capacity and global competitiveness have been significantly enhanced 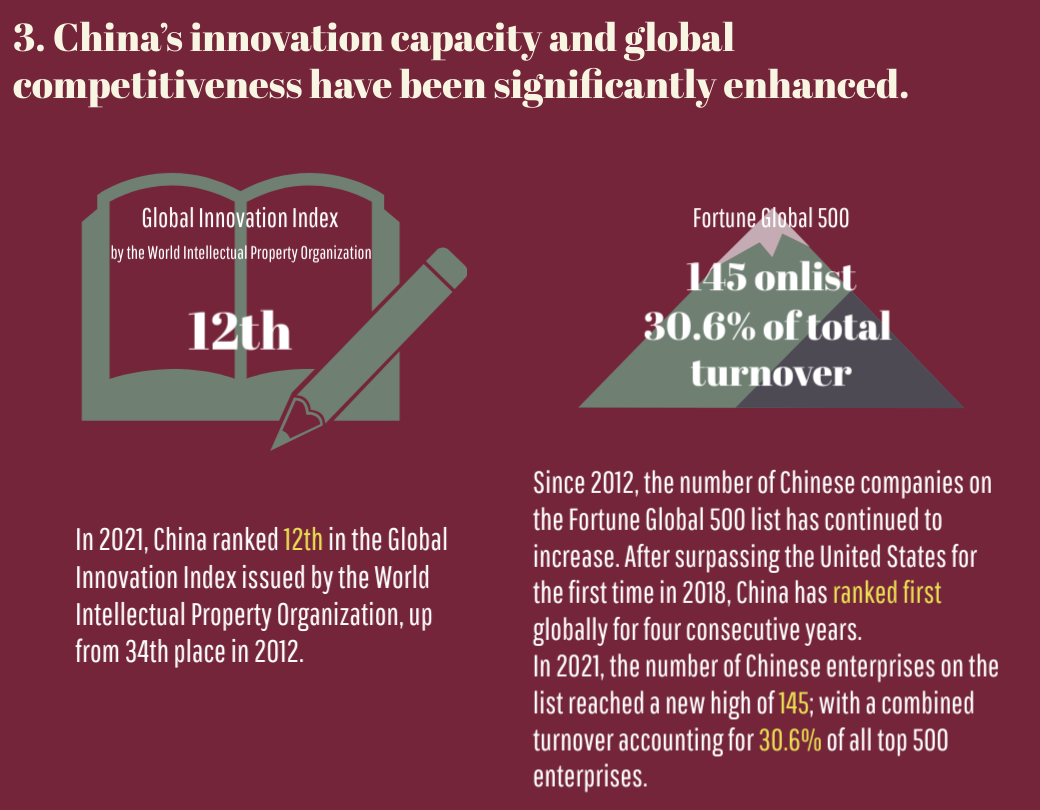 In 2021, China ranked 12th in the Global Innovation Index issued by the World Intellectual Property Organization, up from the 34th place in 2012.

The number of enterprises listed in the World Top 500 ranks on top of the world.

2. The number of enterprises listed in the World Top 500 ranks on top of the world

Since 2012, the number of Chinese companies on the Fortune Global 500 list has continued to increase. After surpassing the United States for the first time in 2018, China has ranked first globally for four consecutive years.

In 2021, the number of Chinese enterprises on the list reached a new high of 145; with a combined turnover accounting for 30.6% of all top 500 enterprises.