Since the “Belt and Road Initiative” (BRI) was launched, under the strong leadership of the CPC Central Committee with Comrade Xi Jinping at its core, China has promoted quality growth, built a new development pattern, and advanced the BRI under the principle of extensive consultation, wide contribution, and shared benefit. The BRI focuses on building interconnected infrastructures, improving existing rules and standards, and deepening people-to-people exchanges with a view to achieving quality growth and yielding tangible benefit to participating countries. 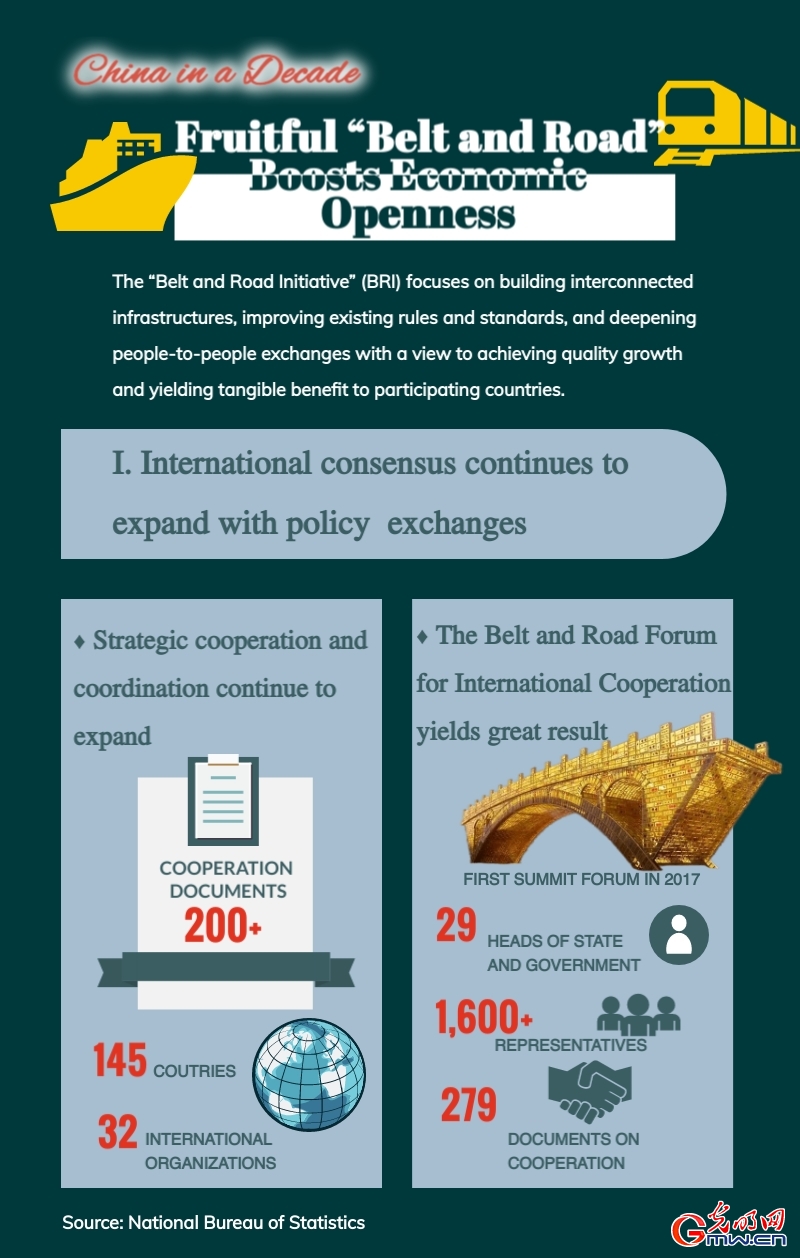 I. International consensus continues to expand with policy exchanges

Policy exchanges serve as the trailblazer of BRI actions. Since the initiative was introduced, China has deepened coordination and communication with relevant countries and international organizations, winning wide support globally.

The BRI has received positive responses from more and more countries and international organizations and become a popular public product and cooperation platform in the world. As of end 2021, China had signed more than 200 cooperation documents with 145 countries and 32 international organizations under the BRI framework, covering investment, trade, finance, science and technology, people-to-people exchanges, livelihood and other fields.

Under the principle of extensive consultation, wide contribution and shared benefit, the Belt and Road Forum for International Cooperation has become the highest platform for global cooperation.

The first Summit Forum attracted 29 heads of state and government, more than 1,600 representatives from more than 140 countries and over 80 international organizations, yielding 279 documents on cooperation in 5 categories.

Infrastructure is the cornerstone of interconnection, and a key BRI priority.

The China-Pakistan Economic Corridor (CPEC) is the flagship project of the BRI, which was one of the earliest projects and has proceeded fast. Today, all 22 priority projects in the first phase have been completed, generating about 38,000 jobs, more than 75% of which are local jobs, including 16,000 Pakistani workers and engineers in energy projects and 13,000 jobs in transportation infrastructure construction. Since 2021, the CPEC has entered its second phase, unleashing greater opportunities for bilateral cooperation in multiple fields.

2. Infrastructure projects are implemented in an orderly manner

Focusing on the main structure of “Six Corridors, Six Roads, and Multiple Ports in Multiple Countries”, some landmark projects have made substantial progress: China-Laos Railway is in operation, and construction of Jakarta-Bandung High-Speed Railway and China-Thailand Railway is progressing steadily. The two major highways of the CPEC have come into operation, and the Sino-Russian Black River Bridge been completed. At the end of 2021, China had signed air transport agreements with 100 countries and maintained regular flights with 54 of them, at the same time, regional air transport agreements were signed with ASEAN and EU.

As an important channel of interconnection between China and “Belt and Road” countries, the role of the China-Europe Express Train has been further highlighted. As of the end of January 2022, over 50,000 trains had been dispatched, carrying more than 4.55 million TEUs of goods worth $240 billion, reaching 180 cities in 23 European countries, making a positive contribution to the quality growth of the BRI. 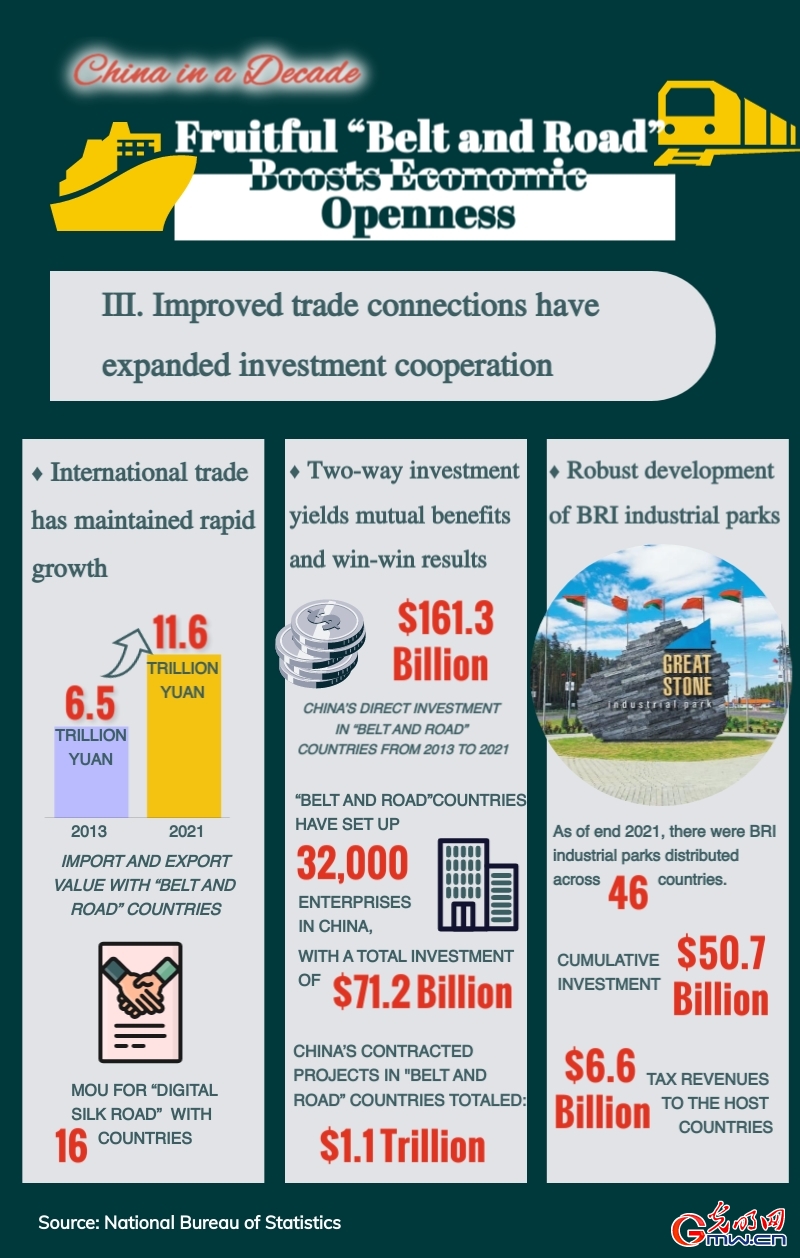 Smooth flow of trade is the focus of the BRI and an important driver of sustainable economic growth. Over the past eight years, innovative trade forms keep emerging, and trade liberalization and facilitation have risen to a new level.

Since the BRI was proposed, China’s trade with “Belt and Road” countries has increasingly expanded, and China has become the largest trading partner of 25 countries along the “Belt and Road”.

In addition, e-commerce has become a new engine of economic and trade cooperation. As of end 2020, China had signed MOU for “Digital Silk Road” with 16 countries, and established mechanism with 22 countries for “Silk Road e-commerce” cooperation.

The industrial parks China jointly built with “Belt and Road” countries have grown quickly into a main embodiment of economic and trade cooperation. As of end 2021, there were BRI industrial parks distributed across 46 countries, with a cumulative investment of $50.7 billion, contributing a total of $6.6 billion in tax revenues to the host countries, and creating 392,000 jobs for local communities. 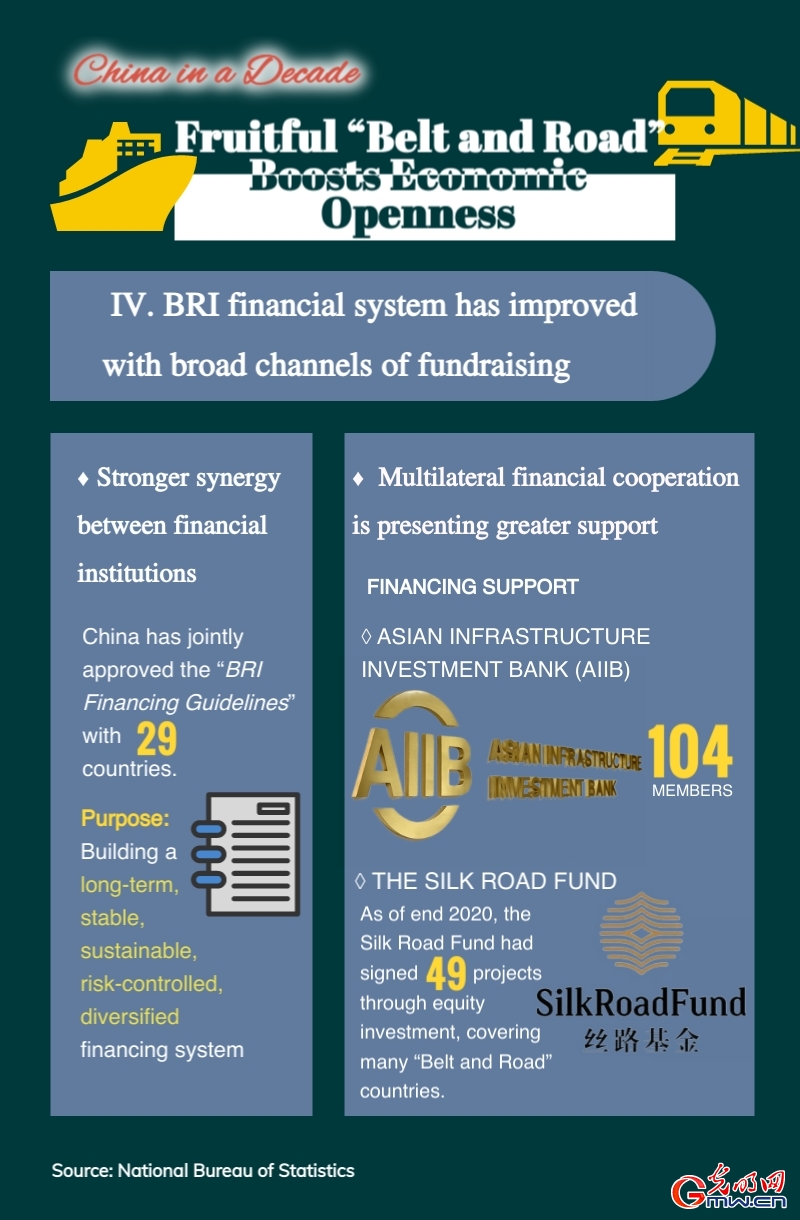 Finance is an important pillar of the BRI. China has actively carried out financial cooperation with "Belt and Road” countries and built a multi-level financial services system to provide diversified financial support.

China has jointly approved the “BRI Financing Guidelines” with 29 countries, the purpose of which is to combine the force of both government and market to build a long-term, stable, sustainable, risk-controlled, diversified financing system in association with “Belt and Road” countries, international organizations, and financial institutions as well as investors.

With the joint efforts of all parties, the Asian Infrastructure Investment Bank (AIIB), the Silk Road Fund and other multilateral institutions have been established one after another to provide investment and financing support for the BRI and bilateral and multilateral cooperation.

As of October 2021, AIIB members had increased from 57 in the early days to 104, second only to the World Bank, covering the six continents of Asia, Europe, Africa, North America, South America and Oceania.

As of end 2020, the Silk Road Fund had signed 49 projects through equity investment, covering many “Belt and Road” countries, and 70% of the funds were used for large-scale international projects such as power plants, infrastructure, ports, and high-end manufacturing. 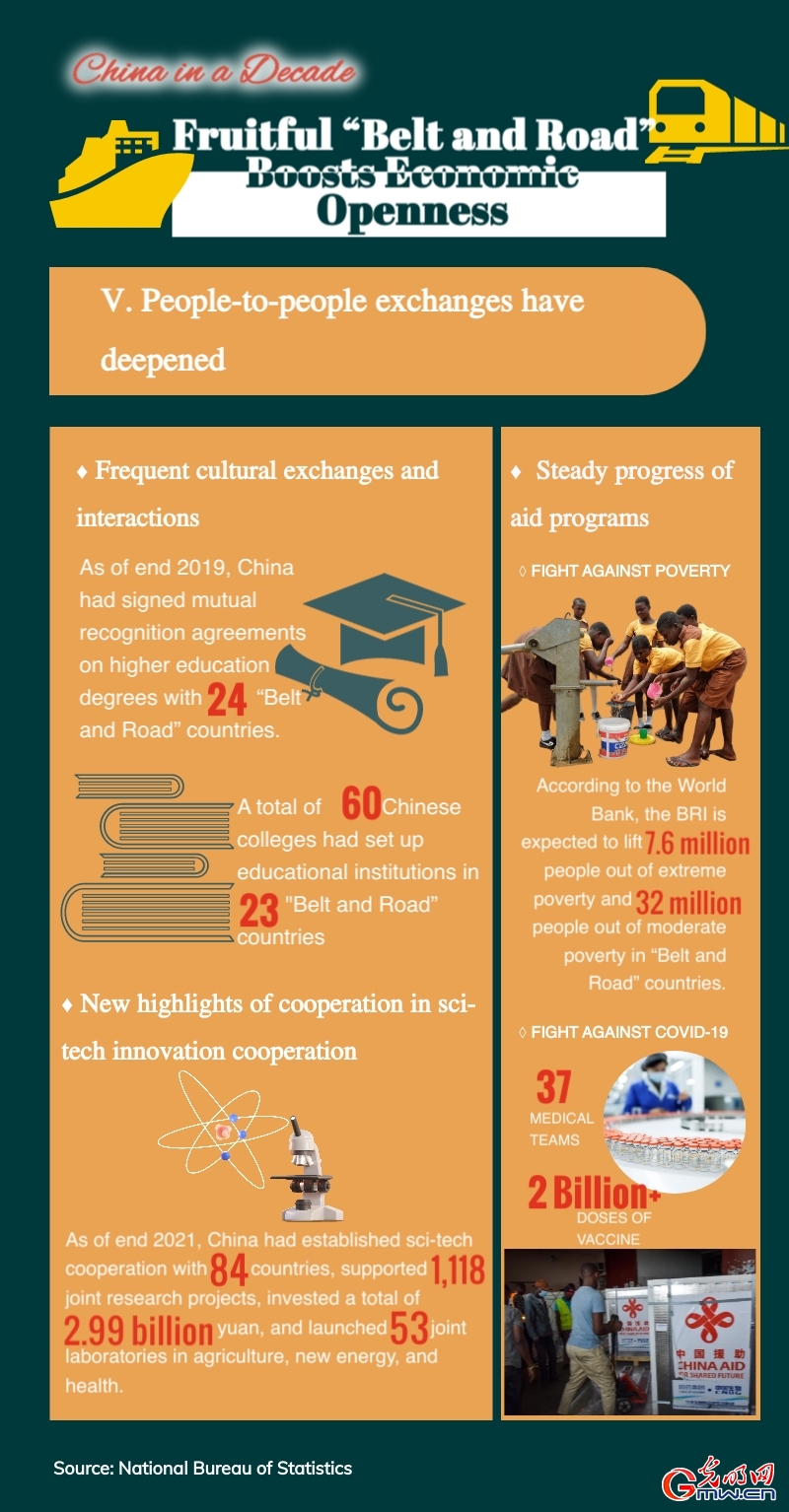 People-to-people exchanges hold the key to the joint construction of the BRI. In recent years, numerous exchanges have been conducted in culture, education, tourism, sci-tech innovation, and pandemic containment, which have consolidated the foundation of the BRI.

Since the BRI sci-tech innovation action plan was launched in 2017, China has deepened cooperation with “Belt and Road” countries in talents exchanges, joint laboratories, sci-tech parks, and technology transfers with a view to driving the new round of technological and industrial revolution. As of end 2021, China had established sci-tech cooperation with 84 countries, supported 1,118 joint research projects, invested a total of 2.99 billion yuan, and launched 53 joint laboratories in agriculture, new energy, and health.

China’s achievements in coordinating Covid-19 containment with economic growth have been recognized by the international community, and it has launched the Initiative for Belt and Road Partnership on Covid-19 Vaccines with 31 countries.

In 2020, China provided a huge number of medical materials such as protective clothing, masks and ventilators to 150 countries and 13 international organizations and dispatched 37 medical teams to 34 countries for the fight against Covid-19. As of end 2021, China had provided more than 2 billion doses of vaccine to more than 120 countries and international organizations, and a great part of the vaccines went to “Belt and Road” countries. The joint fight against Covid-19 has added new connotations to the BRI and deepened the friendship among “Belt and Road” countries.