Since the 18th CPC National Congress, the Party Central Committee with Comrade Xi Jinping as its core has made general plans to grasp the development trend of China and the world in the new era, carried out theoretical and practical innovation aimed at greater openness to the outside world, and brought the country's openness to the outside world to an unprecedented level. China's foreign trade has grown steadily with an optimized structure and consolidated position as a major trading country. Two-way investment has kept a robust momentum of synergy with higher efficiencies and returns, and China's global influence has significantly enhanced over the past decade.

I. Steady growth of both scale and quality of trade in goods 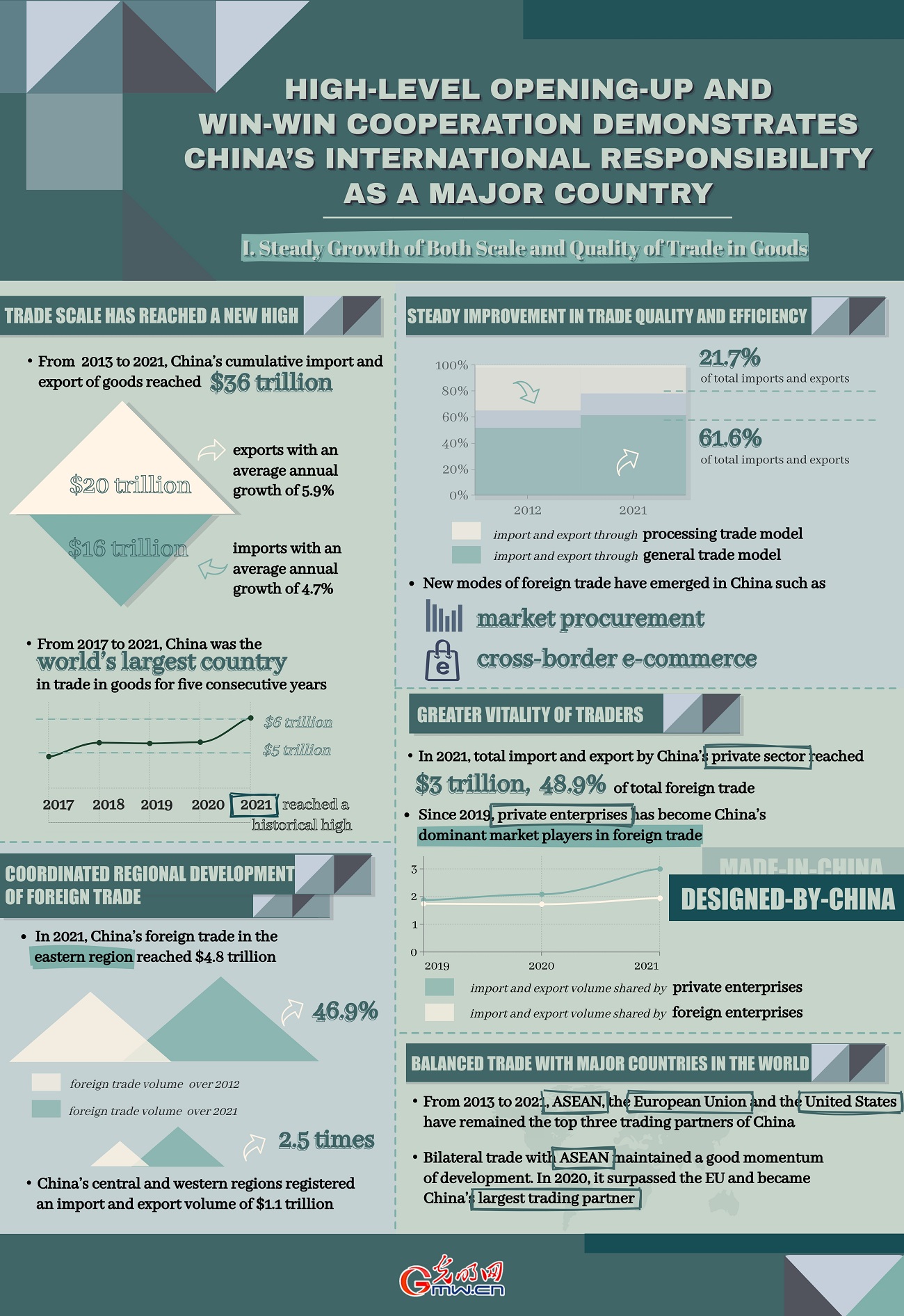 In 2021, China's foreign trade in the eastern region reached $4.8 trillion, an increase of 46.9% over 2012, with an average annual growth of 4.4%. During the same period, China's central and western regions registered an import and export volume of $1.1 trillion, 2.5 times more than in 2012 with an average annual growth of 10.7%, accounting for 17.7% of the total value of China's foreign trade during the same period, 6.6 percentage points higher than in 2012.

5. Balanced trade with major countries in the world

From 2013 to 2021, ASEAN, the European Union and the United States have remained the top three trading partners of China. China's import and export with Belt and Road countries maintained rapid growth and increased from 6.5 trillion yuan in 2013 to 11.6 trillion yuan in 2021, with an average annual growth rate of 7.5%, and its share in China's total foreign trade value increased from 25.0% to 29.7% during the same period. Bilateral trade with ASEAN maintained a good momentum of development, after surpassing the US in 2019 and becoming China's second largest trading partner, in 2020 it surpassed the EU and became China's largest trading partner.

II. Innovation and trade in services are injecting new momentum to opening-up

Since the 18th CPC National Congress, China has continued to deepen the reform and opening-up of its service industry, accelerated structural reform on the supply side, and improved the institutional mechanism of trade in services and increased its contribution to foreign trade growth. Trade in services has become an important pillar for the transformation and upgrading of China's foreign trade.

1. Rapid expansion of trade in services

Volume of trade in services continued to expand, ranking second in the world for eight consecutive years from 2014 to 2021. Between 2013 and 2021, China's cumulative service imports and exports reached 41.1 trillion yuan, an average annual growth rate of 6.4%, 1 percentage point faster than that of trade in goods. The growing competitiveness of service exports has led to a significant narrowing of the service trade deficit. In 2021, service exports grew 26.6 percentage points faster than imports, and service trade deficit fell by 69.5% year-on-year, reaching a record low since 2011.

2. Optimized structure of trade in services

With full implementation of the pre-entry national treatment plus negative list system, market entry has become easier for foreign investors. The legal interests of foreign investors are better protected with growing expansion of openness in the service sector. China's utilization of foreign investment is increasingly focused on structural upgrading and coordinated development, and open and harmonized economic and trade rules have become key factors attracting foreign investment to China. 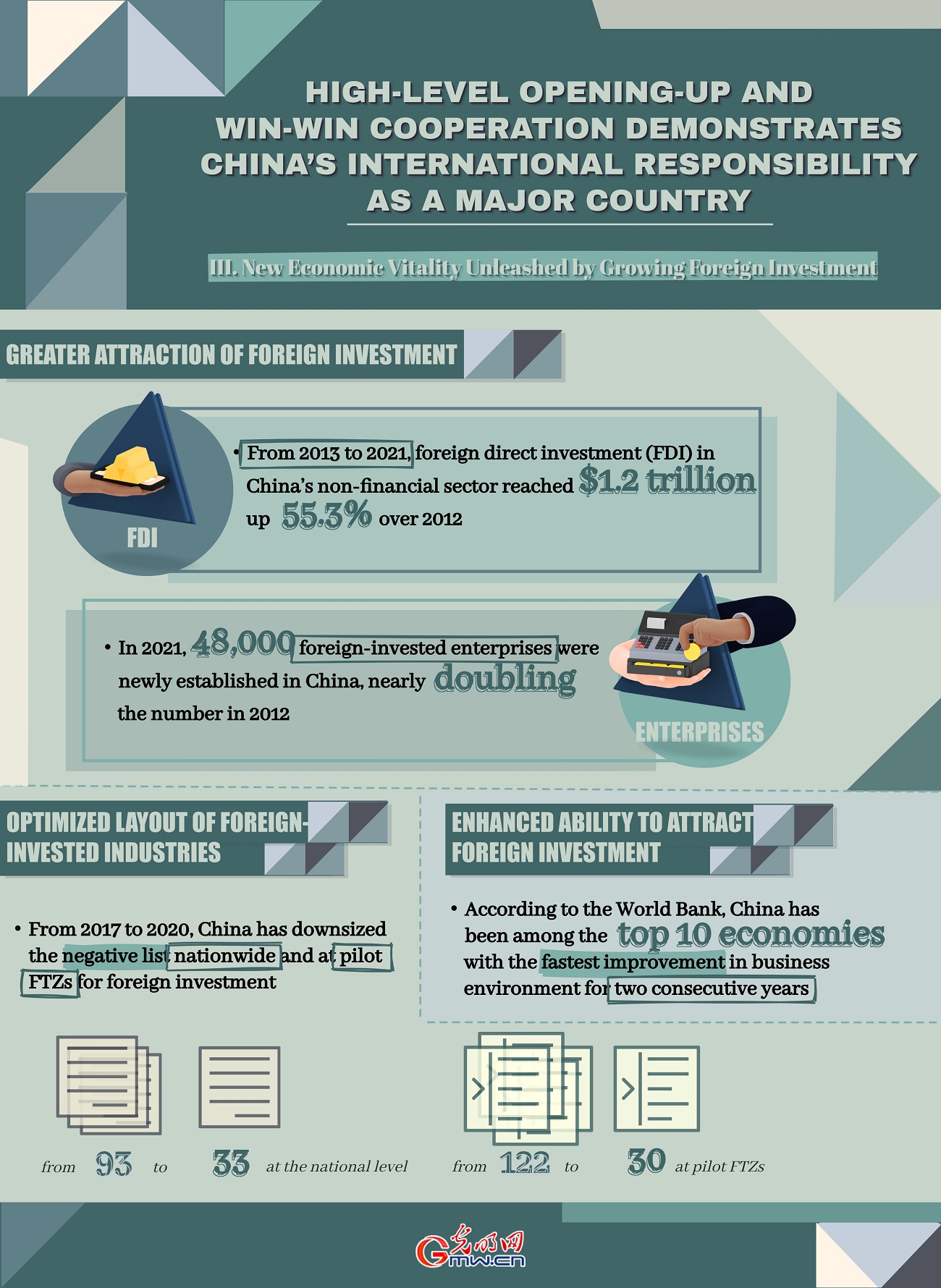 China has constantly guided investment to hi-tech industries, strategic emerging industries, modern services, and other industries. From 2017 to 2020, the negative list nationwide and at pilot FTZs for foreign investment had been reduced from 93 and 122 items to 33 and 30 items, respectively. At the same time, entry thresholds were further relaxed for foreign capital in financial services, high-end manufacturing, and electronic information services.

In 2020, China introduced the Law of the People's Republic of China on Foreign Investment, refined its legal framework and implemented the pre-entry national treatment plus negative list system for foreign investment, which has become an important legal guarantee for high-level opening-up to the outside world. According to the World Bank, China has been among the top 10 economies with the fastest improvement in business environment for two consecutive years.

IV. China has fine-tuned its economy to deepen cooperation in foreign investment

Since the 18th CPC National Congress, China has built a new system of open economy, implemented a more proactive open strategy, simplified the FDI management mode from approval to filing, and deepened international economic cooperation through bilateral and multilateral FTAs. At the same time, cooperation projects under the Belt and Road Initiative have expanded, and the number of multinational companies is continuously increasing. 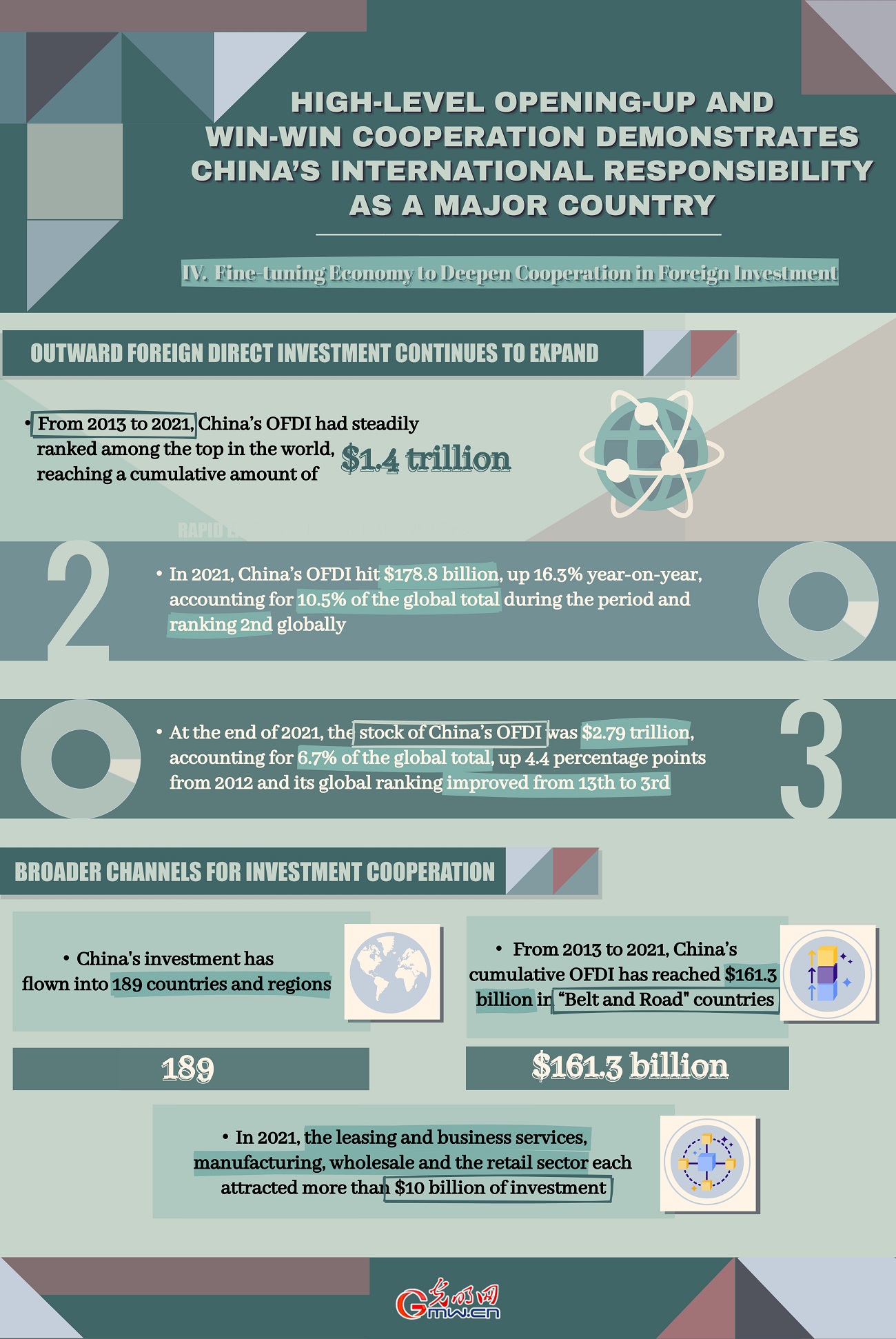 China's investment has flown into 189 countries and regions. From 2013 to 2021, China's outward investment in countries along the Belt and Road had grown rapidly, with cumulative OFDI reaching $161.3 billion in Belt and Road countries, making positive contributions to the economic growth of host countries.

Since the 18th CPC National Congress, China's pilot FTZs have dovetailed economic and trade rules with the world and expanded free trade cooperation with the outside. The expansion of FTAs and the level of openness in many areas have gone beyond the commitment China made while joining the WTO. 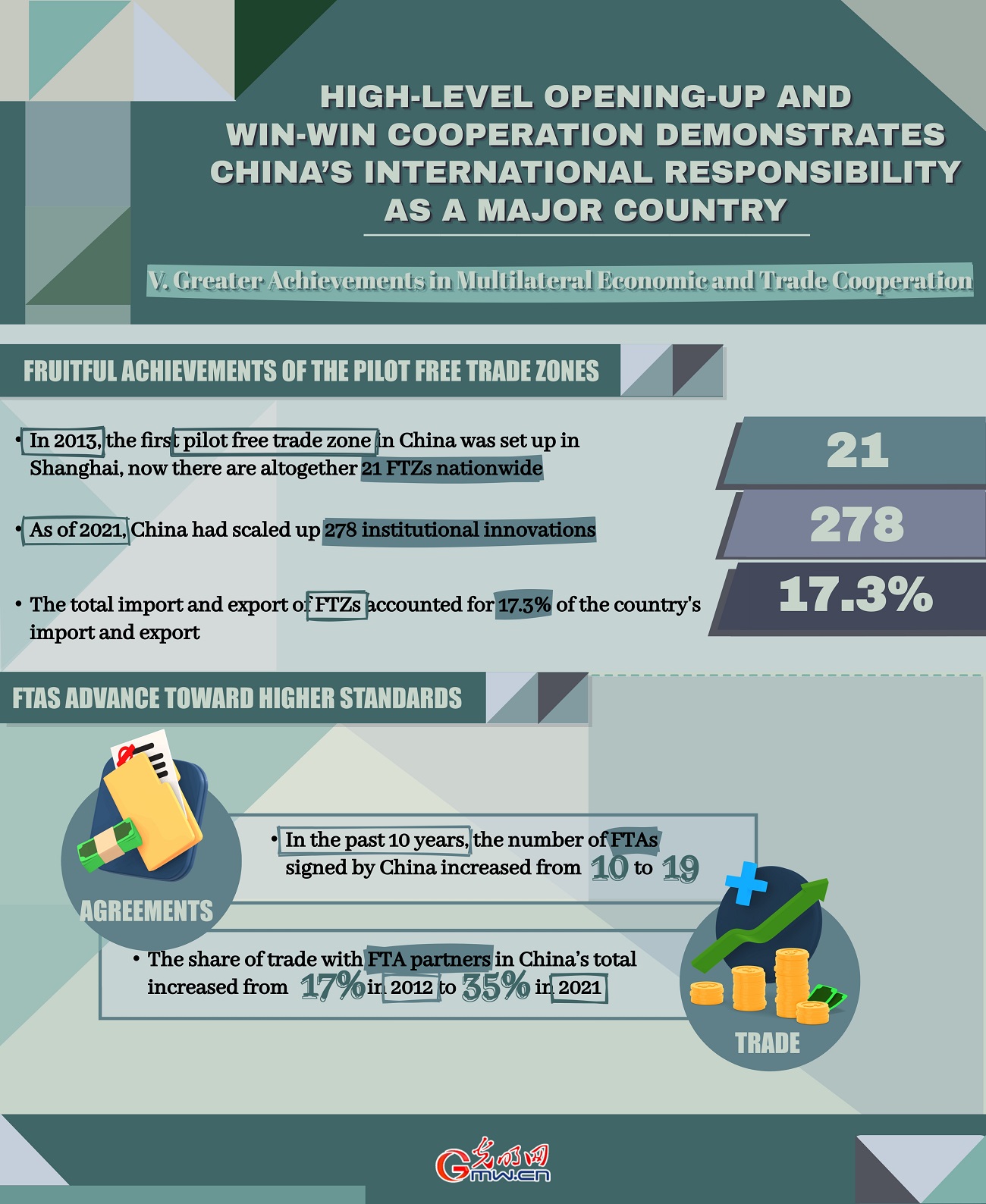 In 2013, the first pilot free trade zone in China was set up in Shanghai, now there are altogether 21 FTZs nationwide. As of 2021, China had scaled up 278 institutional innovations nationwide, and the total import and export of FTZs accounted for 17.3% of the country's and the FDI they received accounted for 18.5% of China's total. In 2021, China issued the "Special Management Measures for Cross-border Trade in Services in Hainan Free Trade Port (Negative List) (2021 Edition)", which was the first negative list in China's cross-border trade in services and represented the highest level of openness to the outside world.

In the past 10 years, the number of FTAs signed by China increased from 10 to 19, and the share of trade with FTA partners in China's total increased from 17% in 2012 to 35% in 2021. On January 1, 2022, the Regional Comprehensive Economic Partnership Agreement (RCEP) came into effect, marking the launch of the world's largest FTA in terms of economic and trade scale and population. China is also actively participating in FTA negotiations on digital economy and environmental protection, and has taken new steps toward the goal of a high-standard FTA by advancing negotiations of the Comprehensive and Progressive Trans-Pacific Partnership (CPTPP) and the Digital Economy Partnership Agreement (DEPA).